Effects of Vegetation Strips, Fertilizer Levels and Varietal Resistance on the Integrated Management of Arthropod Biodiversity in a Tropical Rice Ecosystem

Integrated biodiversity management aims to conserve the beneficial species components of production ecosystems and reduce the impacts of pests. In 2011 and 2013, experiments were conducted at Los Baños, Laguna, Philippines, to compare arthropod communities in rice plots and on levees with and without vegetation strips. Vegetation strips included spontaneous weeds, sesame and okra (2011), or mung bean (2013). The plots were treated with one of three nitrogen levels and in one experiment were planted with planthopper-resistant (IR62) and susceptible (IR64) rice varieties. Parasitoids and predators of lepidopteran pests and of the ricebug, Leptocorisa oratorius, were more abundant in high-nitrogen rice plots where their prey/hosts also had highest densities. Planthoppers and leafhoppers were more abundant in low-nitrogen plots. Weedy and sesame/okra bunds provided habitat for a range of natural enemies including spiders, parasitoids and predatory bugs, but did not have higher pest numbers than cleared bunds. Higher abundances of the predator Cythorhinus lividipennis and higher parasitism of planthopper (Nilaparvata lugens) eggs by Anagrus sp. were associated with sesame/okra bunds in late season rice plots. Mung bean also provided habitat for key predators and parasitoids that spilled over to adjacent rice; however, mung bean was also associated with higher numbers of lepidopteran and grain-sucking pests in the adjacent rice, albeit without increased damage to the rice. For ricebug in particular, damage was probably reduced by higher parasitoid:pest ratios adjacent to the vegetation strips. Varietal resistance and mung bean strips had an additive effect in reducing abundance of the planthopper Sogatella furcifera and the leafhopper Nephotettix virescens. Reduced numbers of these latter pests close to vegetation strips were often compensated for by other plant-sucking bugs, thereby increasing the intensity of potentially stabilizing interspecific interactions such as competition. We highlight the benefits of diversifying rice landscapes and the need to optimize vegetation strips, e.g., by including lepidopteran trap-plants, for intensive rice production systems. View Full-Text
Keywords: agroecology; ecological engineering; IPM; Philippines; key rice pests agroecology; ecological engineering; IPM; Philippines; key rice pests
►▼ Show Figures 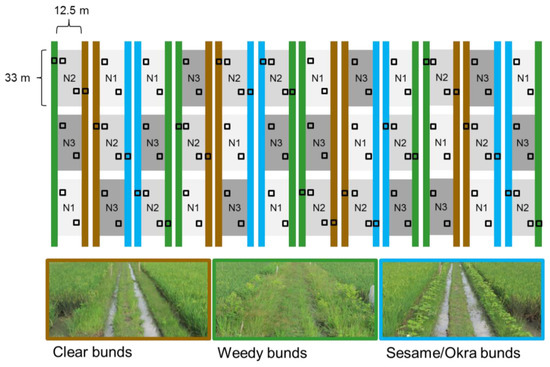