High-Speed Measurements of Steel–Ice Friction: Experiment vs. Calculation
Next Article in Special Issue

A flow of a thin layer of liquid is simulated on a flat surface of a body located in a stream of air. Liquid film on the surface of the body reduces frictional resistance and can be used as a boundary layer control element. The paper presents a mathematical model of the film flow on a half-plane, located at an angle to the horizon. The fluid flow is determined by the force of gravity and friction from the external air current. A model of an incompressible viscous fluid is used in the boundary-layer approximation. The terms of the motion equation are averaged over the film thickness according to the Leibniz rule. In the cross section of the film, a quadratic law is adopted for the distribution of the longitudinal velocity, taking into account friction on the film surface. An analytical solution of the problem is obtained in the form of series in powers of the small parameter for determining the film thickness and the average longitudinal velocity along the length of the plate. It is shown that the friction decreases with flow around a half-plane with a film of liquid on the surface.
Keywords: film; liquid; boundary layer; current; friction; small parameter film; liquid; boundary layer; current; friction; small parameter

Problems of liquid film flow are quite often encountered in technical applications and are discussed by many authors. Paper [1] presents the results of investigation of films for a gas-liquid two-phase flow in short horizontal pipes. The obtained results are compared with the experimental data. In paper [2], the dynamic characteristics of the film flow with a counter-flow of air are given. The calculated data is experimentally confirmed.
A three-dimensional dynamic model of film flow on a cylindrical surface is considered in paper [3]. The film is affected by force of gravity and surface tension, as well as the strength of resistance from the counter flow of gas. In paper [4], the solution of the conjugate problem for the air flow over a flat plate with a thin liquid film on the surface is presented. The film is formed by extruding liquid from a porous wall. In paper [5], the film is formed from the external medium. A mathematical model is obtained for the zero approximation. The results of theoretical and numerical studies of liquid films are presented in papers [6,7], and experimental studies have been performed in [8,9,10].
A model of a thin film flow along an inclined plane is presented in paper [11]. The terms of Navier–Stokes equations and the energy equations are averaged over the depth of the liquid. A mathematical model of thin film evaporation was proposed in paper [12]. In paper [13], experimental results and numerical modeling of the night flow on a cooled wall are presented. The measurements were carried out on a flat plate. The problem of condensate film stability on a vertical surface is analytically studied in paper [14]. An analytical model for the laminar flow of a condensate film on the outer surface of an isothermal vertical pipe is presented in [15].
Despite the large number of works on the flow of liquid films, there is still a considerable interest in this phenomenon. Liquid film on the surface of the body reduces friction resistance and can be used as a control element for the boundary layer. In this study, the flow of a thin layer of liquid on a flat surface of the body in the airflow is simulated for its ability to reduce frictional resistance.

As an element of the surface, we choose a plane and consider the steady-state flow of a liquid film under the action of gravity and the incoming air flow (Figure 1). The film is formed by squeezing the liquid through the porous surface of the plate, which is located at angle to the horizon. The liquid flows evenly into the film at speed.
In the boundary-layer approximation, the mathematical formulation of the problem has the form
The boundary conditions of the problem will have the following form where pressure, density, ,kinematic and dynamic viscosity, g—acceleration of gravity, tangential stress at the boundary between the film—the incoming air flow.

Combining the equation of motion (8) with the continuity equation, obtain the conservative form
We carry out the averaging of the terms entering into Equation (5) over the thickness of the film.
For this purpose, we integrate (10) with respect to y from 0 to , using the Leibniz rule (derived from an integral with a variable upper limit)
We use the definition of the mean longitudinal flow velocity
The integral of the first term of Equation (5) is written in the form (the complete derivative can be replaced by a partial one)
Since the thickness of the film is sufficiently small, the viscous forces will play a decisive role in the formation of the flow. In this case, we can take for the longitudinal velocity the quadratic law of variation of the longitudinal velocity in the cross section of the film. We use the expression for the velocity of a film of constant thickness that flows along a flat vertical wall, taking into account friction on the surface
Average flow velocity
Taking into account (10), the longitudinal velocity (9) can be rewritten
For the problem under consideration, the average flow velocity , the friction on the surface of the film , and the thickness of the film are functions of the coordinate x.
Using (11) we write the following expressions
Using the obtained expressions (11)–(15), we rewrite the equation of motion in the following form
We write down the law of conservation of mass, for which we integrate the continuity Equation (2) with from to
Taking into account expressions (12) and (17), Equation (16) can be rewritten
If we exclude a neighborhood of a point , then , in the first approximation, the continuity equation takes the form
We introduce dimensionless variables and, taking into account (20), Equations (18) and (19) take the form initial conditions of the task
Calculation of friction is feasible according to the approximate model. The film thickness is sufficiently small and it can be neglected, then the friction value is determined from the Blasius problem
For the speed of the oncoming stream , and the length of the wall m. Reynolds number , which corresponds to laminar flow. If the injection of the mass is carried out by slightly receding from the edge of the plate, then the distribution of friction on the surface of the film can be considered a constant value and take its average value
Moving to dimensionless quantities, we obtain .
Note that for the initial data (liquid-water at temperature ), , dimensionless coordinate is a small quantity , that is .
Consequently, the solution of Equations (21) and (22) can be represented in the form of series in powers of the small parameter
The coefficients and are determined by substituting the expansions (24) into (21) and (22) and equating the coefficients to zero for identical powers of .

For we get for the solution takes the form
Graphs (Figure 2, Figure 3 and Figure 4) present comparative flow characteristics, where , .
Then we consider air stream flow by a flat plate (the Blasius problem), but with a movable wall boundary conditions
Such a formulation allows a self-similar solution for (for the problem it is unjustifiably more complicated).
Let us calculate the average velocities on the surface of the film (for , ; , ) and perform the numerical solution of problem (27).
The results are shown in the graph (Figure 5) in the form of friction distribution on the plate surface, where curve 1, as before, denotes the slope angle , and distribution 3 is the solution of the classical Blasius problem.
For the slope of the plate , the results are between 1 and 3. The friction reduction, calculated from the average value, is 14.6%.

An analytical solution of the problem is obtained for the average velocity and film thickness in the form of series in powers of the small parameter with allowance for the zero and first approximations. Dependency curves are constructed for the film thickness and the average longitudinal velocity on the length of the plate. The calculation of friction is based on an approximate model. The friction is reduced with the air flow around the plate. The obtained results can be used to calculate the frictional resistance, which is a component of the aerodynamic drag of an aircraft.

Nikolay Klyuev developed a mathematical model and wrote the methods and solutions section and conclusions section. Konstantin Polyakov performed numerical calculations, wrote the Results and discussion section and translated the article into English. Alyona Krutovertseva found scientific articles on the subject of research and wrote an introduction and references section. 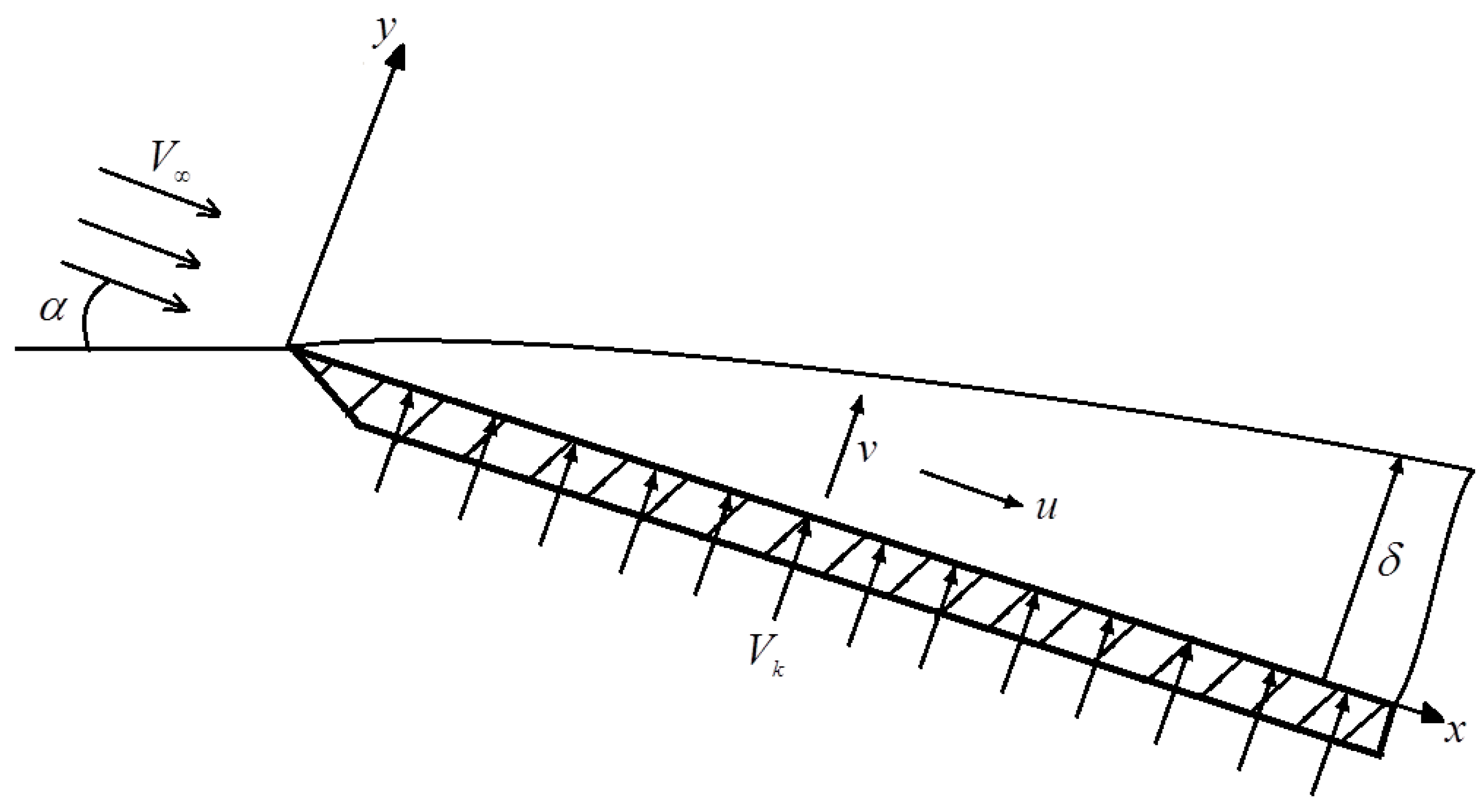 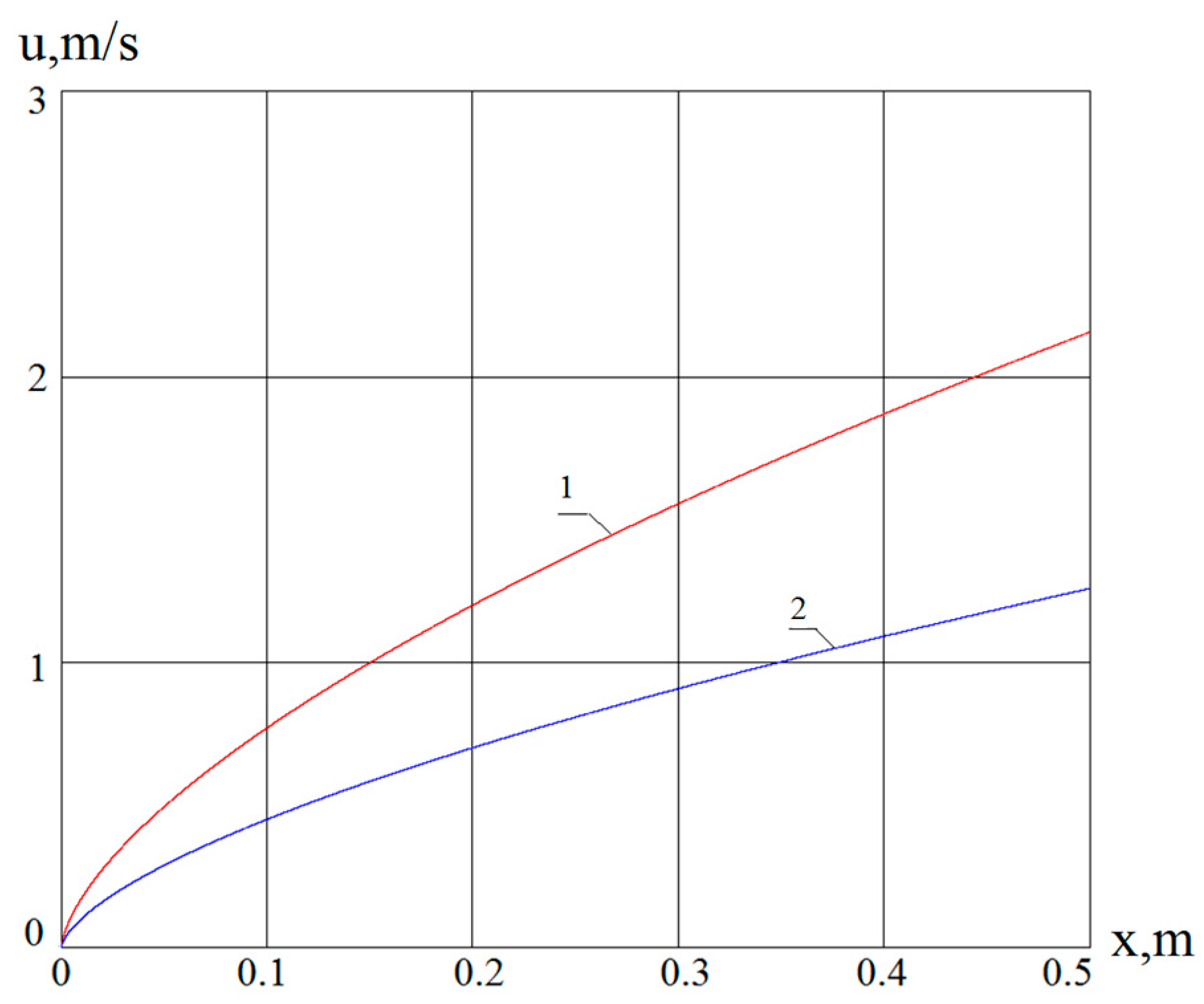 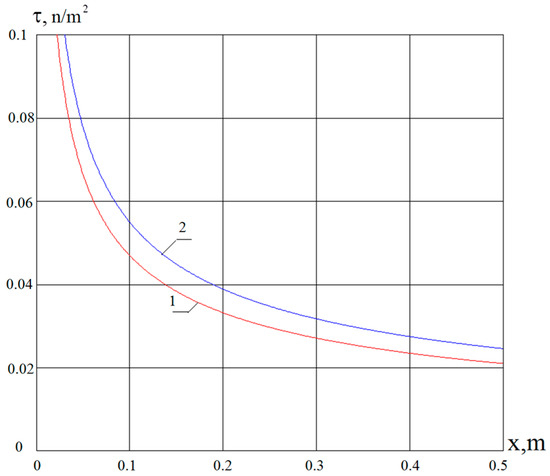