On the Characteristics of Misaligned Journal Bearings
Previous Article in Journal

:
With the demand for turbomachinery to operate at higher speeds, loads, and power, fluid film bearings that support turbomachinery must be capable of operating in these more demanding applications. Thrust bearings operating at high speeds and loads can experience high surface temperatures and thin fluid film thickness. Typically, babbitt (white metal) is the bearing lining material for most turbomachinery bearings but is limited in operating temperature and allowable film thickness. Polymer based materials are alternative materials that can operate at high temperatures and with thin films and have been in use for many decades in high load applications, such as electric submersible pumps (ESP). Test results of polymer lined thrust bearings subjected to modern turbomachinery speeds and loads are presented and compared to babbitt lined bearings of the same design and under similar conditions. The test results show polymer lined thrust bearings can operate at higher bearing unit loads than babbitt.
Keywords:
hydrodynamic bearings; high speed; polymer; PEEK; thrust bearing; performance; experimental

Polymers have been used as fluid film bearing material for decades. Polytetrafluoroethylene (PTFE) and Polyether ether ketone (PEEK) are two common polymer-bearing materials. Mostly due to PTFE’s low friction coefficient at start-up and high load capacity, it is widely used in hydro turbine thrust bearings in both Russia and China; European interest is picking up.
When used as a bearing material PEEK is typically combined with additional materials for better strength and tribology performance. PEEK bearings are widely used in pump applications using process fluids, such as water as the lubricant. PEEK is also a preferred material in oil lubricated thrust bearings, such as in ESP applications, primarily because PEEK operates at temperatures as high as 250 °C while retaining good bearing qualities. However, pump and ESP applications do not approach typical and future operating conditions of modern turbomachinery applications, such as steam turbines, gas turbines and compressors. In most turbomachinery, babbitt is still the dominant bearing material even though fluid film bearings are being required to operate under higher speeds and higher loads than previously required. The continued use of babbitt bearings in these high demand applications is partially due to lack of understanding of PEEK bearing performance in those applications, especially in high speed conditions.
Active research focuses on tribological, wear and mechanical performance of PEEK and reinforced PEEK materials and the relative merits of different polymer materials, as presented by multiple resources [1,2,3,4,5]. A good summary of research effort on PEEK based materials is given by Quadrini and Squeo [6]. However, publication on PEEK bearing performance is quite limited. Some examples of PEEK bearing applications are presented by Pethybridge and New [7]. Ricci, et al. [8] compared oil-film pressure and pad temperature distribution of PTFE and PEEK lined pads predicted using multi-physics modeling. Quadrini and Squeo [6] have presented unlubricated performance of PEEK bushes.
PTFE and babbitt comparisons have been published by Ettles, et al. [9]. A comparison of PEEK and babbitt has not been published for high speeds and loads. This paper presents experimental data of load capacity, power loss and pad temperature of a high speed oil lubricated PEEK lined thrust bearing assembly with pads of approximately 62.5 mm × 62.5 mm size under two speeds. Also, a direct comparison between PEEK lined and babbitt lined bearing test results is given.

Testing was performed on the Large Horizontal Thrust Rig (LHTR), as shown in Figure 1. Load is applied to the load piston on the left side of the LHTR with a 20.6 MPa hydraulic pump load cart. Force is applied through the load bearing to the collar, forcing the shaft to the right. The load and the movement of the shaft are then countered by the test thrust bearing in the test section, as shown in Figure 1.
The LHTR shaft is driven by two 375 kW DC motors for a total of 750 kW. Flexible couplings are used to connect the test shaft, gearbox, and motors in a simple train. ISO VG32 mineral oil from a 5678 L reservoir is supplied to the load thrust bearing, the test thrust bearing, and the support journal bearings by an 1136 lpm oil pump. Oil flow to each bearing is individually controlled. Oil inlet temperature can be maintained and controlled with the help of in-line heaters, an immersion heater and an oil to air heat exchanger.

Both test bearings are 279 mm tilt pad thrust bearing with 8 pads each. The bearings are equalized by mechanical levers and are designed with direct lubrication (DL). Lubrication is delivered through the bearing to individual pad stops that are located between the thrust pads. Lubrication is then distributed through holes in each pad stop and directed into the pad film. DL is another key design feature for high-speed applications since it reduces power loss and oil temperature significantly, as shown by New [10].
Four of the eight pads are instrumented with a Type-T thermocouple. Instrumented pads are evenly distributed in the assembly, as shown in Figure 2. The thermocouples are installed in the steel backing material nominally 0.8 mm below the bond line. The thermocouples are located circumferentially over the pivot and radially half way from the pad inside to the outside diameter. With the pivot being offset 60% circumferentially from the pad leading edge; the location is noted as the 50/60 location, as shown in Figure 3.

Both PEEK lined pads and babbitt lined pads were tested. Pad backing material for both types of pads is steel. The test bearing with PEEK lined pads is shown in Figure 2. Again, the only difference between the two test bearings is the pad bearing (face) material, while all other features are the same.
The load capacity of each bearing material, for the test conditions, was determined by increasing the load until there was an indication of bearing damage or film breakdown. The PEEK lined bearing was tested at 6000 rpm and 11,000 rpm, and the babbitt lined bearing was tested at 11,000 rpm. For all tests, the oil inlet temperature was set to 48.9 °C, and the oil flow rate was set to 125 lpm.
The test started by rotating the test shaft at a specified speed without any load to achieve the specified oil inlet temperature. Load was gradually increased to 6.9 MPa and was allowed to dwell at this load until the test rig temperature stabilized. Then, for the PEEK lined thrust bearing tests the load was increased in 0.34 MPa steps until one of the following conditions was observed: (1) a sudden pad temperature increase; (2) a sudden pad temperature drop; (3) an abnormal test rig noise or (4) the motors seized. The babbitt lined bearing was also tested with a similar test procedure but with a lower starting load and smaller load steps.
A summary of the bearing size and test conditions is presented in Table 1.
Table 1. Bearing size and test conditions.
1 Polyether ether ketone (PEEK) Only. 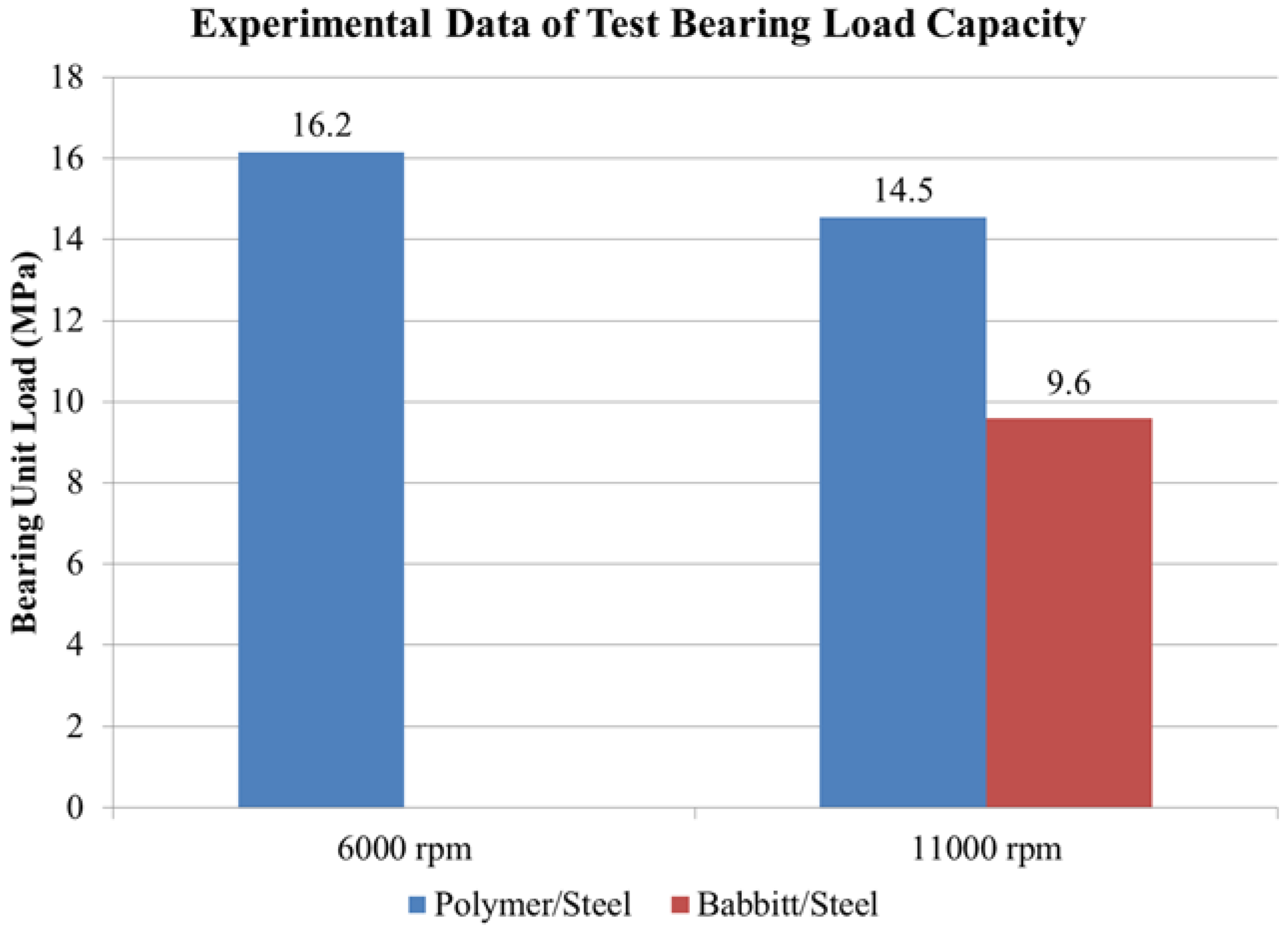 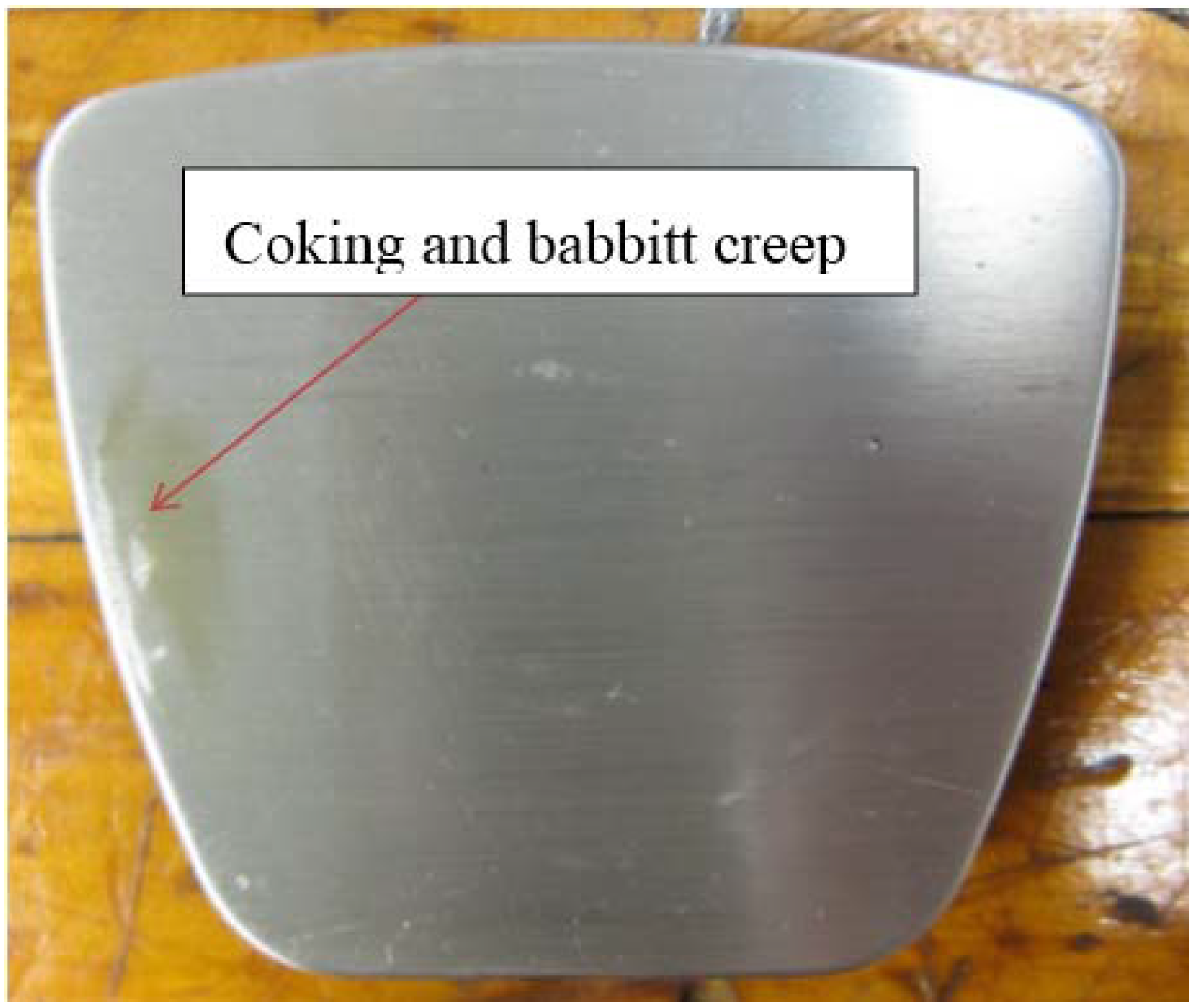 Figure 8 plots the measured power loss, as determined by heat balance of the bulk oil, of both bearings for the test conditions and bearing configuration. The power loss is calculated as where Q is the oil flow rate, is the oil density, is the oil specific heat, is the oil discharge temperature and is the oil inlet temperature.

Three factors limiting the load of a babbitt bearing were presented in [11]. They are fluid film thickness, material’s temperature, and mechanical strength of the bearing material and of the pad support, such as pivot and lever contact. These same limiting factors can be applied to PEEK lined bearings. A PEEK bearing material can withstand higher temperatures than babbitt and will retain its mechanical strength at elevated temperatures better than babbitt, as shown in Table 2.
Table 2. Material properties.
As illustrated in Figure 4, the load reached by the test thrust bearing at 11,000 rpm increased 51% from 9.6 MPa to 14.5 MPa simply by changing bearing lining material from babbitt to PEEK. The importance of this fact is that a PEEK lined thrust bearing can be designed as either (1) a smaller sized thrust bearing for the same applied load than a babbitt lined bearing, resulting in much lower power losses and lubricant flow rate requirements; or (2) a thrust bearing of the same size as a babbitt lined bearing that can withstand 50% more load.
Also shown in Figure 4, the 16.2 MPa load reached by the PEEK lined pads at 6000 rpm is 11% higher than that at 11,000 rpm, which was 14.5 MPa. Because the 11% difference is insignificant, the minimum film thicknesses is not the main reason for the load limiting since film thickness is speed dependent and is expected to be thicker for the higher speed, which it was not.

This paper presents the load capacity test data and associated performance data of oil lubricated PEEK lined tilt pad thrust bearing under two speeds for the first time. Results show that:
Based on the test results, polymer lined thrust bearings can operate at higher bearing unit loads than babbitt lined bearings for the studied conditions. When babbitt cannot meet high speed and load requirements, it is recommended to consider alternative materials, such as bearing grade PEEK, for those applications for its higher working load, higher working temperature, and, thus, higher safety margin.

The authors would like to thank the Waukesha Bearings Corporation for permission to publish this paper and express their gratitude to all who assisted in its preparation.