Ramification of Hall and Mixed Convective Radiative Flow towards a Stagnation Point into the Motion of Water Conveying Alumina Nanoparticles Past a Flat Vertical Plate with a Convective Boundary Condition: The Case of Non-Newtonian Williamson Fluid

:
Heat transfer technologies are experiencing rapid expansion as a result of the demand for efficient heating and cooling systems in the automotive, chemical, and aerospace industries. Therefore, the current study peruses an inspection of mixed convective radiative Williamson flow close to a stagnation point aggravated by a single nanoparticle (alumina) from a vertical flat plate with the impact of Hall. The convective heating of water conveying alumina (Al2O3) nanoparticles, as appropriate in engineering or industry, is investigated. Using pertinent similarity variables, the dominating equations are non-dimensionalized, and after that, via the bvp4c solver, they are numerically solved. We extensively explore the effects of many relevant parameters on axial velocity, transverse velocity, temperature profile, heat transfer, and drag force. In the opposing flow, there are two solutions seen; in the aiding flow, just one solution is found. In addition, the results designate that, due to nanofluid, the thickness of the velocity boundary layer decreases, and the thermal boundary layer width upsurges. The gradients for the branch of stable outcome escalate due to a higher Weissenberg parameter, while they decline for the branch of lower outcomes. Moreover, a magnetic field can be used to influence the flow and the properties of heat transfer.
Keywords:
MHD; Hall effects; nanofluid; radiation; Williamson fluid

The magneto-mixed convective Williamson fluid flow via a stagnation point stimulated by nanoparticles via a vertical flat plate with thermal radiation and Hall current effects is considered. The convective boundary condition is also examined. The problem of nanofluid flow is schematically shown in Figure 1, where the positive and coordinates deliberate along and normal to the flat plate in the trend of motion and toward the fluid, respectively, while the axis coordinate is transverse to the plane. There is a significant external magnetic impact in the corresponding direction. Due to the exceedingly low persuasive Reynolds number, the induced magnetic influence is also disregarded. The Hall impact cannot be disregarded because the strength of electron–atom collisions is assumed to be quite strong [49]. The flow becomes three-dimensional as the Hall current becomes stronger in the respective direction, causing a crossflow in that direction. To get around this issue, we presupposed that flow amounts in the direction had not changed. The flat plate must have infinite lengths in that direction for this to be true. It is also believed that the plate is electrically non-conducting and that is applied uniformly across the flow according to the generalized Ohms’ law [50]. The governing equations for controlling the flow, along with Boussinesq approximations, are provided as per these presumptions [35,37]. subject to the boundary conditions are
Fourier’s law of heat conduction, which is expressed in differential form by Equation (5), asserts that the rate of heat transmission through a medium is inversely proportional to the negative gradient in the temperature per area. Further, in these above equations, are the components of velocity in the , and directions, respectively, is the Hall current parameter, is the time constant, is the viscosity of the nanofluid, is the density of the nanofluid (NF), and signify the temperature and the free-stream temperature, the radiative heat-flux, the coefficient of heat transfer, the nanofluid EC, is the NF thermal conductivity, the gravitational acceleration, and the NF heat capacity. These are demonstrated as [23,24,30,51]: where signpost the thermal conductivity of the solid nanoparticles and the regular-based fluid (water), respectively. Additionally, signifies the solid nanoparticles volume fraction, which is here the sum of the single nanoparticles and the regular fluid (water). In addition, , designate the coefficient of thermal expansion of the nanoparticles and base fluid respectively, , signpost the electrical conductivity of the solid nanoparticles and the basic fluid, and and signify the density of the nanoparticle and base fluid, respectively. Moreover, the remaining subscripts in the above equations defined as and are called the based fluid and the nanofluid. The thermophysical data of the base fluid (water) and the (Al2O3/water) nanofluid are written in Table 1.
The radiative heat-flux is articulated as [26]: where and indicate the absorption coefficient and the Stefan–Boltzmann constant, respectively. Utilizing Equation (12), Equation (4) can be written as
To ease the analysis of the given nanofluid problem, the following self-similarity variables are introduced [35,39]: where presents the stream function and it is distinguished as and .
With the aid of Equation (14), the nonlinear Equations (2), (3), and (13) yield the following nonlinear ODEs: and the transformed subjected boundary conditions are: where denote differentiation with respect to the pseudo-similarity variable In addition, the aforementioned similarity equations comprised different influential controlling parameters which are symbolically and namely written as follows:        and imply the magnetic parameter, the mixed convective parameter (which is the ratio of the Grash of number and the square of the local Reynolds number), the Prandtl number, the radiation parameter, the Weissenberg parameter, and the convective parameter, respectively.
The important physical quantities of interest are the skin frictions in axial and transverse directions and the local Nusselt Number, which is stated as [35] where and are the shear stresses for the Williamson nanofluid flow in the axial and transverse directions, respectively. Meanwhile, is the heat flux, which is stated as:
Using (14), we get where is called the local Reynolds number.

This enquiry has looked at the cumulative effects of MHD and Hall current on the flow of a Williamson fluid incorporated by nanofluid through a vertical flat plate that has been convectively heated while being exposed to thermal radiation. The converted system of ODEs has been numerically solved using the bvp4c solver for various values of the pertinent parameters. From this study, the following findings can be made:

Did not report any data. 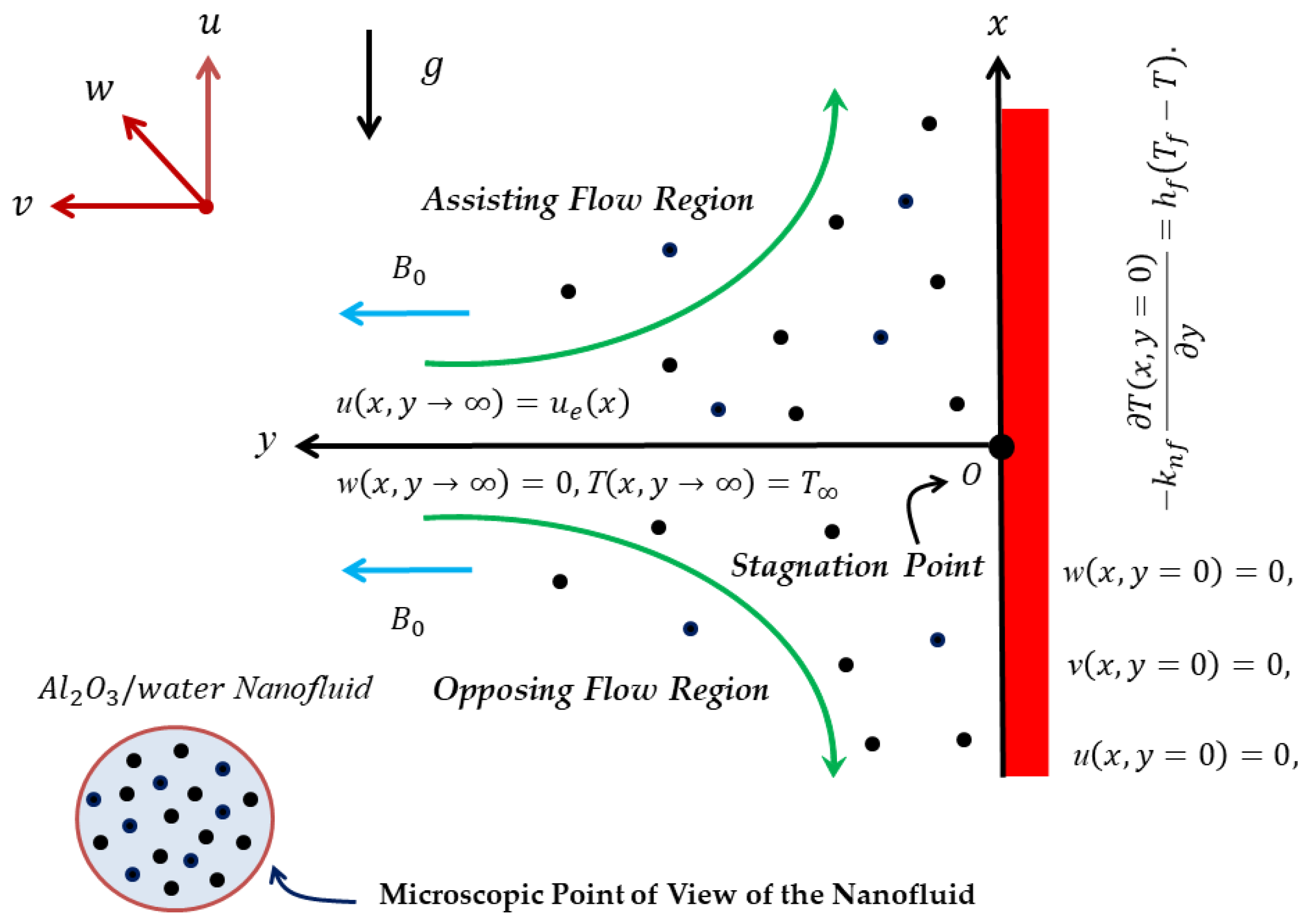 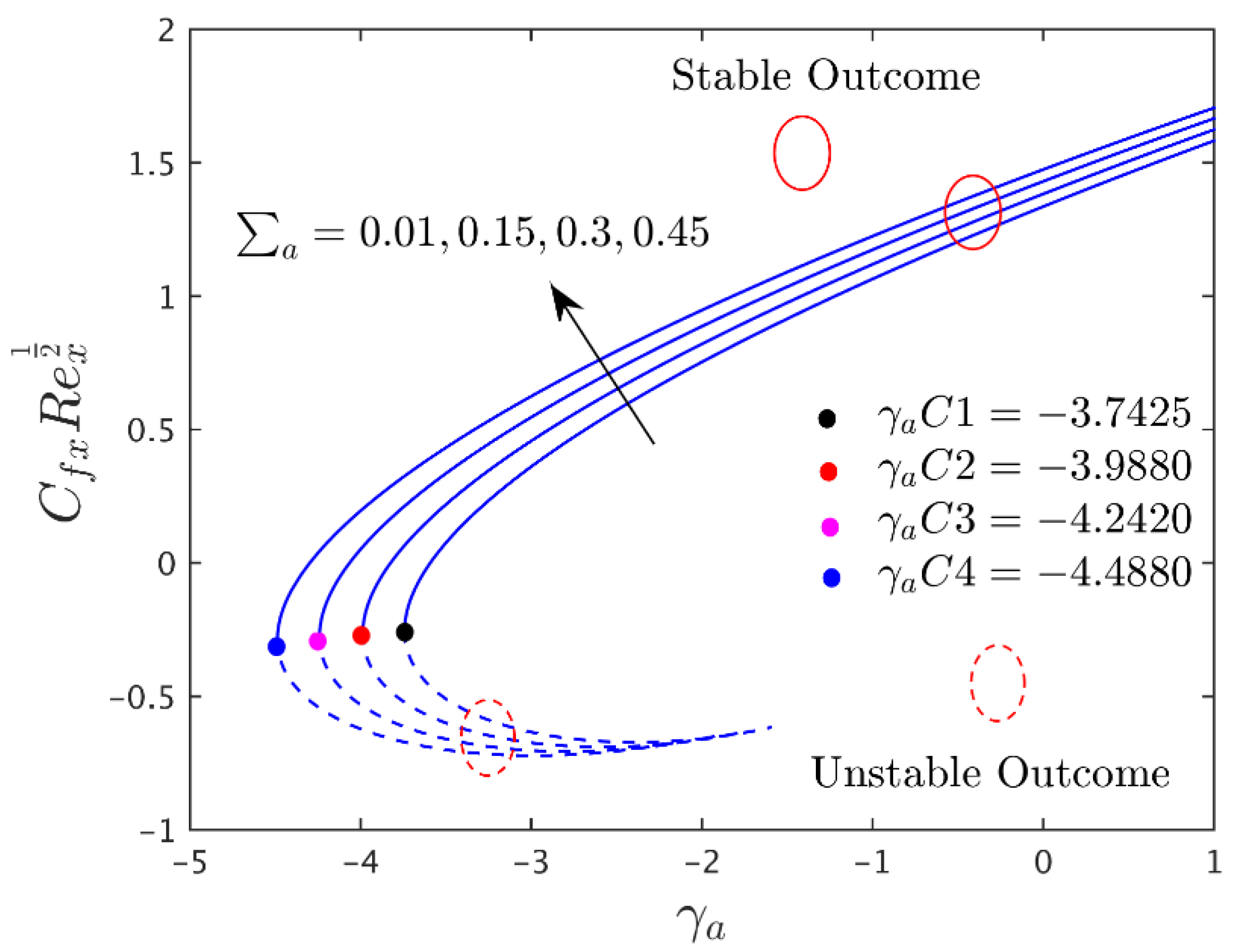 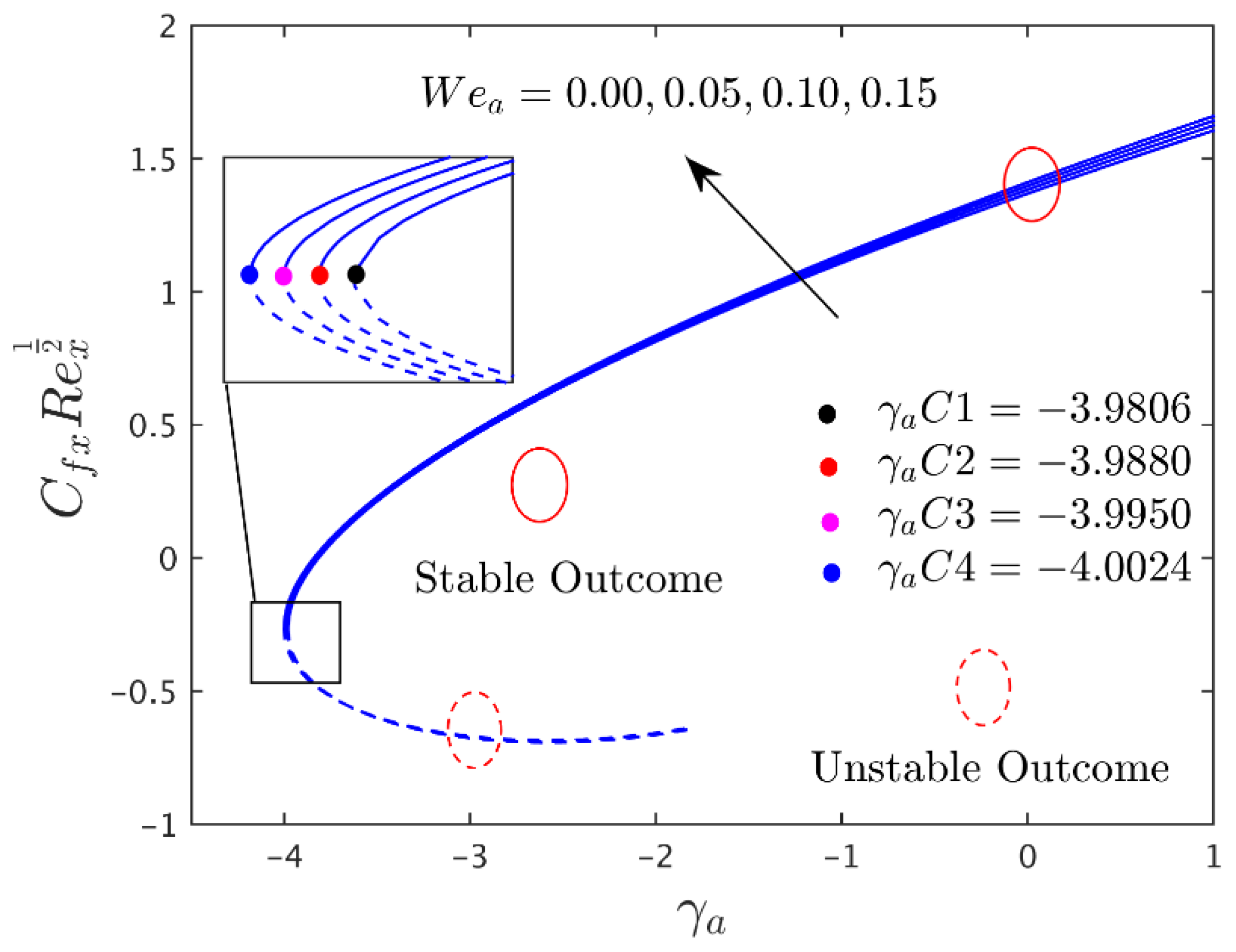 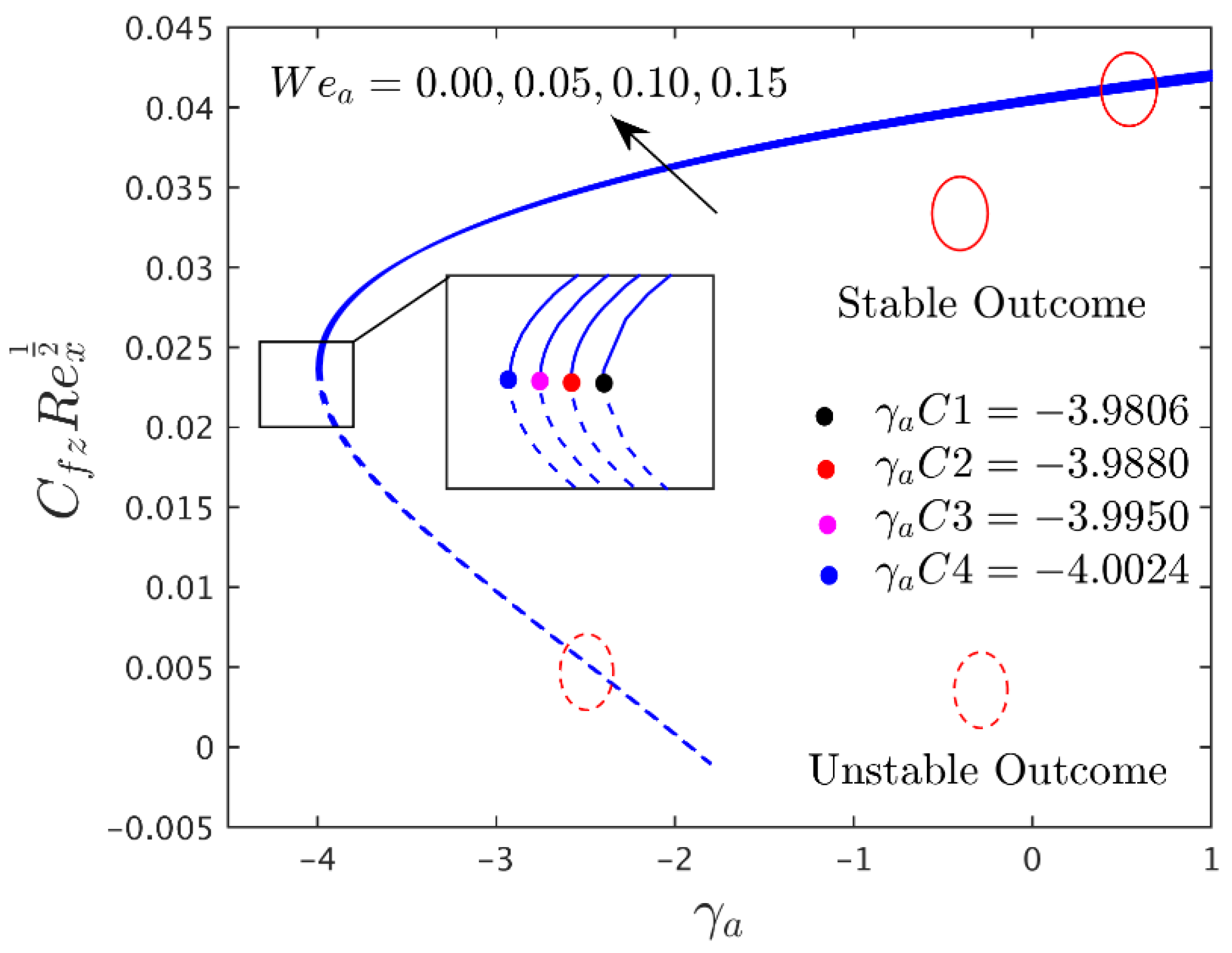 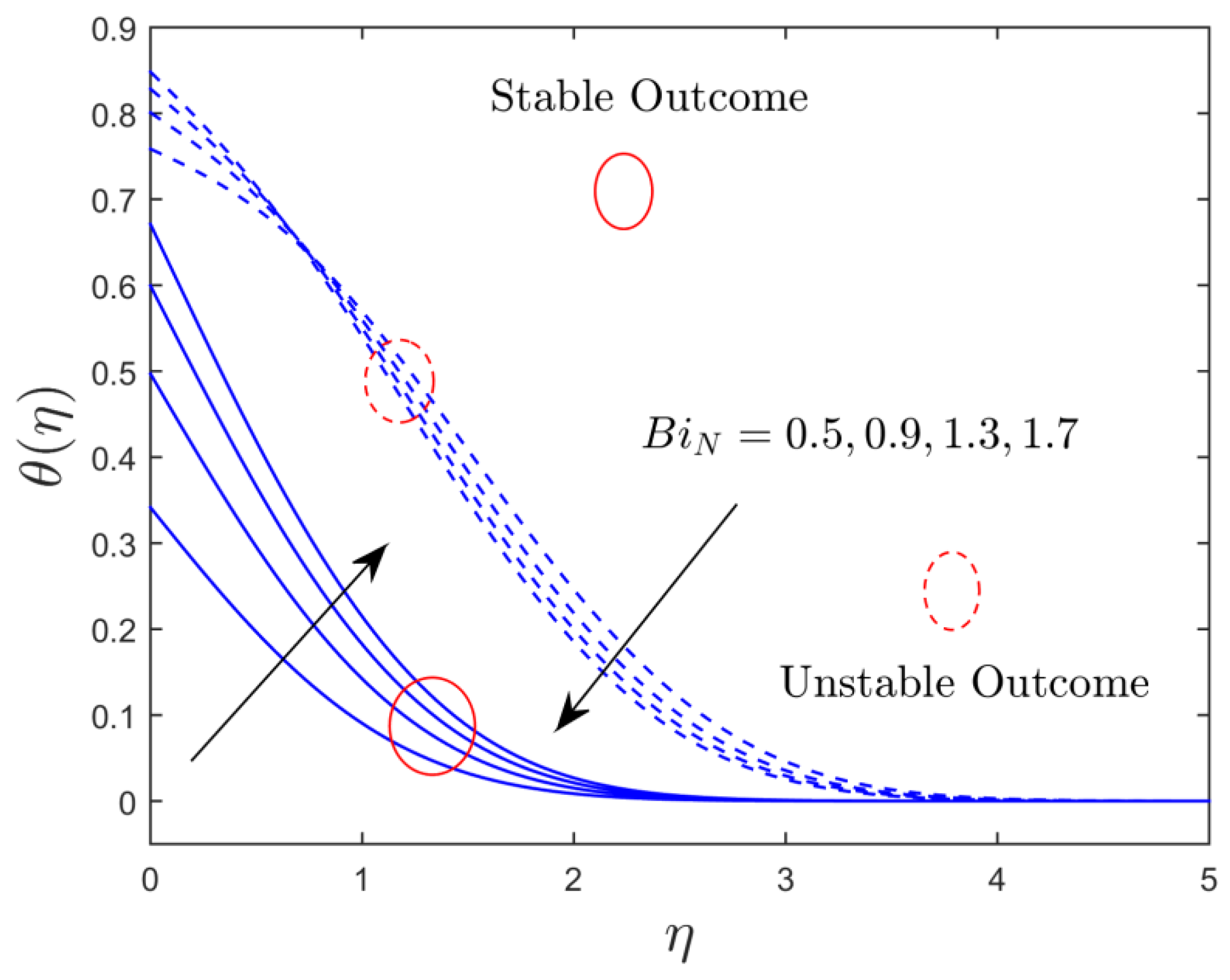 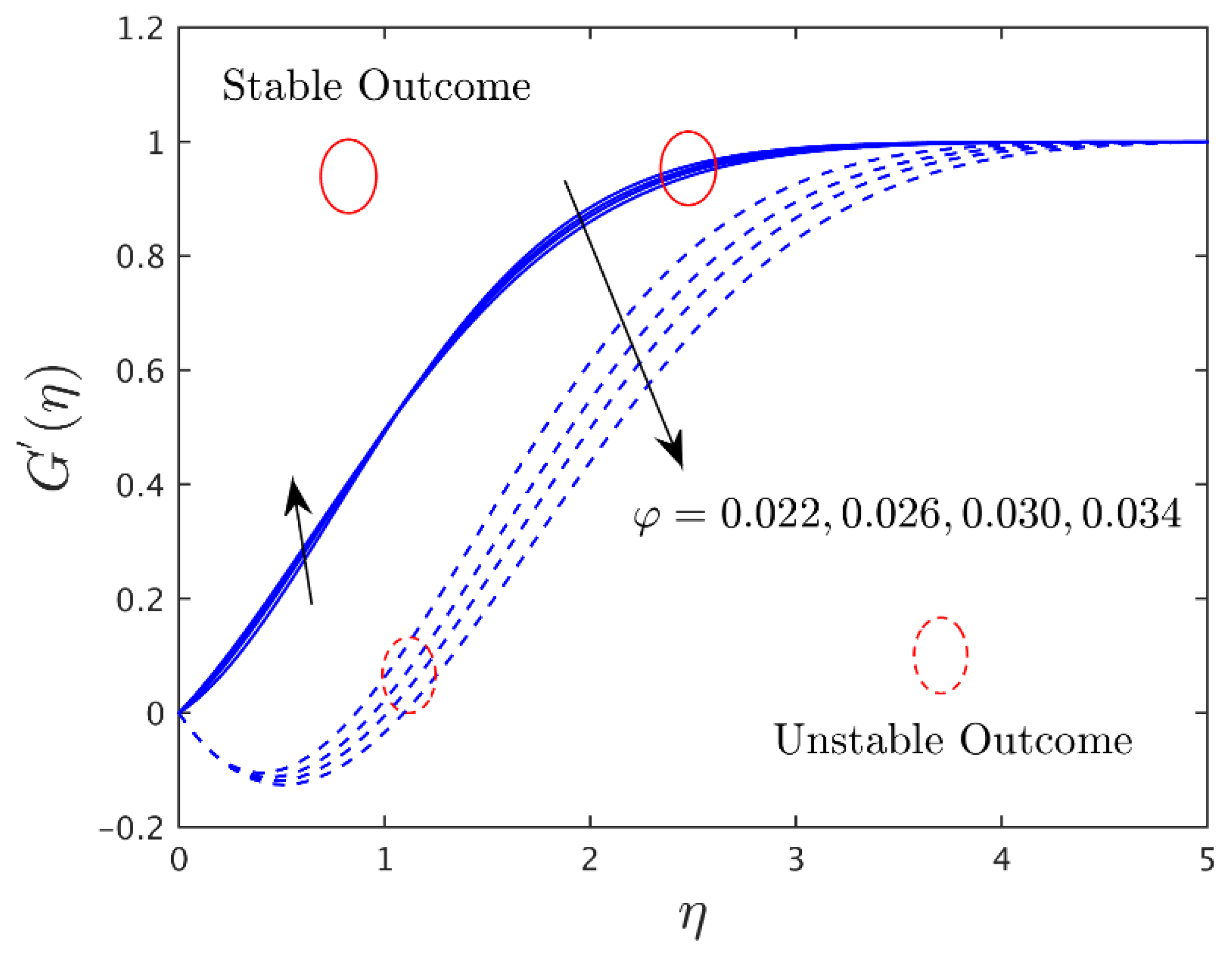 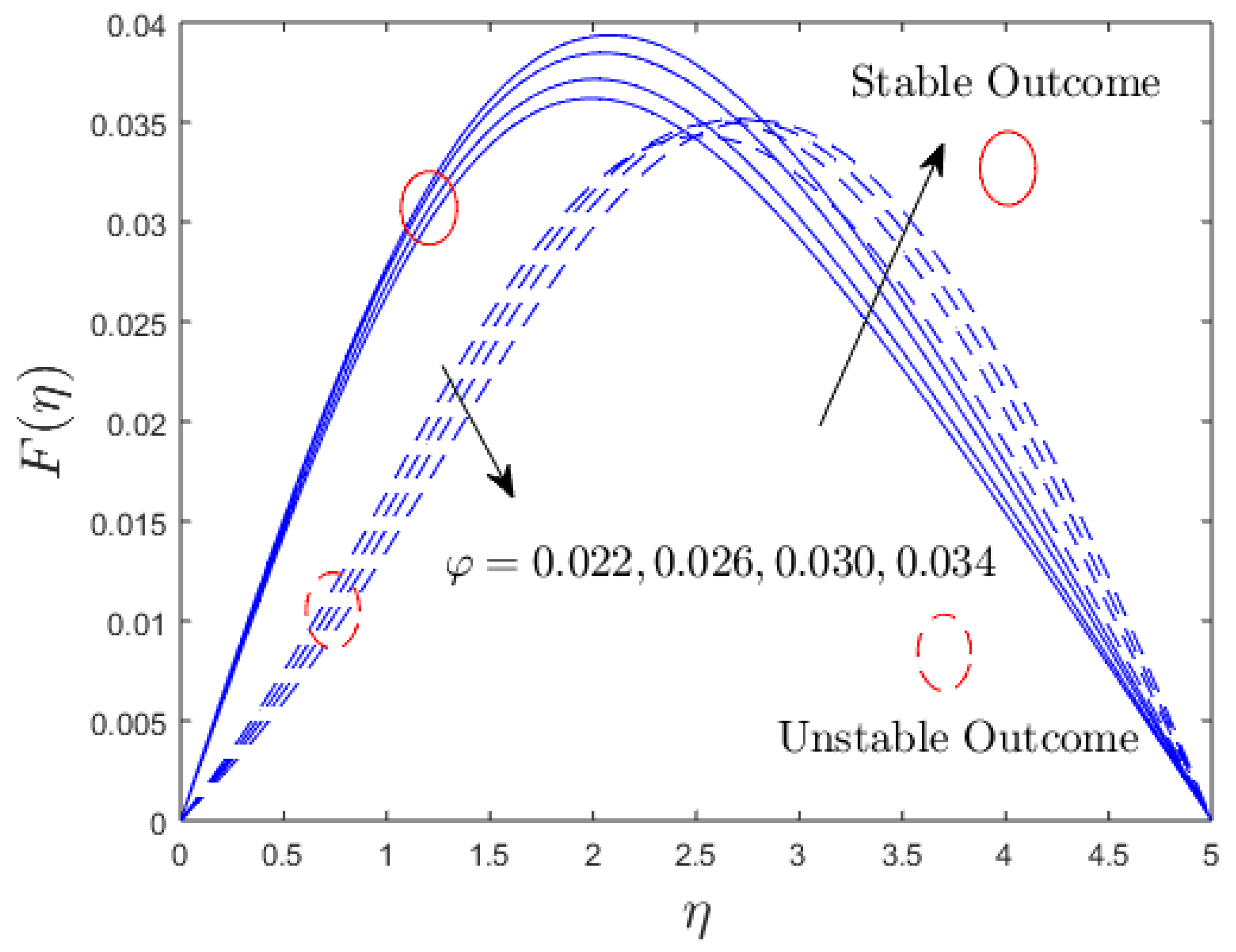 Khan, U.; Zaib, A.; Ishak, A.; Waini, I.; M. Sherif, E.-S.; Boonsatit, N.; Pop, I.; Jirawattanapanit, A. Ramification of Hall and Mixed Convective Radiative Flow towards a Stagnation Point into the Motion of Water Conveying Alumina Nanoparticles Past a Flat Vertical Plate with a Convective Boundary Condition: The Case of Non-Newtonian Williamson Fluid. Lubricants 2022, 10, 192. https://doi.org/10.3390/lubricants10080192


Khan U, Zaib A, Ishak A, Waini I, M. Sherif E-S, Boonsatit N, Pop I, Jirawattanapanit A. Ramification of Hall and Mixed Convective Radiative Flow towards a Stagnation Point into the Motion of Water Conveying Alumina Nanoparticles Past a Flat Vertical Plate with a Convective Boundary Condition: The Case of Non-Newtonian Williamson Fluid. Lubricants. 2022; 10(8):192. https://doi.org/10.3390/lubricants10080192

Khan, U.; Zaib, A.; Ishak, A.; Waini, I.; M. Sherif, E.-S.; Boonsatit, N.; Pop, I.; Jirawattanapanit, A. Ramification of Hall and Mixed Convective Radiative Flow towards a Stagnation Point into the Motion of Water Conveying Alumina Nanoparticles Past a Flat Vertical Plate with a Convective Boundary Condition: The Case of Non-Newtonian Williamson Fluid. Lubricants 2022, 10, 192. https://doi.org/10.3390/lubricants10080192


Khan U, Zaib A, Ishak A, Waini I, M. Sherif E-S, Boonsatit N, Pop I, Jirawattanapanit A. Ramification of Hall and Mixed Convective Radiative Flow towards a Stagnation Point into the Motion of Water Conveying Alumina Nanoparticles Past a Flat Vertical Plate with a Convective Boundary Condition: The Case of Non-Newtonian Williamson Fluid. Lubricants. 2022; 10(8):192. https://doi.org/10.3390/lubricants10080192