30 Years of Multifrequency Quasar Variability: A Personal Journey
Next Article in Special Issue

The prompt emission of most gamma-ray bursts (GRBs) typically exhibits a non-thermal Band component. The synchrotron radiation in the popular internal shock model is generally put forward to explain such a non-thermal component. However, the low-energy photon index predicted by the synchrotron radiation is inconsistent with the observed value . Here, we investigate the evolution of a magnetic field during propagation of internal shocks within an ultrarelativistic outflow, and revisit the fast cooling of shock-accelerated electrons via synchrotron radiation for this evolutional magnetic field. We find that the magnetic field is first nearly constant and then decays as , which leads to a reasonable range of the low-energy photon index, . In addition, if a rising electron injection rate during a GRB is introduced, we find that reaches more easily. We thus fit the prompt emission spectra of GRB 080916c and GRB 080825c.
Keywords: gamma rays bursts; radiation mechanisms; non-thermal gamma rays bursts; radiation mechanisms; non-thermal

The prompt radiation mechanism of gamma-ray bursts (GRBs) is still being debated, even though the prompt spectra can usually be fitted well by the Band function [1], which suggests a smoothly jointed broken power law with the low-energy photon index , the high energy photon index and the peak energy [2,3]. Currently, neither the possible one-temperature thermal emission from an ultrarelativistic fireball, nor the single synchrotron radiation from shock-accelerated electrons within this fireball, provide an explanation for such a low-energy photon index (see [4,5] for a review).
Generally, there are two mechanisms that explain the low energy photon index of the GRB prompt emission. The first mechanism is the Comptonized quasi-thermal emission from the photosphere of an ultrarelativistic outflow [6,7,8,9,10,11,12,13,14,15,16,17,18,19,20]. The second mechanism is synchrotron and/or synchrotron self-Compton (SSC) emission in the optically thin region. For fast-cooling synchrotron radiation in the internal shock model, possible solutions include invoking a small-scale rapidly decaying magnetic field [21], a decaying magnetic field with a power-law index in a relativistically-expanding outflow [22,23,24], a decaying magnetic field in a post-shock region [25], Klein–Nishina (KN) cooling [26,27], an adjustable synchrotron self-absorption frequency [28,29], or the acceleration process [30] and other evolutional model parameters [31]. Alternatively, slow cooling was introduced to understand the low-energy photon index [32]. In addition to the internal shock model, the other energy dissipation mechanisms, such as the ICMART model [33], were proposed to solve the low-energy spectral index issue. In some models (e.g., [34]), the observed prompt emission of GRBs is understood to be dominated by the SSC emission, while the synchrotron radiation is in much lower energy bands.
The fast cooling synchrotron radiation in the internal shock model is generally considered to be a straightforward and leading mechanism to explain the GRB prompt emission spectra, and the most important issue in this model is to explain the low-energy spectral index. An underlying assumption in the traditional synchrotron internal shock model is to calculate the electron cooling without considering the evolution of the magnetic field. In other words, the magnetic field is treated as a constant and its effect in the continuity equation of electrons is usually ignored (e.g., [35]). In the fast cooling case, the predicted low-energy photon index is much softer than observed. In this paper, we try to alleviate this problem. We calculate the magnetic field in the realistic internal shock model during a collision of two relativistic thick shells and obtain an evolutional form of the magnetic field, constant before the time that is nearly equal to the ejection time interval of the two shells, and after the time . We consider the cooling of electrons accelerated by internal shocks for this evolutional magnetic field, and find the resulting spectral index for constant and for , by adopting a cooling method similar to that in Ref. [22]. Actually, these two cases may coexist, and the outflow may undergo the first case and then the second case, so theoretically the actual index will range from to . Furthermore, below the peak energy there is a gradual process, so that is only close to . In addition, we consider a rising electron injection rate, leading to a larger , slightly smaller than .
This paper is organized as follows. We calculate the dynamics of a collision between two thick shells in Section 2. In Section 3, we investigate the electron cooling and its synchrotron radiation with an evolutional magnetic field and a rising electron injection rate. In the final section, discussions and conclusions are given.

In the popular internal shock model, an ultrarelativistic fireball consisting of a series of shells with different Lorentz factors can produce prompt emission through collisions among these shells. For the dynamics of two-shell collision, we adopt the same approach as the one in [36]. In order to present one GRB prompt emission component (with duration ∼ few seconds), we here consider two thick shell–shell collision to produce a consistent GRB pulse with a duration of few seconds (i.e., the slow pulse) and the fast pulses with a duration of in GRBs may be caused by the density fluctuation of the shell. Under this assumption, a prior slow thick shell A with bulk lorentz factor and kinetic luminosity , and a posterior fast thick shell B with bulk lorentz factor (where ) and kinetic luminosity is adopted. The collision of the two shells begins at radius [36] where is the time interval between the two thick shells, and is a redefined time interval. For , . The conventional expression is used. During the collision, there are four regions separated by internal forward-reverse shocks: (1) the unshocked shell A; (2) the shocked shell A; (3) the shocked shell B; and (4) the unshocked shell B, where regions 2 and 3 are separated by a contact discontinuity.
The particle number density of a shell measured in its comoving frame can be calculated as [37]: where R is the radius of the shell and subscript i can be taken as A or B. As in the literature [36,37,38,39,40], we derive the dynamics of internal forward-reverse shocks. In order to get a high prompt emission luminosity, it is reasonable to assume and . Assuming that , , , and are Lorentz factors of regions 1, 2, 3 and 4 respectively, we have , , and . If a fast shell with low particle number density catches up with a slow shell with high particle number density and then they collide with each other, a Newtonian forward shock (NFS) and a relativistic reverse shock (RRS) may be generated [36,37]. So we can obtain . Then, according to the jump conditions between the two sides of a shock [41], the comoving internal energy densities of the two shocked regions can be calculated following and , where and are the Lorentz factors of region 2 relative to the unshocked region 1, and region 3 relative to region 4, respectively. It is required that because of the mechanical equilibrium. We have [36,37]
Two relative Lorentz factors can be calculated as , and . Assuming that t is the observed shell–shell interaction time since the prompt flare onset, the radius of the system during the collision can be written as
During the propagation of the shocks and before the shock crossing time, the instantaneous electron injection numbers (in ) in regions 2 and 3 can be calculated as follows [38]: and respectively.

3. Synchrotron Radiation with a Decaying Magnetic Field and a Variable Electron Injection Rate

3.2. The Effect of the Variable Electron Injection Rate

4. Application to the Actual GRB Spectra

We thank the anonymous referees for the helpful suggestions and comments. 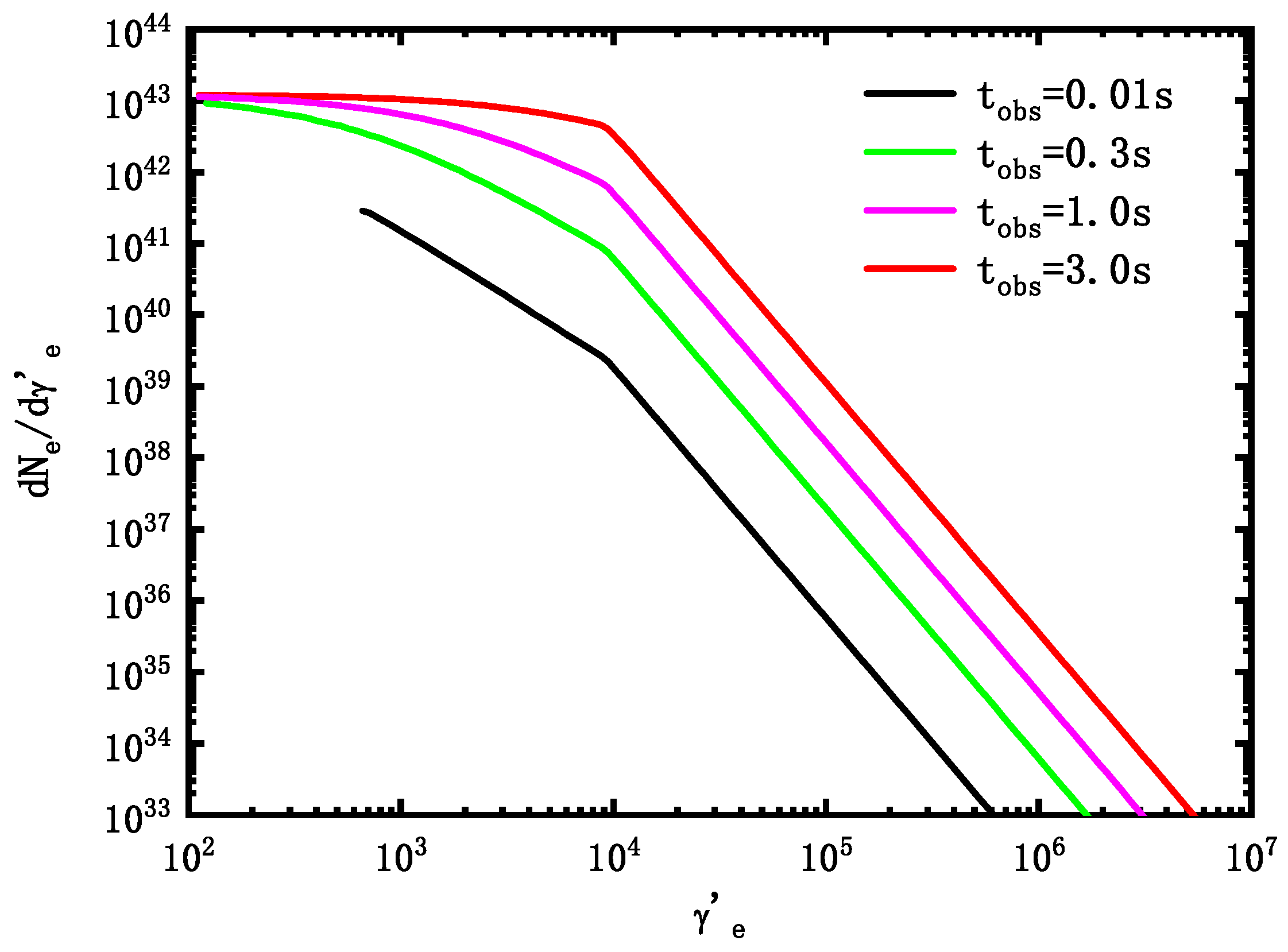 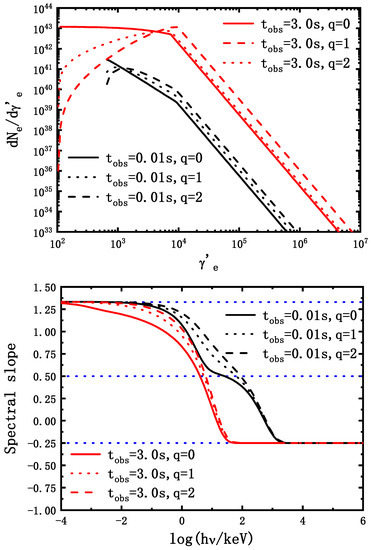 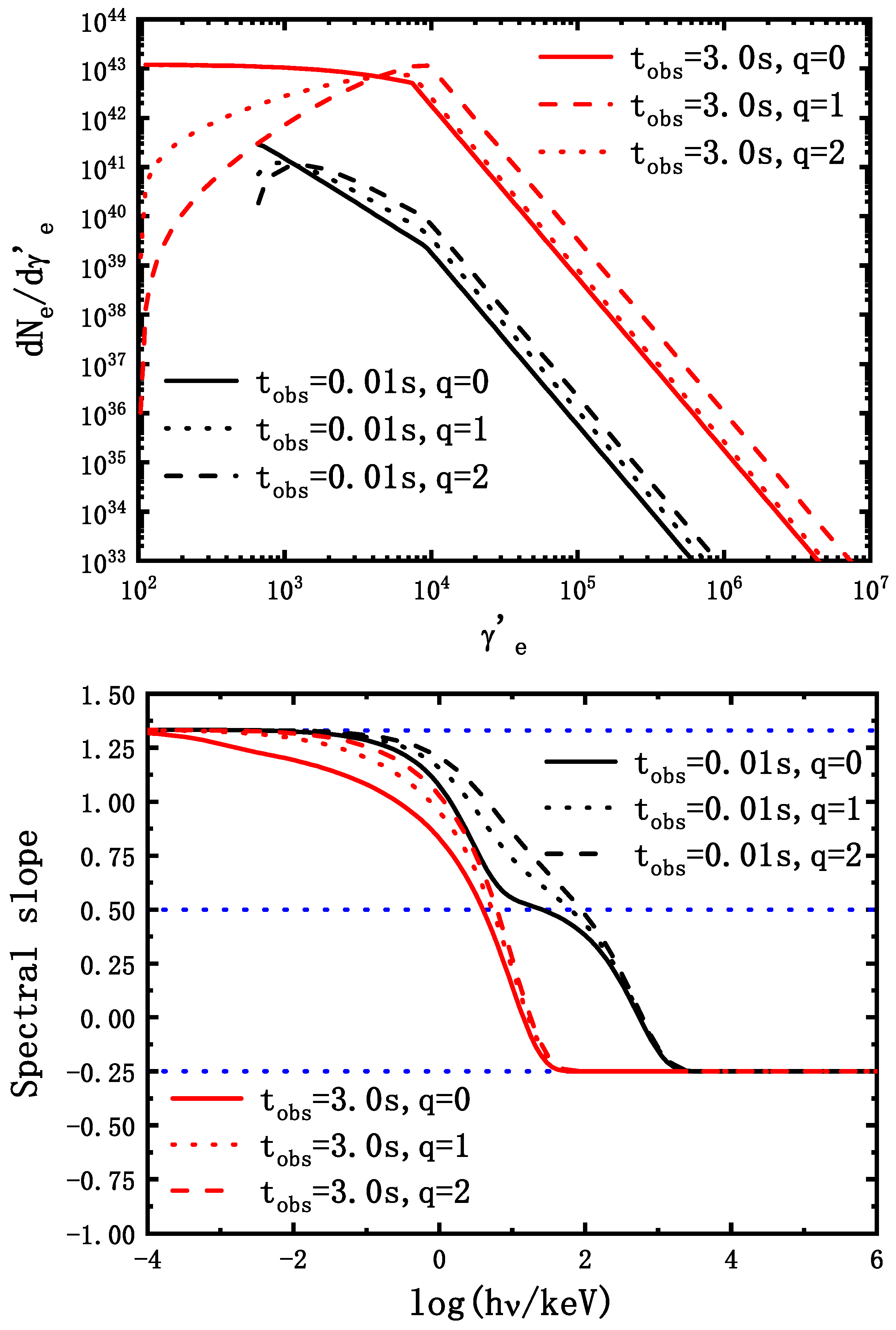 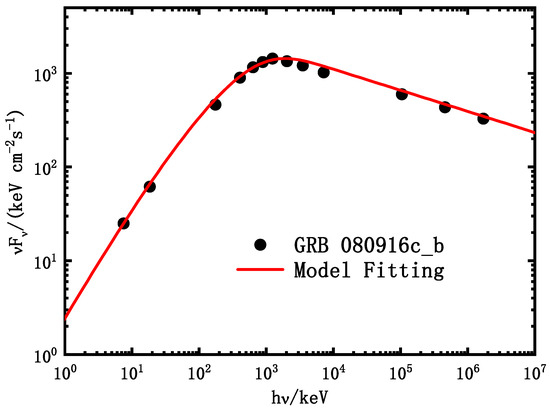 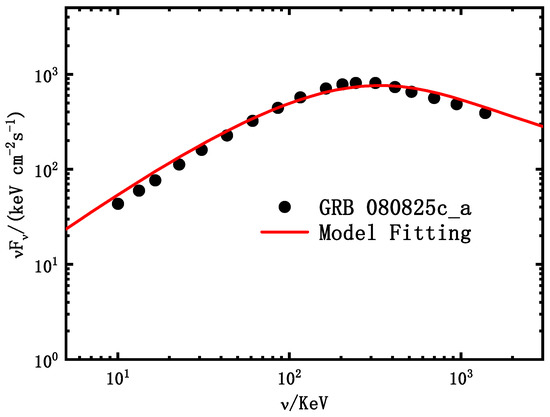