Exoplanets: Past, Present, and Future
Next Article in Special Issue

SPHiNX is a proposed satellite-borne gamma-ray burst polarimeter operating in the energy range 50–500 keV. The mission aims to probe the fundamental mechanism responsible for gamma-ray burst prompt emission through polarisation measurements. Optimising the signal-to-background ratio for SPHiNX is an important task during the design phase. The Geant4 Monte Carlo toolkit is used in this work. From the simulation, the total background outside the South Atlantic Anomaly (SAA) is about 323 counts/s, which is dominated by the cosmic X-ray background and albedo gamma rays, which contribute ∼60% and ∼35% of the total background, respectively. The background from albedo neutrons and primary and secondary cosmic rays is negligible. The delayed background induced by the SAA-trapped protons is about 190 counts/s when SPHiNX operates in orbit for one year. The resulting total background level of ∼513 counts/s allows the polarisation of ∼50 GRBs with minimum detectable polarisation less than 30% to be determined during the two-year mission lifetime. View Full-Text
Keywords: polarimeter; Compton scattering; GRB; background polarimeter; Compton scattering; GRB; background
►▼ Show Figures 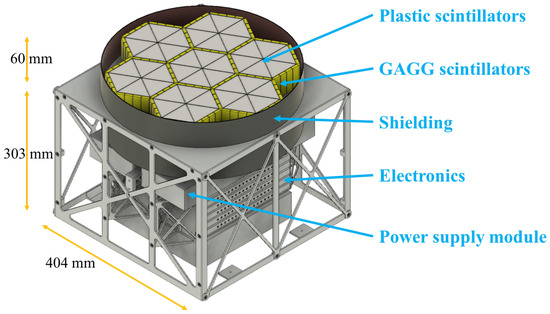