Effelsberg Monitoring of a Sample of RadioAstron Blazars: Analysis of Intra-Day Variability

We present the first results of an ongoing intra-day variability (IDV) flux density monitoring program of 107 blazars, which were selected from a sample of RadioAstron space very long baseline interferometry (VLBI) targets. The IDV observations were performed with the Effelsberg 100-m radio telescope at 4.8 GHz, focusing on the statistical properties of IDV in a relatively large sample of compact active galactic nuclei (AGN). We investigated the dependence of rapid (<3 day) variability on various source properties through a likelihood approach. We found that the IDV amplitude depends on flux density and that fainter sources vary by about a factor of 3 more than their brighter counterparts. We also found a significant difference in the variability amplitude between inverted- and flat-spectrum radio sources, with the former exhibiting stronger variations. -ray loud sources were found to vary by up to a factor 4 more than -ray quiet ones, with 4 significance. However a galactic latitude dependence was barely observed, which suggests that it is predominantly the intrinsic properties (e.g., angular size, core-dominance) of the blazars that determine how they scintillate, rather than the directional dependence in the interstellar medium (ISM). We showed that the uncertainty in the VLBI brightness temperatures obtained from the space VLBI data of the RadioAstron satellite can be as high as ~70% due to the presence of the rapid flux density variations. Our statistical results support the view that IDV at centimeter wavelengths is predominantly caused by interstellar scintillation (ISS) of the emission from the most compact, core-dominant region in an AGN. View Full-Text
Keywords: galaxies; active-method; statistical-radio continuum; ISM galaxies; active-method; statistical-radio continuum; ISM
►▼ Show Figures 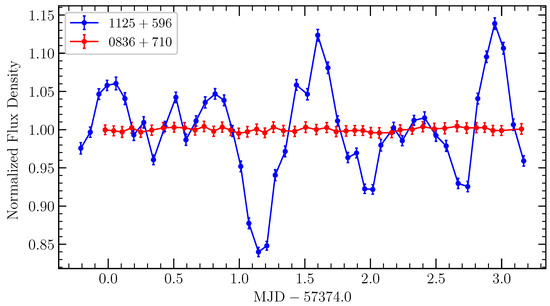