Drug metabolic enzymes and transporters are responsible for an important variability in drug disposition. The cocktail approach is a sound strategy for the simultaneous evaluation of several enzyme and transporter activities for a personalized dosage of medications. Recently, we have demonstrated the reliability of the Geneva cocktail, combining the use of dried blood spots (DBS) and reduced dose of phenotyping drugs for the evaluation of the activity of six cytochromes and P-glycoprotein (P-gp). As part of a study evaluating potential drug–drug interactions between probe drugs of the Geneva cocktail, the present paper focuses on the impact of cytochromes (CYP) probe drugs on the disposition of fexofenadine, a P-gp test drug. In a randomized four-way Latin-square crossover study, 30 healthy volunteers (15 men and 15 women) received caffeine 50 mg, bupropion 20 mg, flurbiprofen 10 mg, omeprazole 10 mg, dextromethorphan 10 mg, midazolam 1 mg, and fexofenadine 25 mg alone (or as part of a previously validated combination) and all together (Geneva cocktail). The determination of drug concentrations was performed in DBS samples and pharmacokinetic parameters were calculated. Fexofenadine AUC0–8 h and Cmax decreased by 43% (geometric mean ratio: 0.57; CI 90: 0.50–0.65; p < 0.001) and 49% (geometric mean ratio: 0.51; CI 90: 0.44–0.59; p < 0.001), respectively, when fexofenadine was administered as part of the Geneva cocktail in comparison to fexofenadine alone. Consequently, the apparent oral clearance (Cl/F) increased 1.7-fold (CI 90: 1.49–1.93; p < 0.001). There was no interaction between the remaining probes. In conclusion, an unexpected interaction occurred between fexofenadine and one or several of the following substances: caffeine, bupropion, flurbiprofen, omeprazole, dextromethorphan, and midazolam. Further studies are necessary to elucidate the mechanism of this interaction. View Full-Text
Keywords: precision medicine; P-glycoprotein; phenotyping; cocktail precision medicine; P-glycoprotein; phenotyping; cocktail
►▼ Show Figures 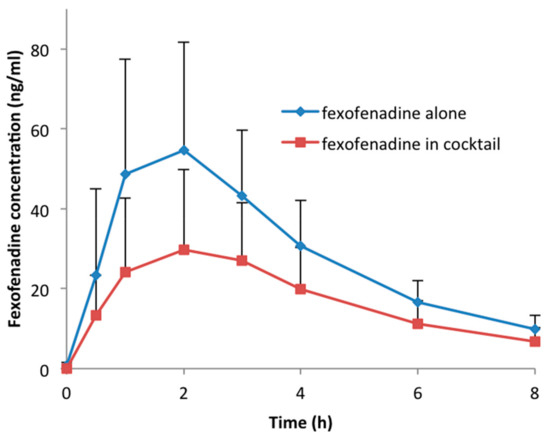