In this paper, we report a clinically proven case of Parkinson’s disease (PD) with early onset in a patient who is a heterozygous mutation carrier of ATP7B (the Wilson’s disease gene). The patient was observed from 2011 to 2018 in the Center for Neurodegenerative Diseases, Institute of Experimental Medicine (St. Petersburg, Russia). During this period, the patient displayed aggravation of PD clinical symptoms that were accompanied by a decrease in the ceruloplasmin concentration (from 0.33 to 0.27 g/L) and an increase in serum nonceruloplasmin copper, which are typical of the late stages of Wilson’s disease. It was found that one of the alleles of exon 14 in the ATP7B gene, which partially codes of the nucleotide-binding domain (N-domain), carries a mutation not previously reported corresponding to Cys1079Gly substitution. Alignment of the ATP7B N-domain amino acid sequences of representative vertebrate species has shown that the Cys at 1079 position is conserved throughout the evolution. Molecular dynamic analysis of a polypeptide with Cys1079Gly substitution showed that the mutation causes profound conformational changes in the N-domain, which could potentially lead to impairment of its functions. The role of ATP7B gene mutations in PD development is discussed. View Full-Text
Keywords: Parkinson’s disease; Wilson’s disease; copper-status index; N-domain of ATP7B; molecular modeling Parkinson’s disease; Wilson’s disease; copper-status index; N-domain of ATP7B; molecular modeling
►▼ Show Figures 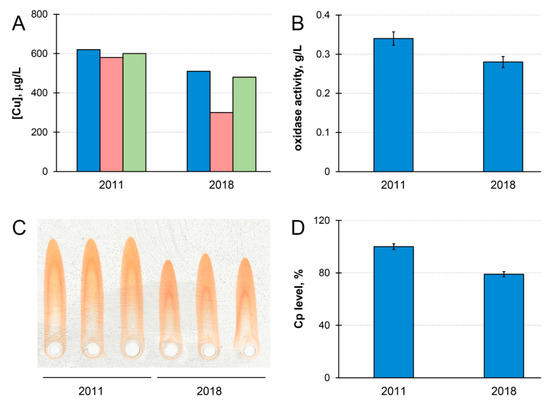