The Experience of Caregivers Living with Cancer Patients: A Systematic Review and Meta-Synthesis

Sex, Race, and Age Differences in Observed Years of Life, Healthy Life, and Able Life among Older Adults in The Cardiovascular Health Study

Objective: Longevity fails to account for health and functional status during aging. We sought to quantify differences in years of total life, years of healthy life, and years of able life among groups defined by age, sex, and race. Design: Primary analysis of a cohort study. Setting: 18 years of annual evaluations in four U.S. communities. Participants: 5888 men and women aged 65 and older. Measurements: Years of life were calculated as the time from enrollment to death or 18 years. Years of total, healthy, and able life were determined from self-report during annual or semi-annual contacts. Cumulative years were summed across each of the age and sex groups. Results: White women had the best outcomes for all three measures, followed by white men, non-white women, and non-white men. For example, at the mean age of 73, a white female participant could expect 12.9 years of life, 8.9 of healthy life and 9.5 of able life, while a non-white female could expect 12.6, 7.0, and 8.0 years, respectively. A white male could expect 11.2, 8.1, and 8.9 years of life, healthy life, and able life, and a non-white male 10.3, 6.2, and 7.9 years. Regardless of starting age, individuals of the same race and sex groups spent similar amounts (not proportions) of time in an unhealthy or unable state. Conclusion: Gender had a greater effect on longevity than did race, but race had a greater effect on years spent healthy or able. The mean number of years spent in an unable or sick state was surprisingly independent of the lifespan. View Full-Text
Keywords: able life; active life; healthy life; longevity; ADL able life; active life; healthy life; longevity; ADL
►▼ Show Figures 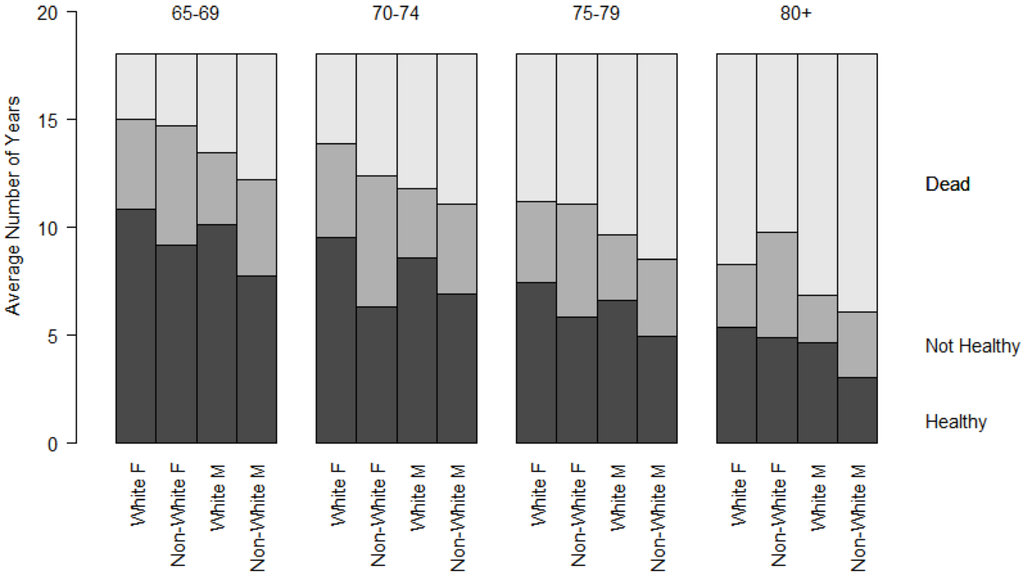