Multi-Omics Analysis of SOX4, SOX11, and SOX12 Expression and the Associated Pathways in Human Cancers
Previous Article in Journal

The Prognostic Role of Micro-RNAs in Head and Neck Cancers: An Umbrella Review

Intensity modulated proton therapy (IMPT) with the vertebral artery (VA)-sparing technique has been initially proposed in our institution. This pilot study was conducted to compare the dose to VAs between IMPT and volumetric-modulated arc therapy (VMAT) for patients with nasopharyngeal carcinoma (NPC). A total of six patients with NPC treated by IMPT were enrolled in the study. Target volumes and organs at risk (OARs) were delineated, including 12 samples of right and left VAs, respectively, for each patient. Treatment planning by IMPT and dual-arc VMAT was carried out for comparison. The IMPT plan significantly reduced VA mean dose, V10, V20, V30, V40, and V50, compared to the VMAT plan in all 12 samples (p < 0.001). The average mean dose to VAs for IMPT was 35.2% (23.4–46.9%), which was less compared to VMAT (p < 0.001). Adequate dose coverage was achieved with both IMPT and VMAT plans for three different dose levels of target volumes for all patients. IMPT significantly reduces VA dose while maintaining adequate dose coverage of all target volumes. For patients with head and neck cancer who seek to preserve their blood flow to the brain in order to decrease late vascular and neurologic sequelae, IMPT should be considered. A prospective study with longer follow-up is ongoing to confirm our preliminary results.
Keywords: IMPT; proton therapy; vertebral artery; stroke; carotid artery stenosis; nasopharyngeal carcinoma IMPT; proton therapy; vertebral artery; stroke; carotid artery stenosis; nasopharyngeal carcinoma

Nasopharyngeal carcinoma (NPC) is highly prevalent in East Asia [1]. Radiotherapy (RT) is the mainstay treatment for NPC and has resulted in excellent disease control [2,3]. However, late vascular injuries caused by RT, such as carotid artery (CA) stenosis, vertebral artery (VA) stenosis, and ischemic stroke, have raised significant concerns about cancer survivorship [4,5,6,7,8,9,10]. CA and VA stenosis, for example, has an incidence rate reaching 30–40%, and the incidence increases continually with longer intervals after RT [9,10]. These late vascular and neurologic sequelae not only negatively affect the quality of life after treatment but also increase the healthcare expenditure for these long-term survivors. Refinement of the RT treatment to reduce these late sequelae and, meanwhile, maintain excellent disease control is the goal of the radiation oncologists.
Proton beam therapy (PBT), with its physics advantage of Bragg peaks, has the benefit of dose distribution for cancer treatment but the reimbursement policy regarding PBT varies among different areas of the world. Recent advances in the delivery of PBT by intensity modulated proton therapy (IMPT) have been reported, with significant reductions in the dose to oral cavity, brainstem, spinal cord, whole brain, mandible, larynx, and esophagus, and acute toxicities, such as mucositis requiring gastrostomy tube insertion, over photon therapy (XRT) [11,12,13]. However, none of the previous studies investigated whether IMPT could reduce the dose to blood vessels with the aim of decreasing late vascular injuries.
The circulation of the human brain is supplied by the CAs and VAs. Since CAs lie inside the target volumes of patients with NPC, which could not be spared during RT treatment, IMPT with a VA-sparing technique has been proposed in our institution in order to achieve the goal of preserving cerebral blood flow and avoiding late vascular sequelae. This study was conducted as the first report of our VA-sparing IMPT and here we present our results comparing the dose to VAs between IMPT and volumetric-modulated arc therapy (VMAT).

Under institutional review board approval, a total of 6 patients with non-distant metastatic NPC receiving IMPT at Kaohsiung Chang Gung Memorial Hospital were enrolled in this study. Patient charts were reviewed to determine patient characteristics and tumor characteristics. Their corresponding XRT plans were retrospectively generated using VMAT, the most advanced technique for XRT delivery, for comparison.

All patients underwent computed tomography (CT) simulation in the supine position with a 1.25 mm slice thickness and were immobilized with custom thermoplastic masks. Contrast-enhanced CT and magnetic resonance imaging with and without gadolinium enhancement performed in the treatment position were used for image registration with the CT.

The prescription doses were 69.96 Gy (RBE), 59.4 Gy (RBE), 52.8 Gy (RBE) at 2.12 Gy (RBE), 1.8 Gy (RBE), 1.6 Gy (RBE) per fraction to the high-risk, intermediate-risk, and low-risk target volumes, respectively, using the simultaneous integrated boost technique. The goals for target coverage and dose constraints to OARs were the same for IMPT and VMAT planning.

Treatment planning for IMPT and VMAT plans was carried out by RayStation (version 8.1, RaySearch Laboratories, Stockholm, Sweden). IMPT plans were created for full-field IMPT by using 3 fields from 3 different directions of scanning beams. Robust optimization was used to account for beam range uncertainties (±3.5%) and setup uncertainties (±3 mm). The treatment planning system simultaneously optimized the spot intensities from all fields, using an optimization algorithm with the objective of covering 99.5% of the corresponding CTVs with a 100% prescribed dose while minimizing dose to the adjacent OARs.
VMAT plans were designed using two full arcs. A 3 mm planning target volume (PTV) expansion was added to the three CTVs, respectively, for set-up uncertainties. The optimization objective covered 95% of the PTVs and 99.5% of the CTVs with a 100% prescribed dose. Both IMPT and VMAT plans were created by using identical dose–volume histogram objectives.
For VAs, there is currently no dose–volume consensus. The optimization goal that we proposed for our patients was a mean dose of 20 Gy (RBE) and V30 < 30% for both IMPT and VMAT. For comparisons of IMPT and VMAT, dose–volume parameters such as the mean dose, V10, V20, V30, V40, V50, V60, and V70 of VAs were generated by the treatment planning system. V10, for instance, represents the percentage of volume receiving 10 Gy (RBE) or more of doses.

Descriptive statistics were used to summarize patient data and tumor characteristics. The respective dose–volume histograms of the VAs of the 12 samples and three different levels of CTVs were exported from the treatment planning system for dose and volume analysis. The paired t-test was used to estimate the statistical significance of dose differences to VAs and target volumes between IMPT and VMAT. The Statistical Package for Social Sciences version 22.0 software (SPSS, Chicago, IL, USA) was used for statistical processing.

The IMPT plan significantly reduced VA mean dose, V10, V20, V30, V40, and V50, compared to the VMAT plan in all 12 samples. The mean dose to VAs was 31.6 Gy (RBE) for IMPT and 48.79 Gy (RBE) for VMAT (p < 0.001). Though most of the VAs could not achieve the optimization goal that we proposed, the mean dose to VAs by IMPT was 35.2% less compared to VMAT. The comparisons of V10, V20, V30, V40, V50, V60, and V70, between IMPT and VMAT, are demonstrated in Figure 1. Table 2 depicts the detailed differences in doses to VAs between IMPT and VMAT.
Figure 2 shows the representative axial CT images of colorwash dose distributions for IMPT and VMAT plans of the same patient.

VA-sparing IMPT significantly reduces VA dose compared to VMAT while maintaining adequate dose coverage of all target volumes. For patients with head and neck cancer who seek to preserve the blood flow of the brain in order to decrease late vascular and neurologic sequelae, IMPT should be considered. In our institution, a prospective study with long-term follow-up is ongoing to confirm the benefit.

The authors declare no potential conflicts of interest and no financial support or funding was given.

The study was conducted according to the guidelines of the Declaration of Helsinki and approved by the Institutional Review Board (or Ethics Committee) of Chang Gung Medical Foundation (202002194B0).

Written informed consent of the patients or their families was waived for this kind of retrospective study by the Chang Gung Medical Foundation Institutional Review Board.

The data presented in this study are available upon request from the corresponding author. The data are not publicly available due to ethical restrictions. 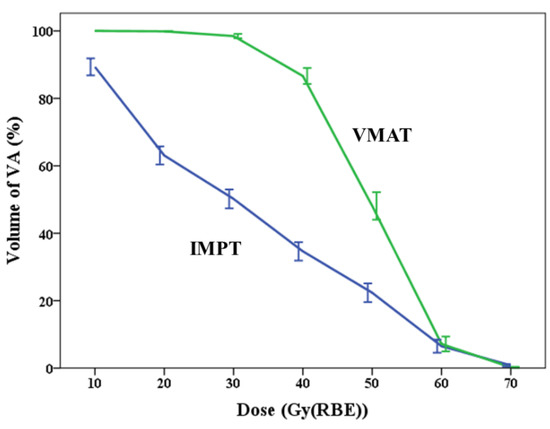 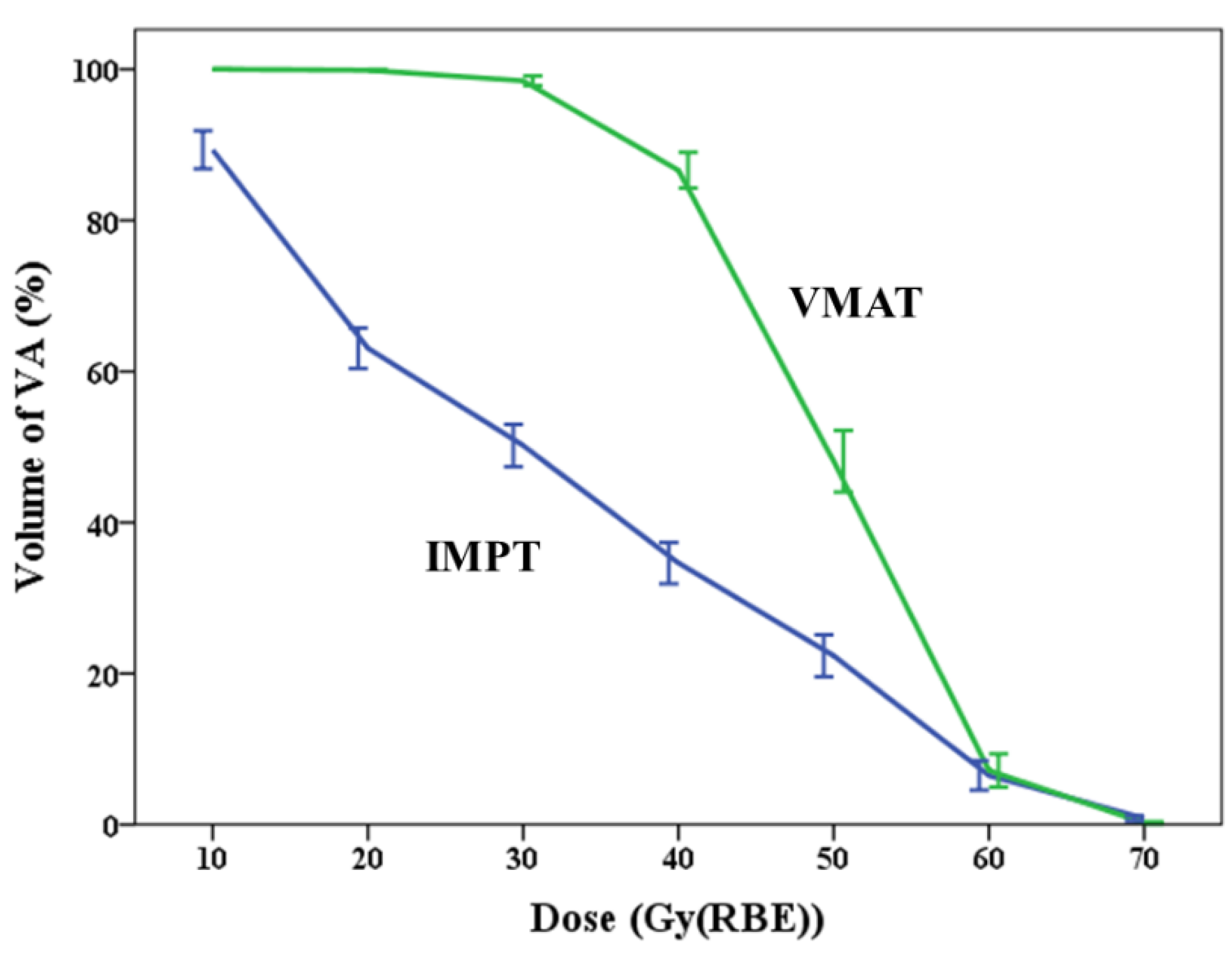