A 33-mRNA Classifier Is Able to Produce Inflammopathic, Adaptive, and Coagulopathic Endotypes with Prognostic Significance: The Outcomes of Metabolic Resuscitation Using Ascorbic Acid, Thiamine, and Glucocorticoids in the Early Treatment of Sepsis (ORANGES) Trial

Background: Retrospective analysis of the transcriptomic host response in sepsis has demonstrated that sepsis can be separated into three endotypes—inflammatory (IE), adaptive (AE), and coagulopathic (CE), which have demonstrated prognostic significance. We undertook a prospective transcriptomic host response analysis in a subgroup of patients enrolled in the Outcomes of Metabolic Resuscitation Using Ascorbic Acid, Thiamine, and Glucocorticoids in the Early Treatment of Sepsis (ORANGES) trial. Methods: Blood was obtained from 51 patients and profiled using a pre-established 33-mRNA classifier to determine sepsis endotypes. Endotypes were compared to therapy subgroups and clinical outcomes. Results: We redemonstrated a statistically significant difference in mortality between IE, AE, and CE patients, with CE patients demonstrating the highest mortality (40%), and AE patients the lowest mortality (5%, p = 0.032). A higher CE score was a predictor of mortality; coronary artery disease (CAD) and elevated CE scores were associated with an increase in mortality (CAD: HR = 12.3, 95% CI 1.5–101; CE score: HR = 15.5 95% CI 1.15–211). Kaplan–Meier (KM) analysis of the entire cohort (n = 51) demonstrated a decrease survival in the CE group, p = 0.026. KM survival analysis of hydrocortisone, ascorbic acid, and thiamine (HAT) therapy and control patients not receiving steroids (n = 45) showed CE and IE was associated with a decrease in survival (p = 0.003); of interest, there was no difference in survival in CE patients after stratifying by HAT therapy (p = 0.18). These findings suggest a possible treatment effect of corticosteroids, HAT therapy, endotype, and outcome. Conclusion: This subset of patients from the ORANGES trial confirmed previous retrospective findings that a 33-mRNA classifier can group patients into IE, AE, and CE endotypes having prognostic significance. A novel finding of this study identifying an association between endotype and corticosteroid therapy warrants further study in support of future diagnostic use of the endotyping classifier. View Full-Text
Keywords: sepsis; septic shock; HAT therapy; vitamin c; endotyping; coagulopathic; hydrocortisone; thiamine; ascorbic acid sepsis; septic shock; HAT therapy; vitamin c; endotyping; coagulopathic; hydrocortisone; thiamine; ascorbic acid
►▼ Show Figures 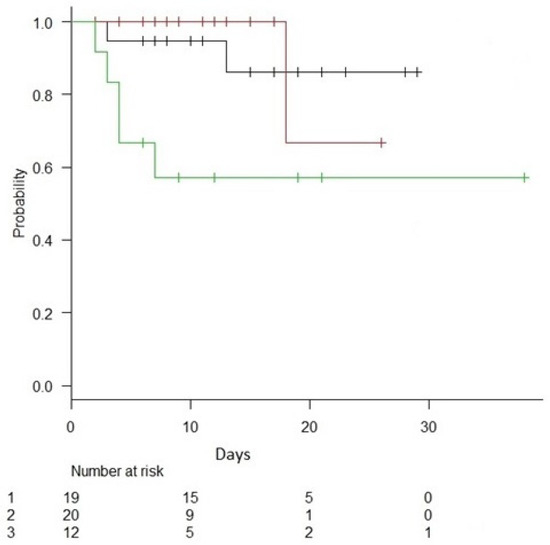