Personalized Dentistry: Approaching a New Way for Diagnosis and Treatment of Oral Diseases
Next Article in Special Issue

SPIDER as A Rehabilitation Tool for Patients with Neurological Disabilities: The Preliminary Research
Previous Article in Special Issue

Neurophysiological Hallmarks of Neurodegenerative Cognitive Decline: The Study of Brain Connectivity as A Biomarker of Early Dementia

Neurodegenerative processes of various types of dementia start years before symptoms, but the presence of a “neural reserve”, which continuously feeds and supports neuroplastic mechanisms, helps the aging brain to preserve most of its functions within the “normality” frame. Mild cognitive impairment (MCI) is an intermediate stage between dementia and normal brain aging. About 50% of MCI subjects are already in a stage that is prodromal-to-dementia and during the following 3 to 5 years will develop clinically evident symptoms, while the other 50% remains at MCI or returns to normal. If the risk factors favoring degenerative mechanisms are modified during early stages (i.e., in the prodromal), the degenerative process and the loss of abilities in daily living activities will be delayed. It is therefore extremely important to have biomarkers able to identify—in association with neuropsychological tests—prodromal-to-dementia MCI subjects as early as possible. MCI is a large (i.e., several million in EU) and substantially healthy population; therefore, biomarkers should be financially affordable, largely available and non-invasive, but still accurate in their diagnostic prediction. Neurodegeneration initially affects synaptic transmission and brain connectivity; methods exploring them would represent a 1st line screening. Neurophysiological techniques able to evaluate mechanisms of synaptic function and brain connectivity are attracting general interest and are described here. Results are quite encouraging and suggest that by the application of artificial intelligence (i.e., learning-machine), neurophysiological techniques represent valid biomarkers for screening campaigns of the MCI population. View Full-Text
Keywords: Alzheimer's disease; mild cognitive impairment; EEG; TMS Alzheimer's disease; mild cognitive impairment; EEG; TMS
►▼ Show Figures 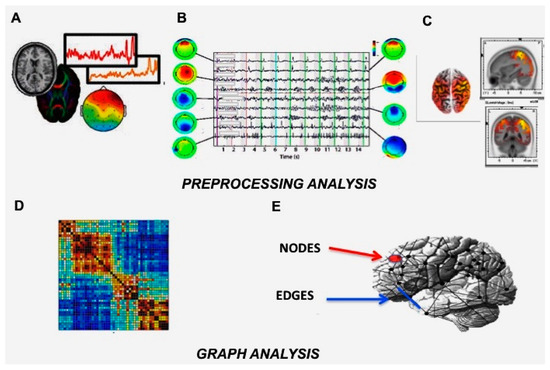