Myalgic Encephalomyelitis (ME) or What? An Operational Definition

Cardiovascular diseases (CVDs) have become the biggest threat to human health, and they are accelerated by hypertension. The best way to avoid the many complications of CVDs is to manage and prevent hypertension at an early stage. However, there are no symptoms at all for most types of hypertension, especially for prehypertension. The awareness and control rates of hypertension are extremely low. In this study, a novel hypertension management method based on arterial wave propagation theory and photoplethysmography (PPG) morphological theory was researched to explore the physiological changes in different blood pressure (BP) levels. Pulse Arrival Time (PAT) and photoplethysmogram (PPG) features were extracted from electrocardiogram (ECG) and PPG signals to represent the arterial wave propagation theory and PPG morphological theory, respectively. Three feature sets, one containing PAT only, one containing PPG features only, and one containing both PAT and PPG features, were used to classify the different BP categories, defined as normotension, prehypertension, and hypertension. PPG features were shown to classify BP categories more accurately than PAT. Furthermore, PAT and PPG combined features improved the BP classification performance. The F1 scores to classify normotension versus prehypertension reached 84.34%, the scores for normotension versus hypertension reached 94.84%, and the scores for normotension plus prehypertension versus hypertension reached 88.49%. This indicates that the simultaneous collection of ECG and PPG signals could detect hypertension.
Keywords: pulse oximeter; blood pressure monitoring; pulse arrival time; global health; digital medicine; wearable devices pulse oximeter; blood pressure monitoring; pulse arrival time; global health; digital medicine; wearable devices

Hypertension is a major factor of many cardiovascular diseases (CVDs), which are a group of disorders of the heart and blood vessels, including coronary heart disease, cerebrovascular disease, peripheral arterial disease, rheumatic heart disease, etc. [1]. Although sometimes there are symptoms of headache, lack of breath, chest pain, and so on, for most people with hypertension, there are no symptoms at all. Therefore, it is also known as the “silent killer”, and 13% of global death is attributed to it [1]. With each heartbeat, blood is pumped via the contraction of the heart and flows through the whole body following the arterial system. Blood pressure is formed by the main propulsion of the heart’s pumped blood and blockage of the microcirculatory system. Therefore, the higher is the blood pressure, the more difficult it is for the heart to pump. This undoubtedly increases the burden of the heart and, in the long term, will lead to a series of CVDs and damage to the heart, blood vessels, brain, kidneys, and so on.
Fortunately, blood pressure is the most important preventable factor of CVDs. Early prevention and management of hypertension are the major and most effective means of improving people’s health levels worldwide. Healthy lifestyles (healthy diet, non-alcohol consumption, non-tobacco use, and physical activity), early detection, evaluation of blood pressure levels, proper diagnosis, and treatment with low-cost medication are beneficial in the prevention and control of hypertension [2]. The seventh report of the Joint National Committee on Prevention, Detection, Evaluation, and Treatment of High Blood Pressure (JNC7) [3], which is funded and published by the US National Institutes of Health, is widely adopted. According to this report, different BP levels are divided into different hypertension categories, including normotension, prehypertension, stage 1 hypertension, and stage 2 hypertension. Due to the number of research participants, this study adopted the three BP categories of normotension, prehypertension, and hypertension, labeled according to the BP ranges of the JNC7 report [3].
Clearly, earlier attention and treatment are more effective in preventing hypertension and other CVDs. However, as we know, most hypertension patients have no symptoms in the stage of elevated blood pressure and even in hypertension. Thus, many people miss the best time for treatment and experience some complications. However, some physiological signals change based on blood pressure level [4,5], such as electrocardiogram (ECG) and photoplethysmography (PPG). The morphological changes in physiological signals mainly reflect the change of function status of the heart and vascular system. Therefore, the morphological information of PPG could be used to assess hypertension [6]. For this purpose, the Medical Information Mart for Intensive Care (MIMIC) database [7,8] was used to collect the dataset for this study, which involves arterial blood pressure (ABP), ECG and PPG signals.
Many researchers have used the MIMIC database assuming that all simultaneously collected signals were synchronized [9,10,11,12,13]. However, the creators of the MIMIC database have reported errors in the data matching and alignment in some recordings, as mentioned by Clifford et al. [14], confirming that not all signals were synchronized. This contradiction motivated our study, and we thought it would be useful to test the synchronicity-dependent features (features that rely on the time interval between ECG and PPG events) and asynchronicity-dependent features (features that rely only on features extracted from PPG events) to gain insights about the usability of the MIMIC database for evaluating hypertension either by using ECG and PPG signals or by using PPG alone.
The rest of this paper is organized as follows: Section 2 explains the methods used in this study, including data collection, signal process, and feature extraction. Section 3 shows the comparison results of the different classification models and different feature sets. Finally, Section 4 and Section 5 discuss the results and conclusions on the differences and optimizations of arterial wave propagation theory and PPG morphological theory, respectively.

In this study, the data were collected from the MIMIC database, which is a free-to-use database that contains tens of thousands of Intensive Care Unit (ICU) patients [7,8]. The recordings with arterial blood pressure (ABP, measured using a catheter in the radial artery), electrocardiograph (ECG) and photoplethysmography (PPG) were collected and archived for this study. During data collection, there were some abnormal and noisy recordings, for example, missing peak, pulsus bisferiens, no signal (sensor-off), and so on. These recordings were excluded in this study. Meanwhile, to explore and model the relationship between ABP, ECG, and PPG signals, 120 one-second-length signals with stable, complete ECG, ABP, and PPG signals without heart disease except for hypertension were cut from raw recordings for each subject. In the end, 121 subjects’ records, each 120 s in length, were collected in this research.

The definition of PAT in the literature is highly inconsistent [15]. On many occasions, PAT is used to refer to Pulse Transit Time (PTT), and in other publications, PTT referred to as PAT [15]. Moreover, the calculation of PAT is not consistent in the literature, but some general convention exists. It is worthy to note that the R-wave of an ECG and the foot of the PPG waveform is perhaps the most commonly used in the literature. In 2013, Choi et al. [16] tested three different measurement points for PAT, including the peak (PATRS), middle (PATRb-2 or PATW-1), and end (PATRO) of the PPG waveform. Their study recommended the use of PAT-middle as it is highly correlated with BP, and therefore, in our study we used the PATRb-2 to represent the PAT feature.

As the referenced blood pressure source of this study, the original ABP signal did not undergo any preprocessing. Systolic blood pressure (SBP) and blood pressure categories were extracted and labeled directly from the original ABP waveform signal [17]. A 0.5–10 Hz 4th Chebyshev II bandpass filter was adopted to remove the noise of raw PPG signals and improve the signal quality index (SQI) [18], and a 0.5–40 Hz 4th Butterworth bandpass filter was used to filter the noise of raw ECG signals [19]. Additionally, a normalization process was conducted for filtered ECG and PPG signals to divide the pulsating part of blood volume (the AC part) by the non-pulsating part (the DC part). Further, two forward differential processes were implemented to acquire the velocity waveform of PPG signals (VPG) and the acceleration waveform of PPG signals (APG). Note, the first order differential to the original PPG signal to obtain the VPG signal, and the second order differential to the original PPG signal to obtain the acceleration of PPG waveform signals. To visualize main events within these signals, the TERMA framework [20] and Eventogram [21] can be used. Finally, ECG, PPG, VPG, and APG were together regarded as the feature extraction signal resources.
In this study, the feature points were extracted beat by beat, and the heart-beat pair was divided by the R wave of the ECG, which was identified by a reliable detector [22,23,24]. In one beat period, some feature points of PPG and its derivatives were defined [25], and the detailed waveforms and names are clearly marked in Figure 1. Several types of features were defined based on ECG, PPG, VPG, and APG signals. They are the pulse arrival time (PAT) extracted from ECG and PPG signals; PPG morphology features (135 features) extracted from PPG, VPG, and APG signals, including time spans (23 features); PPG amplitudes (14 features); features of VPG and APG (20 features); waveform area (4 features); power area (15 features); ratio (43 features); and slope (16 features). The detailed features are defined as follows:

Several classifiers are discussed in the literature; however, we selected four distinctive classifiers: Logistic Regression, AdaBoost Tree, Bagged Tree, and K Nearest Neighbors (KNN). These classifiers represent different classification theories such as regression, decision tree, cluster, and bagged decision tree. From the results, we can see that KNN achieves better classification performance than the others. As we know, KNN is a very common classifier that can be used in many applications and can be easy to realize.
In this study, the dataset was divided into a training set (70%) and a testing set (30%). In the training phase, the training adopted 10-fold cross validation to validate the generalization ability of the trained model. The trained model was then used to predict for the testing set. The F1 score was calculated as an evaluation measure, as follows: where Precision = TP/(TP + FP) and Recall = TP/(TP + FN). TP stands for true positives, FP stands for false positives, and FN stands for false negatives. To comprehensively evaluate the trained models, various evaluation indexes were used, including sensitivity (SE), specificity (SP), and the F1 score, which is the harmonic mean of precision and sensitivity. In this study, all the signal processing, modeling, and evaluating were carried out via MATLAB software (R2017b version), developed and released by MathWorks (Natick, MA, USA) company.

PPG morphological features were shown to achieve better classification performance than PAT using the MIMIC database. PPG signals contain sufficient physiological information about the activity of the heart and arteries. Although they are easily affected by many factors, the 10 evaluated PPG features achieved an acceptable classification performance. This indicates that the PPG signal, which is the status response of the heart and arteries, varies according to the BP levels, such as normotension, prehypertension, and hypertension. Interestingly, adding the PAT feature to the PPG feature set improved the overall classification performance, even though not all ECG and PPG signals in the MIMIC database were synchronized. Our results show that the PAT feature and PPG features have great potential to manage BP levels. 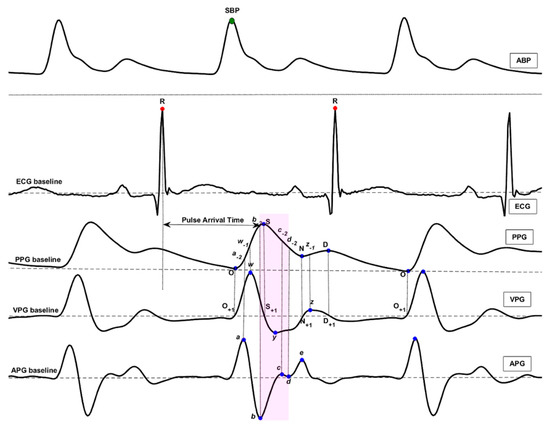