Impulsivity is an important risk factor for suicide and therefore, identifying biomarkers associated with impulsivity could be important in evaluating psychiatric patients. Currently, assessment of impulsivity is based solely on clinical evaluation. In this study, brain-derived neurotrophic factor (BDNF), a nerve growth factor, was evaluated as a potential biomarker for impulsivity. We hypothesize that elevated BDNF may result in aberrantly high neurobiological activation, promoting impulsive behaviours. A total of 343 participants were recruited for the study and were divided into two groups, (i) elevated suicide risk (participants admitted to hospital with a recent suicide attempt), and (ii) average suicide risk (non-psychiatric participants and psychiatric participants without a history of suicide attempts). Impulsivity was measured by the Barratt Impulsiveness Scale, and serum BDNF levels were obtained. A regression analysis was performed to identify associations between BDNF and impulsivity. We identified a subtle but significant positive association between BDNF and impulsivity in the average risk for suicide group (B = 0.189, p = 0.014). The same association was not reproduced in the elevated risk group B = −0.086, p = 0.361). These findings lay the foundation to further explore the utility of BDNF as a biomarker for impulsivity to allow for early intervention. View Full-Text
Keywords: BDNF; risk assessment; impulsivity BDNF; risk assessment; impulsivity
►▼ Show Figures 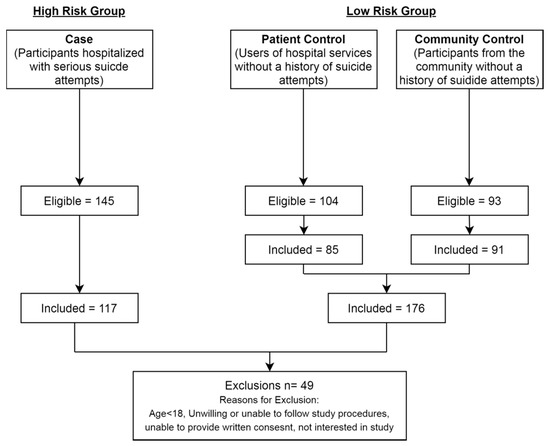 
Pasyk, Stanislav; Sanger, Nitika; Kapczinski, Flavio; Samaan, Zainab. 2020. "Evaluation of BDNF as a Biomarker for Impulsivity in a Psychiatric Population." Diagnostics 10, no. 6: 419.