Reporting Standards for a Bland–Altman Agreement Analysis: A Review of Methodological Reviews

Androgenic alopecia (AGA) is the most common type of progressive hair loss in man. The search for reliable predictors of the conservative treatment’s effectiveness is an urgent problem today. Forty-eight patients with AGA, stages I–IV by the Norwood–Hamilton scale, were treated for 4 months with 5% topical minoxidil joints with corrections for trace element and vitamin imbalances. In most cases, the positive therapy’s effect was shown in the parietal but not in the occipital area, whereas that effect was observed in others. The attempts to associate the therapy’s effectiveness with initially defined genetic, hormonal, and metabolic parameters showed the absence of differences between groups with positive and negative outcomes. Among the studied nutrient parameters (Zn, Cu, Mg, Ca, Fe, and Se, as well as vitamins B12, E, D, and folic acid), differences between these groups was shown in zinc content only. The starting point from a zinc plasma level above 10 µmol/L likely provides the success of the subsequent conservative therapy and correlates with an increase in the hair density and diameter in the parietal area. The integral predictive value of the Zn plasma level was assessed as 72.3% (positive predictive value: −88%; and negative predictive value: −55%). View Full-Text
Keywords: androgenic alopecia; zinc; minoxidil; trace elements; hormones; hair follicles androgenic alopecia; zinc; minoxidil; trace elements; hormones; hair follicles
►▼ Show Figures 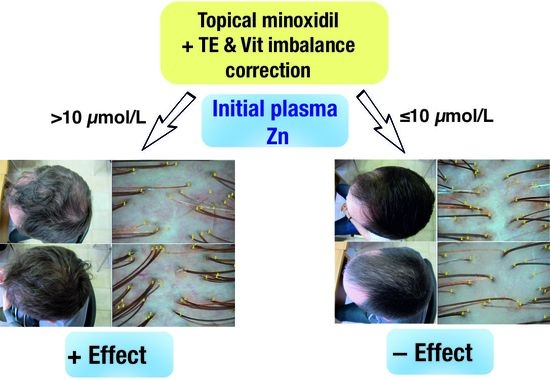