The Effects of Dark Incubation on Cellular Metabolism of the Wild Type Cyanobacterium Synechocystis sp. PCC 6803 and a Mutant Lacking the Transcriptional Regulator cyAbrB2

Motile filamentous cyanobacteria, such as Oscillatoria, Phormidium and Arthrospira, are ubiquitous in terrestrial and aquatic environments. As noted by Nägeli in 1860, many of them form complex three-dimensional or two-dimensional structures, such as biofilm, weed-like thalli, bundles of filaments and spirals, which we call supracellular structures. In all of these structures, individual filaments incessantly move back and forth. The structures are, therefore, macroscopic, dynamic structures that are continuously changing their microscopic arrangement of filaments. In the present study, we analyzed quantitatively the movement of individual filaments of Phormidium sp. KS grown on agar plates. Junctional pores, which have been proposed to drive cell movement by mucilage/slime secretion, were found to align on both sides of each septum. The velocity of movement was highest just after the reversal of direction and, then, attenuated exponentially to a final value before the next reversal of direction. This kinetics is compatible with the “slime gun” model. A higher agar concentration restricts the movement more severely and, thus, resulted in more spiral formation. The spiral is a robust form compatible with non-homogeneous movements of different parts of a long filament. We propose a model of spiral formation based on the microscopic movement of filaments. View Full-Text
Keywords: cyanobacteria; Phormidium; supracellular structure; biofilm; spiral formation; emergence of order; slime gun model cyanobacteria; Phormidium; supracellular structure; biofilm; spiral formation; emergence of order; slime gun model
►▼ Show Figures 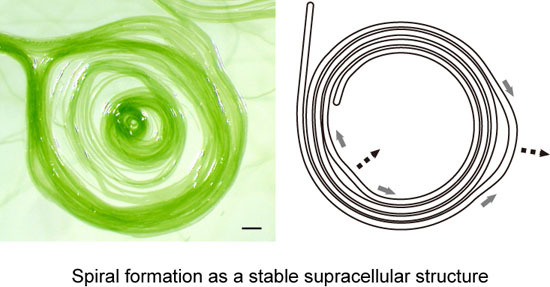