Weight Loss in Advanced Cancer: Sex Differences in Health-Related Quality of Life and Body Image
Next Article in Special Issue

Viroids and Viroid-like Circular RNAs: Do They Descend from Primordial Replicators?

:
Viroids are a unique class of plant pathogens that consist of small circular RNA molecules, between 220 and 450 nucleotides in size. Viroids encode no proteins and are the smallest known infectious agents. Viroids replicate via the rolling circle mechanism, producing multimeric intermediates which are cleaved to unit length either by ribozymes formed from both polarities of the viroid genomic RNA or by coopted host RNAses. Many viroid-like small circular RNAs are satellites of plant RNA viruses. Ribozyviruses, represented by human hepatitis delta virus, are larger viroid-like circular RNAs that additionally encode the viral nucleocapsid protein. It has been proposed that viroids are direct descendants of primordial RNA replicons that were present in the hypothetical RNA world. We argue, however, that much later origin of viroids, possibly, from recently discovered mobile genetic elements known as retrozymes, is a far more parsimonious evolutionary scenario. Nevertheless, viroids and viroid-like circular RNAs are minimal replicators that are likely to be close to the theoretical lower limit of replicator size and arguably comprise the paradigm for replicator emergence. Thus, although viroid-like replicators are unlikely to be direct descendants of primordial RNA replicators, the study of the diversity and evolution of these ultimate genetic parasites can yield insights into the earliest stages of the evolution of life.
Keywords:
viroids; ribozyviruses; primordial replicators; ribozymes; origin of life

As discussed, the possibility that viroids and other similar cccRNAs are direct descendants of primordial replicators that inhabited the hypothetical ancient RNA world appears to be remote. However, the likely relatively recent origins of viroid-like RNAs cannot deprive them of the status of minimal replicators. It does not appear to be a chance coincidence that the Spiegelman monster, the minimal parasite artificially evolved under conditions when the sole selective factor was the speed of replication, is the same size as the smallest viroids and satRNAs [60]. This size, approximately 200 nt, is likely to be close to the ultimate low bound for a replicator.
Replicators are genetic elements that encode information that is necessary and sufficient for their replication but lack the full complement of genes required for providing energy and building blocks for replication [80,81,82,83,84]. For energy and building blocks, replicators depend on reproducers, biological entities whose reproduction involves physical rather than only informational continuity as in the case of replicators [81,84]. The paradigmatic reproducers are, obviously, cells—omnis cellula e cellula, according to Virchow. More precisely, all cellular life forms can be conceived as symbioses of a reproducer and a replicator, the genome [85]. Cellular genomes are ultimate cooperative replicators, but generally, replicators span wide ranges of replicative autonomy and aggressiveness/cooperativity with respect to the host reproducer [83,86].
Some replicators, such as many large viruses or self-synthesizing transposons, encode a (nearly) complete replication and sometimes transcription machinery, and thus possess a high degree of replicative autonomy. Others rely mostly or completely on the host replication and expression apparatus. Viroids are the extreme manifestation of the latter strategy—arguably, the ultimate parasites. Generally, the information content of replicators splits into “replicase expression signal” (RES), which can consist of one or more genes encoding replicative enzyme (s) and possibly various accessory proteins, and “replicase recognition signal” (RRS), non-coding elements that are necessary and sufficient to hijack the host replication (or expression) machinery [87]. Viroids have adopted the ultimate parasitic strategy, namely, selection for maximum efficiency of RRS accompanied by complete elimination of RES, under the reduction scenario or by never acquiring RES, under the de novo scenario. More precisely, this is the evolutionary strategy of pospiviroids, whereas avsunviroids add a notable twist by engaging viroid-embedded ribozymes in some stages of replication. The HHRs appear easy to evolve [79] and could be the simplest evolutionary step towards increased replicative autonomy.
Evolution towards ultimate parasitism occurs already at the stage of retrozymes as well as other non-autonomous transposons that hijack the replication and transposition machinery of autonomous transposons with closely similar RRS. However, retrozymes have only limited replication capacity restricted to copy-paste transposition within the host genome. Viroids likely escaped from the host genomes by evolving the ability to redirect the host DdRP towards viroid RNA replication. Identification of an intermediate on the proposed evolutionary path from retrozymes to viroid-like agents—namely, a retrozyme capable of replicating autonomously within a cell—would be a major step in demonstrating the emergence of viroid-like replicators as an ongoing process. There are some indications that retrozymes might possess that capacity, in particular because multimeric intermediates of both polarities have been detected and the high error rate of retrozymes suggests polymerization by DdRP, but definitive experimental evidence is still lacking [69,76].
Although viroids are unlikely to be relics of the pre-cellular stage of life evolution, they provide a unique window into the origin of parasitic replicators, which most likely occurred on multiple, independent occasions, via retrozyme escape and, possibly, de novo. Similar events could have transpired during the pre-cellular stage of evolution where ultimate parasites similar to viroids with respect to size and reproduction cycle, but not necessarily secondary structure, could have evolved from autonomous replicators.

If emergence of viroid-like replicators is an ongoing process, there seems to be no reason why some of these replicators would not evolve to encode proteins, and indeed, although neither viroids nor retrozymes encompass protein-coding genes, other members of the viroid brotherhood do. The best studied case, obviously, are the ribozyviruses that encode a single protein of unclear provenance, which is employed for a typical virus function, encapsidation of the genome [38,39]. An unrelated example is a satRNA of rice yellow mottle virus (satRYMV), the smallest known satRNA at 220 nt, that has been shown to encode proteins in overlapping open reading frames, covering most of the genome, and reiteratively translated, in parallel to the replication of satRYMV via reiterative transcription [88]. Translation of satRYMV proceeds through multiple rounds by switching frames and thus yielding proteins of supergenome size. Notably, satRYMV contains ribozymes in both polarities within the protein-coding region. Although too far reaching conclusions, perhaps, should not be drawn from this single case, satRYMV seems to present a remarkable example of de novo emergence of proteins. Search for other similar cases might shed light on the evolution of protein coding in new replicators and, possibly, even at processes that occurred in the primordial RNA world.
More generally, it appears likely that the diversity of protein-coding viroid-like agents is substantially underappreciated as suggested, in particular, by the recent discovery of an expanded range of ribozyviruses [43,44,45,46,47]. Furthermore, it seems likely that evolution of coding and non-coding viroid-like RNAs is a two-way street, with protein-coding genes both gained and lost on multiple occasions. Comprehensive screening of the rapidly growing metagenomic data for different types of such agents should reveal their actual diversity and evolutionary relationships.

Viroids and viroid-like RNAs are minimal replicators, the only known ones that encode no proteins and probably do not far exceed the theoretical minimum replicator size. Therefore, the idea that these RNA replicators are relics of the hypothetical primordial RNA world appears both straightforward and highly attractive. Yet, this scenario seems to be poorly compatible with the available evidence including both the host range of these agents that currently appears to be limited to multicellular eukaryotes and the properties of the viroid-like RNAs that are clearly attuned to replication by sophisticated protein polymerases. In contrast, a direct line of descent appears to be traceable from retrozymes, non-autonomous retrotransposons, to viroids. It appears likely that viroid-like replicators evolved from retrozymes, possibly, on several independent occasions. However, this likely relatively recent origin hardly diminishes the fundamental interest of viroid-like RNAs as the paradigm for the emergence of new replicons as ultimate parasites, at different stages of life’s evolution, including the pre-cellular stage. The existence of protein-coding viroid-like genomes, those of ribozyviruses and the single so far characterized protein-coding viroid-like satRNA, indicates that there is no impassable gulf between the non-coding, minimal RNA replicators and protein-coding replicators including bon fide viruses. Conceivably, evolutionary transitions between these two types of replicators occurred repeatedly during evolution. The recent major expansion of the diversity of ribozyviruses that until then have been represented solely by human HDV suggests that we are presently unaware of the full range of viroid-like replicators, and even might be missing most of their diversity. Comprehensive search of transcriptomes and metatranscriptomes for viroid-like RNAs using dedicated computational pipelines can be expected to substantially expand their diversity and shed light on their origins and evolutionary relationships.

Conceptualization, E.V.K., writing—original draft preparation, B.D.L., writing—review and editing, B.D.L., E.V.K. All authors have read and agreed to the published version of the manuscript.

Figure 1 and Figure 2 were created with BioRender.com (accessed on 15 December 2021). This article is dedicated to Theodor Otto Diener, the discoverer of viroids, on the occasion of his 100th anniversary. 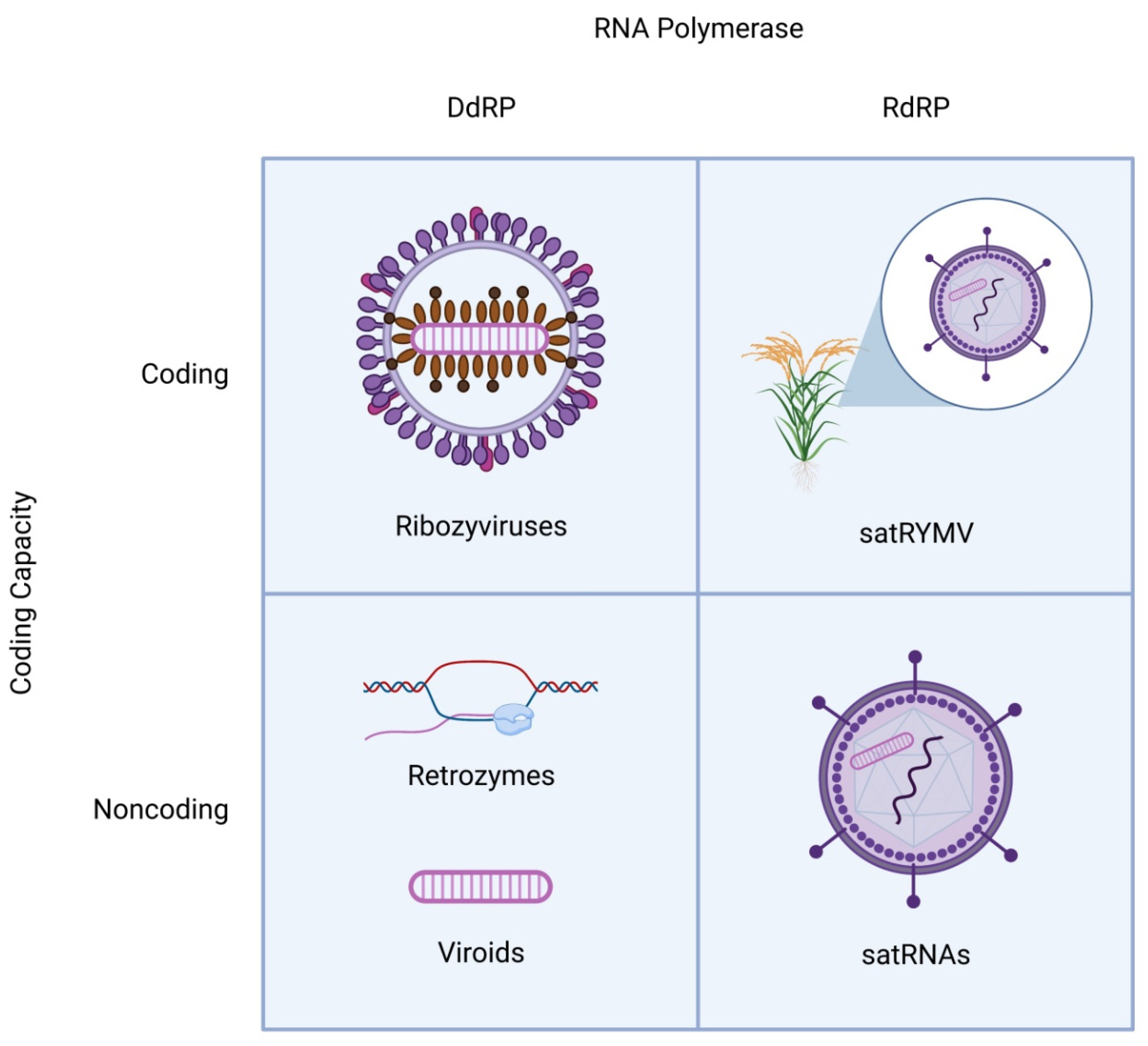 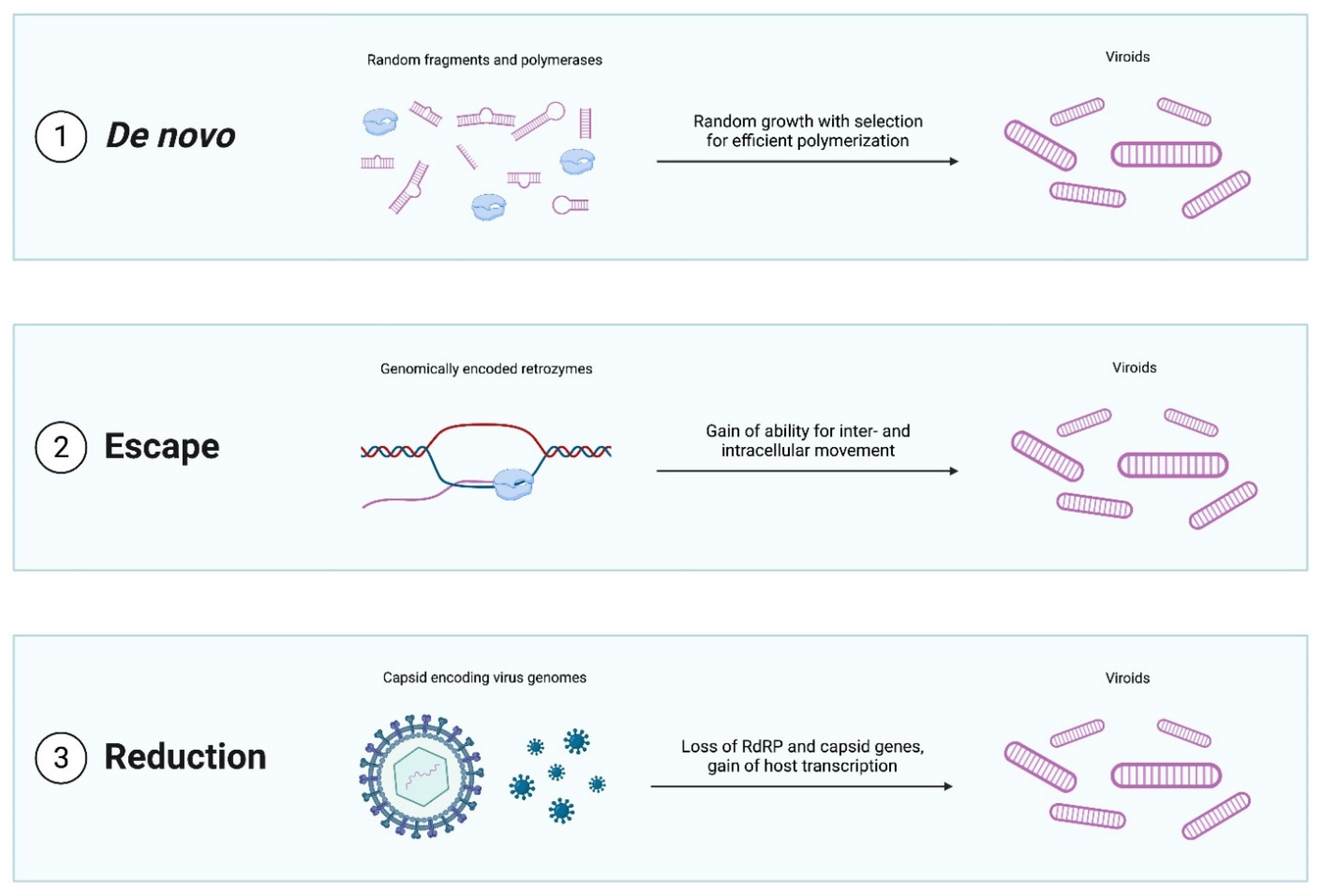