Isolation, Characterization and Neuroprotective Activity of Folecitin: An In Vivo Study
Next Article in Special Issue

Protein Hydration in a Bioprotecting Mixture
Previous Article in Journal

The hydrogen bonding of water and water/salt mixtures around the proline-based tripeptide model glycyl-l-prolyl-glycinamide·HCl (GPG-NH2) is investigated here by multi-wavelength UV resonance Raman spectroscopy (UVRR) to clarify the role of ion–peptide interactions in affecting the conformational stability of this peptide. The unique sensitivity and selectivity of the UVRR technique allow us to efficiently probe the hydrogen bond interaction between water molecules and proline residues in different solvation conditions, along with its influence on trans to cis isomerism in the hydrated tripeptide. The spectroscopic data suggest a relevant role played by the cations in altering the solvation shell at the carbonyl site of proline., while the fluoride and chloride anions were found to promote the establishment of the strongest interactions on the site of proline. This latter effect is reflected in the greater stabilization of the trans conformers of the tripeptide in the presence of these specific ions. The molecular view provided by UVRR experiments was complemented by the results of circular dichroism (CD) measurements that show a strong structural stabilizing effect on the β-turn motif of GPG-NH2 observed in the presence of KF as a co-solute. View Full-Text
Keywords: peptide; hydrogen bonding; proline; UV resonance Raman peptide; hydrogen bonding; proline; UV resonance Raman
►▼ Show Figures 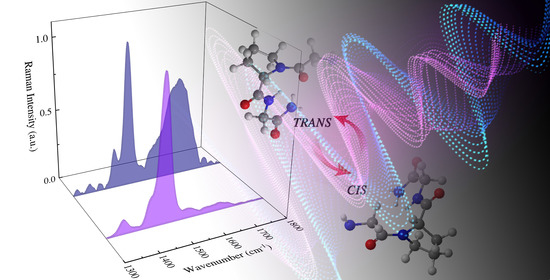