Seagrasses as Posidonia oceanica reproduce mostly by vegetative propagation, which can reduce genetic variability within populations. Since, in clonally propagated species, insurgence of genetic variability can be determined by the activity of transposable elements, we have estimated the activity of such repeat elements by measuring their expression level in the leaves of plants from a Mediterranean site, for which Illumina complementary DNA (cDNA) sequence reads (produced from RNAs isolated by leaves of plants from deep and shallow meadows) were publicly available. Firstly, we produced a collection of retrotransposon-related sequences and then mapped Illumina cDNA reads onto these sequences. With this approach, it was evident that Posidonia retrotransposons are, in general, barely expressed; only nine elements resulted transcribed at levels comparable with those of reference genes encoding tubulins and actins. Differences in transcript abundance were observed according to the superfamily and the lineage to which the retrotransposons belonged. Only small differences were observed between retrotransposon expression levels in leaves of shallow and deep Posidonia meadow stands, whereas one TAR/Tork element resulted differentially expressed in deep plants exposed to heat. It can be concluded that, in P. oceanica, the contribution of retrotransposon activity to genetic variability is reduced, although the nine specific active elements could actually produce new structural variations. View Full-Text
Keywords: Illumina RNA-seq; LTR-retrotransposons; Posidonia oceanica; retrotransposon expression; seagrasses Illumina RNA-seq; LTR-retrotransposons; Posidonia oceanica; retrotransposon expression; seagrasses
►▼ Show Figures 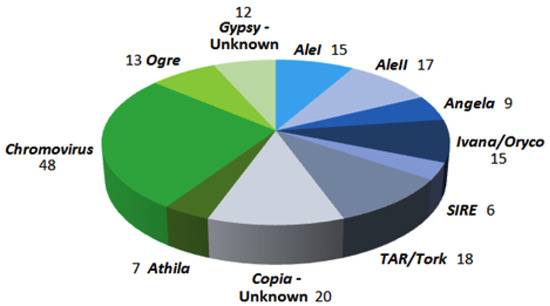