Ultradeep Microbial Communities at 4.4 km within Crystalline Bedrock: Implications for Habitability in a Planetary Context

The search for different life forms elsewhere in the universe is a fascinating area of research in astrophysics and astrobiology. Currently, according to the NASA Exoplanet Archive database, 3876 exoplanets have been discovered. The Earth Similarity Index (ESI) is defined as the geometric mean of radius, density, escape velocity, and surface temperature and ranges from 0 (dissimilar to Earth) to 1 (similar to Earth). The ESI was created to index exoplanets on the basis of their similarity to Earth. In this paper, we examined rocky exoplanets whose physical conditions are potentially suitable for the survival of rock-dependent extremophiles, such as the cyanobacteria Chroococcidiopsis and the lichen Acarospora. The Rock Similarity Index (RSI) is first introduced and then applied to 1659 rocky exoplanets. The RSI represents a measure for Earth-like planets on which physical conditions are potentially suitable for rocky extremophiles that can survive in Earth-like extreme habitats (i.e., hot deserts and cold, frozen lands).
Keywords: Earth-like planets; exoplanets; extremophiles; habitability; Rock Similarity Index (RSI) Earth-like planets; exoplanets; extremophiles; habitability; Rock Similarity Index (RSI)

In recent years, extraterrestrial research has become the ‘holy grail’ of astrobiology. Space missions like CoRoT (Convection, Rotation and planetary Transits) and Kepler have provided a huge amount of data from exoplanetary observations which are catalogued in the Planetary Habitability Laboratory, (PHL-EC, University of Puerto Rico (UPR), Arecibo, 2017, http://phl.upr.edu/projects/habitable-exoplanets-catalogue/data/database) [1]. The PHL-EC data (as of 2018) for different planetary objects, such as radius, density, escape velocity, and surface temperature, have been used to create a metric index called the Earth Similarity Index (ESI) that ranges from 0 (dissimilar to Earth) to 1 (identical to Earth) [2]. The ESI allows Earth-like and potentially habitable planets (PHPs) to be identified on the basis of the observed physical parameters of extra-solar objects.
Exoplanets can be divided into rocky planets of different sizes and gas giants. The masses of rocky planets range from 0.1 to 10 Earth masses, while the radii range from 0.5 to 2 Earth radii [3]. Recently, Kashyap et al. [4] introduced a new technique to estimate the surface temperature of different exoplanets and formulated the Mars Similarity Index (MSI) for the search for extremophilic life forms which are capable of survival in Mars-like conditions.
In 2018, Kashyap et al. [5] introduced two additional indexes: the Active Tardigrade Index (ATI) and the Cryptobiotic Tardigrade Index (CTI). Both the ATI and CTI were designed to catalogue exoplanets according to the potential survivability of extremophilic invertebrates (e.g., Tardigrada (water bears)) on their surfaces. The ATI and CTI are defined as the geometric mean of radius, density, escape velocity, surface temperature, surface pressure, and revolution, in a range from 0 to 1. This paper focuses on rocky exoplanets with Earth-like conditions and surface temperatures varying within a range potentially suitable for growth and reproduction of extremophilic microorganisms.
Extremophiles are organisms which are able to survive extreme physical or geochemical conditions that are lethal, or at least harmful, to most organisms on Earth [6]. These organisms can be found in all kingdoms of life, but most of them belong to Bacteria and Archaea. In addition, such organisms can also be found among animals, fungi, and plants. The organisms considered to be the most tolerant include fungi, lichens, algae, tardigrades, rotifers, nematodes, and some insects and crustaceans [7,8,9,10,11,12,13,14]. This paper focuses on two extremophiles growing on rocks: the cyanobacteria Chroococcidiopsis and the lichen Acarospora [15,16].
Chroococcidiopsis is a photosynthetic primitive cyanobacteria growing on and below rocks and characterized by a high potential to colonization and recolonization of extreme habitats [17]. Chroococcidiopsis is known for its tolerance of harsh conditions, including high and low temperatures, ionising radiation, and high salinity [18]. Verseux et al. [19] proposed that Chroococcidiopsis is an organism capable of living on Mars and potentially capable of terraforming the red planet. Additionally, Chroococcidiopsis was used in tests involving low Earth orbit, impact events, planetary ejection, atmospheric re-entry, and simulated Martian conditions [20,21,22,23].
Acarospora species are crustose lichens inhabiting xerothermic habitats that grow on dry rocks [24] and tolerate harsh conditions such as low and high temperatures, high radiation, or lack of water [15,25]. Research has shown that two Acarospora species are capable of survival in a simulated Martian environment [26].
This paper introduces the Rock Similarity Index (RSI) and calculates RSI for 1659 rocky-iron exoplanets. The RSI is similar to the ATI and CTI (as calculated in [5]), yet differs in that the surface temperature parameter is modified to reflect the potential survivability of rock-dependent extremophiles.
Weight exponent calculation of Mars where the threshold value is: where wx is the weight exponent required, X0 is defined as the reference value. and Xa < X0 < Xb (a and b are the upper and lower limits)

The search for extraterrestrial life forms has given rise to numerous space missions that have enabled researchers to collect data, test different species of extremophiles (e.g., black fungi, cyanobacteria, bryophytes, invertebrates) in space conditions, analyse their physiology [29] in extreme conditions, and finally find potentially habitable exoplanets for Earth-like organisms. Space missions which previously studied extremophiles include EXPOSE-E, EXPOSE-R2, BIOMEX, and CoRoT [30].
Up to now, Earth is the only known rocky planet which both has a developed biosphere and is shielded by a magnetic field that protects it against harmful cosmic radiation [31]. In this analysis, we focused on rocky exoplanets which have physical conditions similar to those of Earth or Mars. We chose two microorganisms, Chroococcidiopsis and Acarospora, that are able to survive, grow, and reproduce in very harsh conditions and in the absence of a planet’s magnetic field. Chroococcidiopsiswas previously selected for colonizing tests on Mars (Russian Expose Mission) because it can grow on rocks, produces oxygen, and tolerates high energy cosmic radiation [32]. Similarly, Acarospora was tested by the EXPOSE-E mission for one and a half years and managed to survive in Mars-like conditions [24].
According to Kashyap et al. [4], Mars, with an ESI value of 0.73, was defined as the limit for planets which could have physical conditions suitable for complex life forms. Based on this criterion, approximately 44 planets have been identified as PHPs. Considering the RSI for 1659 rocky exoplanets with a threshold of 0.82, 21 exoplanets have been found to be PHPs, where physical conditions are suitable for extremophiles such as Chroococcidiopsis and Acarospora.
A very important factor in our analysis is the calculation of the weight exponent for surface temperature. The weight exponents used for each physical factor allow an accurate calculation of the ESI and RSI, so it is crucial to have the correct weight exponent. For the calculation of the RSI, a temperature limit range from 273K to 373K was used [27], and the corresponding weight exponent for surface temperature was calculated to be 2.26. This value corresponds to the conditions which are potentially suitable for rock-dwelling extremophiles to survive. Subsequent space missions, such as the James Webb Space Telescope, will provide deeper insights into potentially habitable planets and their environments. Once the data from these missions have been combined with detailed knowledge on environmental conditions where extremophiles are potentially able to survive, it will be possible to identify potential physical and chemical parameters which should be present on exoplanets or exomoons to be suitable for Earth-like organisms. The RSI proposed by us is a tool which indexes planets that have physical conditions potentially suitable for certain Earth microorganisms. While it is obvious that our index does not provide definitive answers, it does enable us to identify the best candidate exoplanets or exomoons to be chosen for both further research and searches for extraterrestrial life signatures.

The authors declare no conflict of interest. The parties who funded this study had no role in its design, in the collection, analyses, or interpretation of the data, or in the writing of the manuscript and the decision to publish the results. 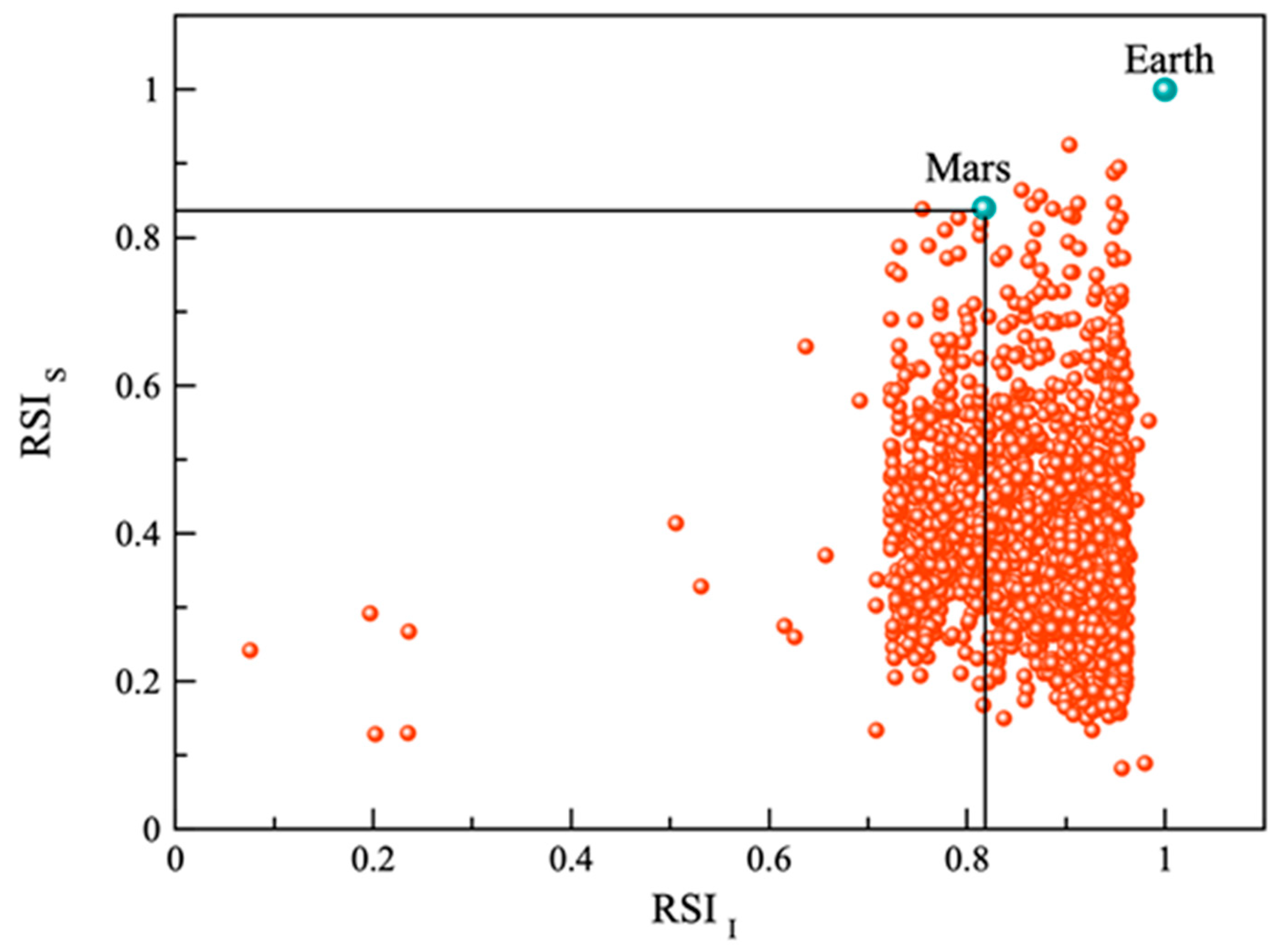