The Mycobiota of the Deep Sea: What Omics Can Offer
Previous Article in Journal

Mass Spectrometry: A Rosetta Stone to Learn How Fungi Interact and Talk

Hortaea werneckii, an extreme halotolerant black yeast in the order of Capnodiales, was recently isolated from different stations and depths in the Mediterranean Sea, where it was shown to be the dominant fungal species. In order to explore the genome characteristics of these Mediterranean isolates, we carried out a de-novo sequencing of the genome of one strain isolated at a depth of 3400 m (MC873) and a re-sequencing of one strain taken from a depth of 2500 m (MC848), whose genome was previously sequenced but was highly fragmented. A comparative phylogenomic analysis with other published H. werneckii genomes was also carried out to investigate the evolution of the strains from the deep sea in this environment. A high level of genome completeness was obtained for both genomes, for which genome duplication and an extensive level of heterozygosity (~4.6%) were observed, supporting the recent hypothesis that a genome duplication caused by intraspecific hybridization occurred in most H. werneckii strains. Phylogenetic analyses showed environmental and/or geographical specificity, suggesting a possible evolutionary adaptation of marine H. werneckii strains to the deep sea environment. We release high-quality genome assemblies from marine H. werneckii strains, which provides additional data for further genomics analysis, including niche adaptation, fitness and evolution studies. View Full-Text
Keywords: Hortaea werneckii; black yeasts; whole-genome sequencing; genome assembly; annotation Hortaea werneckii; black yeasts; whole-genome sequencing; genome assembly; annotation
►▼ Show Figures 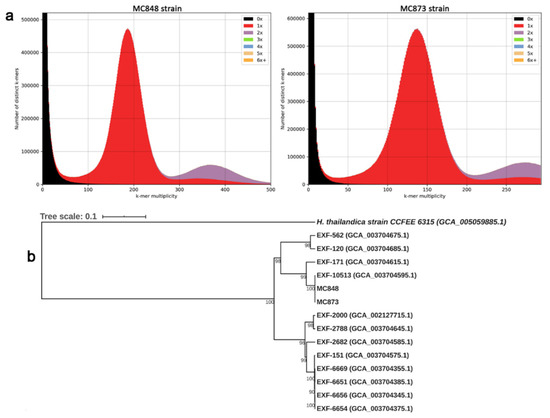