:
Train running safety is considered one of the key criteria for advanced highway trains and bogies. While a number of existing research studies have focused on its measurement and monitoring, this study proposes a new and effective train running a safety prediction framework. The wheel derail coefficient, wheel rate of load reduction, and wheel lateral pressure are considered the decision variables for the safety framework. Data for actual measured rail conditions and vibration-based signals are used as the input data. However, advanced trains and bogies are influenced more by their inertial structures and mechanisms than by railway conditions and external environments. In order to reflect their inertial influences, past data of output variables are used as recurrent data. The proposed framework shares advantages of a general deep neural network and a recurrent neural network. To prove the effectiveness of the proposed hybrid deep-learning framework, numerical analyses using an actual measured train-railway model and transit simulation are conducted and compared with the existing deep learning architectures.
Keywords:
train running safety; hybrid deep learning; railway vehicle; vibration analysis

As mentioned in the previous section, each railway institution has its own running safety definition and rules. In general, train running safety is related to the measurement of forces in a running train. These forces are detected as vibrations in the train structures. Numerous studies have calculated the derailment coefficient (DC) to determine the running safety of trains. Figure 1 shows the simplified forces between running train wheels and rails as KRTS-VE-Part51-2017(R1) [8].
Nomenclature for Figure 1 is provided in Table 1.
(1) and (2) denote the relationships between L and V, where,
DC is calculated with as shown in (3).
Similarly, the dynamic vertical power (DV) is calculated using . In general, these are key criteria for determining the dynamic running safety of trains. Figure 2a,b show the allowable running safety per DC and DV as per the Korean railway standard (KRTS-VE-Part21-2014(R1)) [4], respectively.
As shown in Figure 2, the Y-axis represents the probability of maximum DC () and a probability of minimum axle load (), respectively. Each probability is compared with DC or DV measured in real time, and the running safety of a train is determined. Besides the dynamical criteria, each railway operation institute has different static criteria for running safety. Table 2 lists the static criteria for running safety in South Korea.
As mentioned in the previous section, the measurements and determination of running safety vary with the applied standards, the train’s specifications, and running environments. However, these approaches are oversimplified analyses of the system of forces between the wheel and rail and fails to explain the essence of the train running safety.
In addition, it is difficult to dynamically measure the running safety considering the overall train structure and surrounding environments. Therefore, several existing studies have considered limited measuring environments. Table 3 summarizes the characteristics of existing safety-related research studies.
As summarized in Table 3, most relevant studies have focused on the monitoring of vibrations for determining running safety under limited environments. Moreover, the analysis frameworks depend mostly on comparatively simple nonlinear regression models.
Several studies have overcome this limitation by introducing machine learning techniques. In contrast to regression models, data from either measuring devices, simulation models, or in combination, have been used as input for machine learning methods. Alawad et al. [17] applied a convolutional neural network (CNN) to detect railway risks. Similarly, Yang et al. [18] applied the ResNet model [19] to determine rail defects. Lee et al. [20] applied a generative adversarial network (GAN) approach to estimate the remaining life of train components to detect faults in trains. However, these studies have applied deep learning methodologies to image-based risk detection or train data analyses. There have been few research studies and applications for train running safety using deep learning methods.
Therefore, this study proposes a deep learning-based framework to determine the running safety of a train in real time. Moreover, the proposed framework predicts future running safety by considering a train structure and railway conditions. The following section provides the detailed measurement conditions and framework.

The key objective of this study is to predict the running safety factors considering the train mechanism and railway conditions in real time. As a target train model, we considered a developing high speed train model—high speed electric multiple unit 430 km/h experiment (HEMU-430X). HEMU-430X was developed by the Korean Rail Research Institute (KRRI), a state-run railway research institute by the Korean government, with a maximum speed of 430 km/h. In South Korea, most running express trains have been built based on the HEMU-430X. Figure 3 shows an HEMU-430X and its electromechanical structure, which this study considers as a train model.
This study uses its electromechanical structure to simulate running under real railway conditions. Accelerometers were installed to measure vibrations on an HEMU-430X bogie model. Figure 4 shows the detection points for vibrations, their displacements, and the axes for vibration.
A 3 km real railway is modeled. The modeled railway was based on actual measured data (measuring unit: 25 cm) from Busan to Daegu, South Korea. Figure 5a shows the real railway and its model.
The rail model is parameterized with distance (unit: mm), cross level irregularity (unit: mm), curvature irregularity (unit: 1/km), lateral irregularity (unit: mm), vertical irregularity (unit: mm), and gauge variation (unit: mm), which are obtained from the actual measured railway data. Among these parameters, cross level irregularity is called a “cant”. The cant is related to the rail’s curvature and the running speed of a train. The rail model was programmed using a rail vehicle track interaction simulation software, Vampire Pro software [21]. Figure 5b shows a part of the track distance plot that represents the modeled rail.
Then, transient analyses were conducted using the modeled HEMU-430X and the rail model. As the output of the analyses, vibrations on the displacements are shown in Figure 4, among other results. Figure 6a shows the vibration signals obtained from the transient analysis. The analysis was conducted using the Vampire Pro software.
As shown in Figure 6b, the model and output data were extracted from the integrated data. These data were used for the diagnosis of a train running safety. The data consisted of 23 attributes, as listed in Table 4.
To check the dependency between each attribute, a statistical correlation test was conducted. As shown in Figure 7a, the red circle indicates a positive relationship between the two attributes, while the blue circle indicates a negative relationship. The circle radius indicates the strength of the relationship.
For instance, Figure 7b shows that there is little correlation (r < 0.01) between the distance (from the starting point to the destination as shown in Figure 5a) and the right wheel derail coefficient (DC). This implies that train running safety is influenced more by a train’s structure and electro-mechanism than by rail conditions.
Table 5 summarizes correlation-relationship of railway model parameters with the other factors.
As summarized in Table 5, there is a very weak relationship between vibrations and railway conditions. However, several factors must be considered in the dynamic analysis of train running safety.
This study applies a deep learning method to analyze and predict train running safety. The following section elaborates on this topic in detail.

This research was supported by The Basic Science Research Program through the National Research Foundation of Korea (NRF) funded by the Ministry of Education, S. Korea (grant number: NRF-2021R1A2C1008647) and by a research grant from the R&D Program of the Korea Railroad Research Institute (KRRI), Republic of Korea. 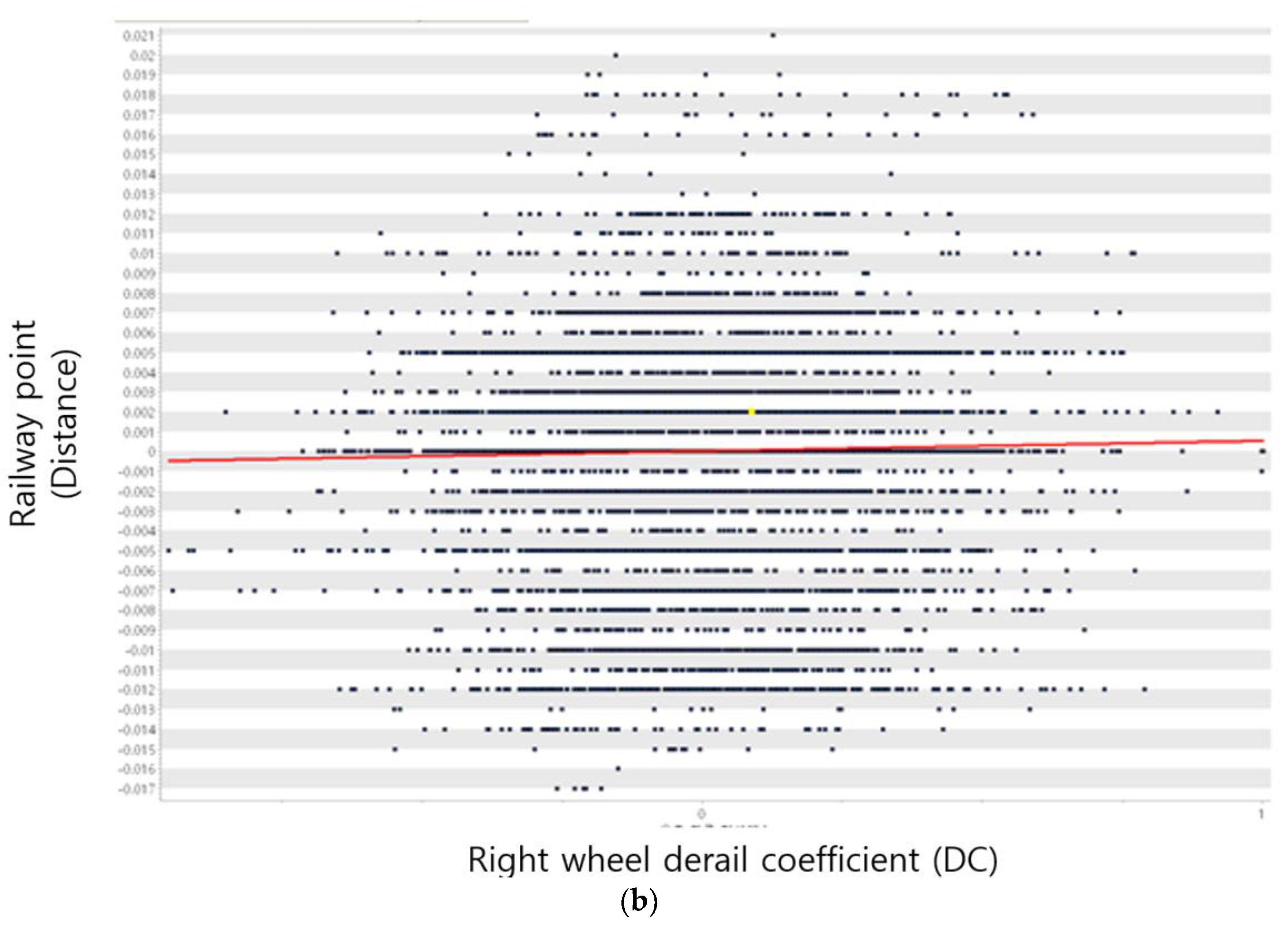 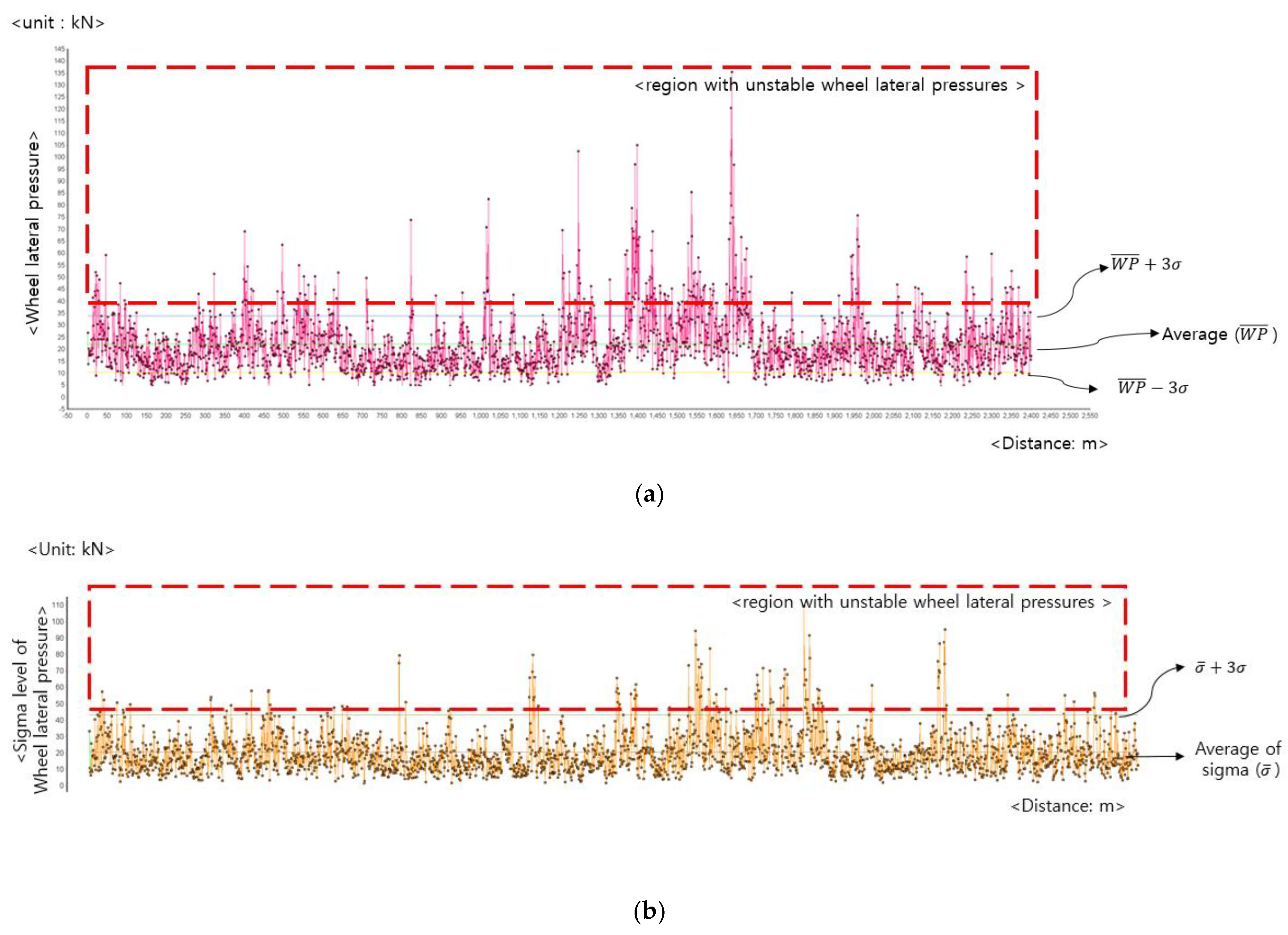 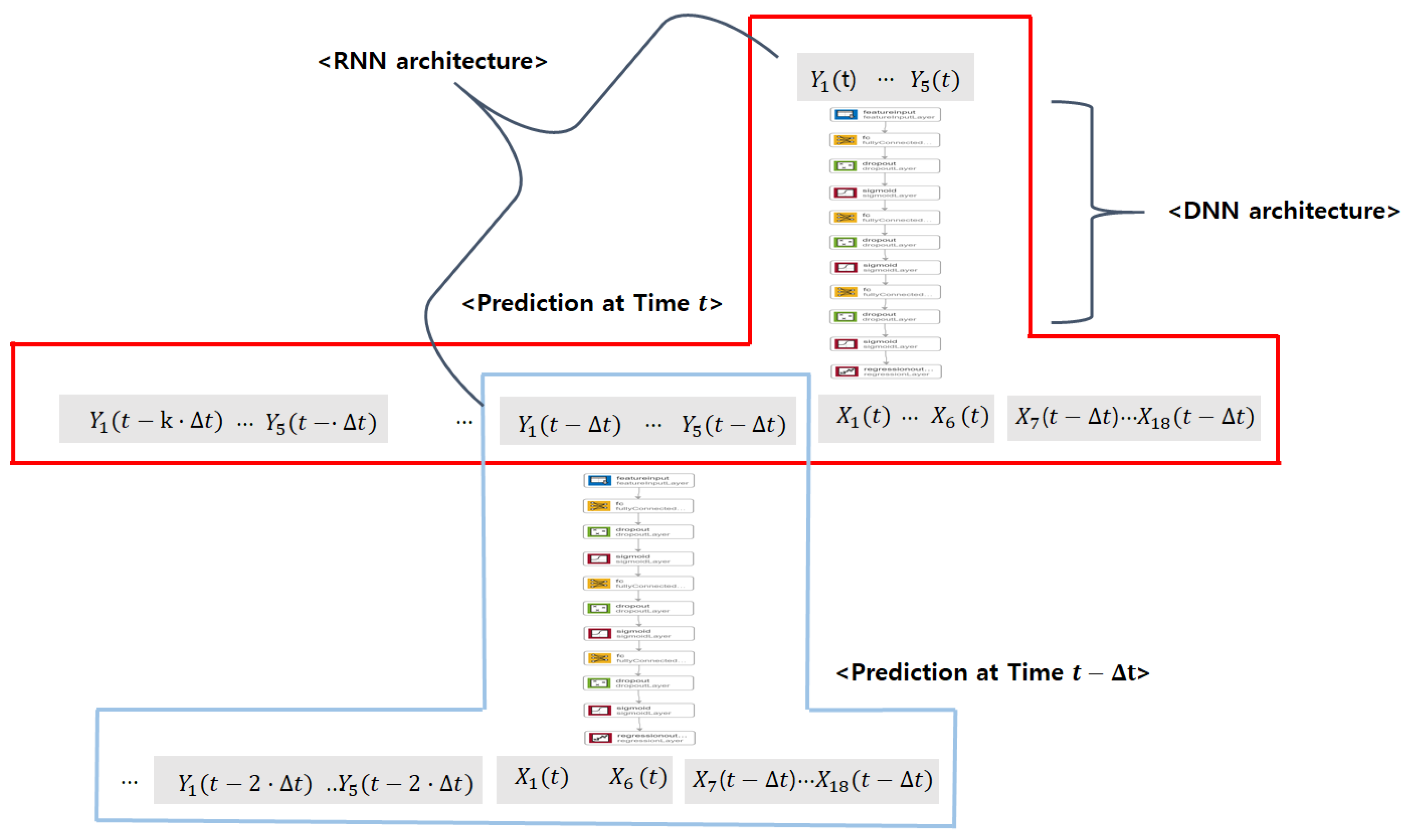 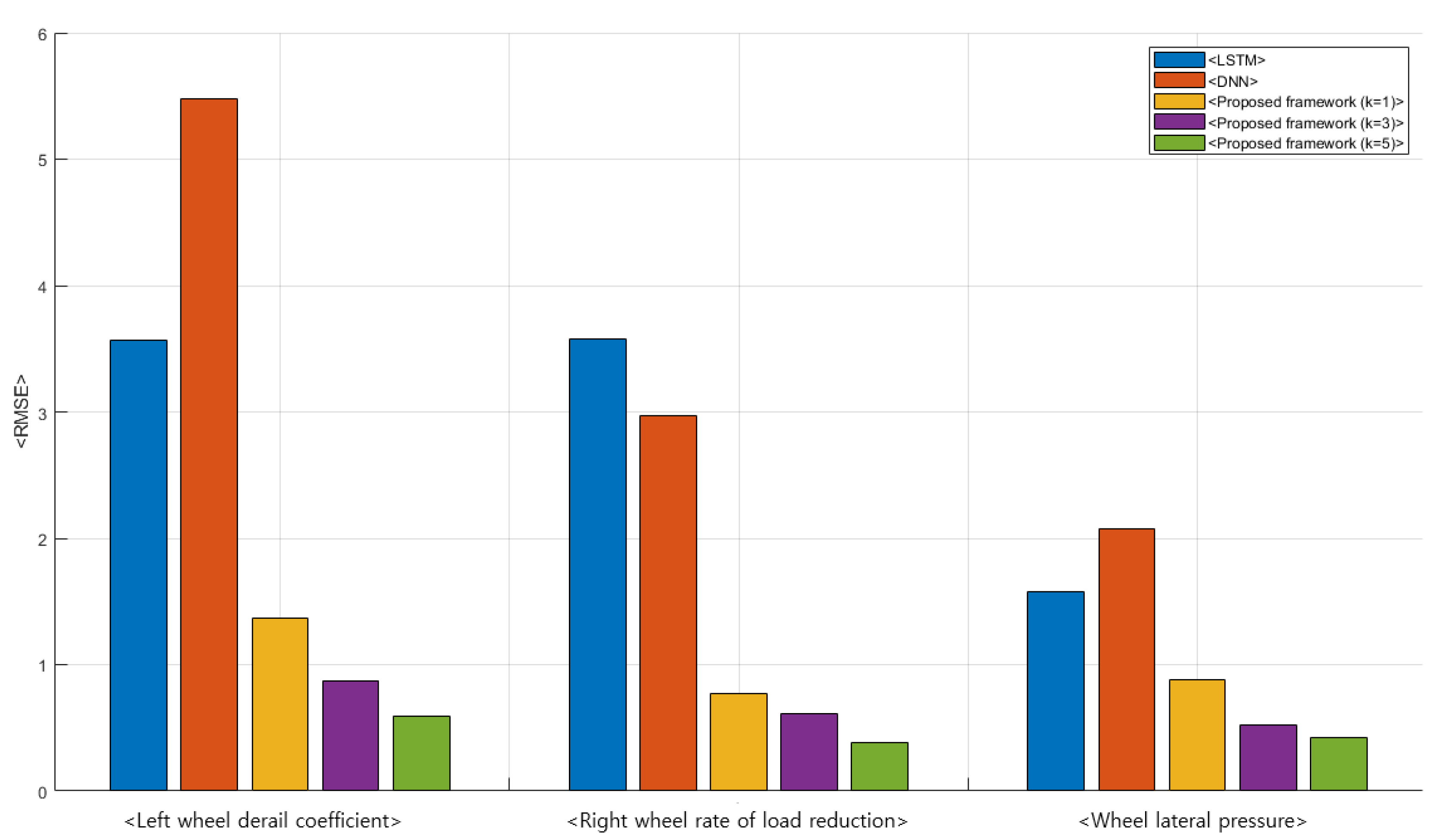