In this study, fluid–structure interaction (FSI) modeling was applied for predicting the fluid flow in a specific peristaltic pump, composed of one metallic roller and a hyperelastic tube pumping a viscous Newtonian fluid. Hyperelastic material dynamics and turbulence flow dynamics were coupled in order to describe all the physics of the pump. The commercial finite element software ABAQUS 6.14 was used to investigate the performance of the pump with a 3D transient model. By using this model, it was possible to predict the von Mises stresses in the tube and flow fluctuations. The peristaltic pump generated high pressure and flow pulses due to the interaction between the roller and the tube. The squeezing and relaxing of the tube during the operative phase allowed the liquid to have a pulsatile behavior. Numerical simulation data results were compared with one cycle pressure measurement obtained from pump test loop data, and the maximum difference between real and simulated data was less than 5%. The applicability of FSI modeling for geometric optimization of pump housing was also discussed in order to prevent roller and hose parts pressure peaks. The model allowed to investigate the effect of pump design variations such as tube occlusion, tube diameter, and roller speed on the flow rate, flow fluctuations, and stress state in the tube. View Full-Text
Keywords: peristaltic pump; hyperplastic models; turbulence models; pulsatile flow peristaltic pump; hyperplastic models; turbulence models; pulsatile flow
►▼ Show Figures 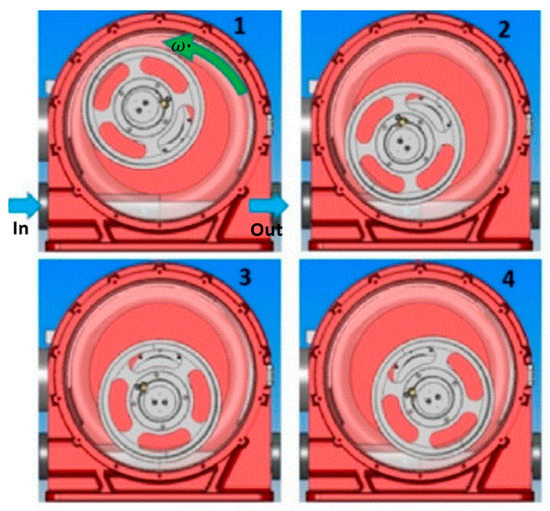