A sample of healthy wind turbines from the same wind farm with identical sizes and designs was investigated to determine the average vibrational signatures of the drive train components during normal operation. The units were variable-speed machines with three blades. The rotor was supported by two bearings, and the drive train connected to an intermediate three-stage planetary/helical gearbox. The nominal 2 MW output power was regulated using blade pitch adjustment. Vibrations were measured in exactly the same positions using the same type of sensors over a six-month period covering the entire range of operating conditions. The data set was preliminary validated to remove outliers based on the theoretical power curves. The most relevant frequency peaks in the rotor, gearbox, and generator vibrations were detected and identified based on averaged power spectra. The amplitudes of the peaks induced by a common source of excitation were compared in different measurement positions. A wind speed dependency of broadband vibration amplitudes was also observed. Finally, a fault detection case is presented showing the change of vibration signature induced by a damage in the gearbox. View Full-Text
Keywords: wind turbine; condition monitoring; vibrations; frequency content; drive train; tower wind turbine; condition monitoring; vibrations; frequency content; drive train; tower
►▼ Show Figures 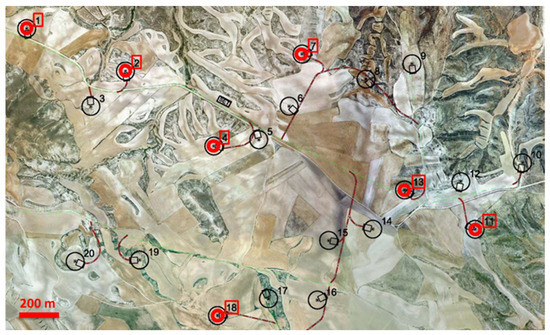