The availability of complex rotating machines is vital for the prevention of catastrophic failures in a significant number of industrial operations. Reliability engineering theories stipulate that optimising the mean-time-to-repair (MTTR) for failed machines can immensely boost availability. In practice, however, a significant amount of time is taken to accurately detect and classify rotor-related anomalies which often negate the drive to achieve a truly robust maintenance decision-making system. Earlier studies have attempted to address these limitations by classifying the poly coherent composite spectra (pCCS) features generated at different machine speeds using principal components analysis (PCA). As valuable as the observations obtained were, the PCA-based classifications applied are linear which may or may not limit their applicability to some real-life machine vibration data that are often associated with certain degrees of non-linearities due to faults. Additionally, the PCA-based faults classification approach used in earlier studies sometimes lack the capability to self-learn which implies that routine machine health classifications would be done manually. The initial parts of the current paper were presented in the form of a thorough search of the literature related to the general concept of data fusion approaches in condition monitoring (CM) of rotation machines. Based on the potentials of pCCS features, the later parts of the article are concerned with the application of the same features for the exploration of a simplified two-staged artificial neural network (ANN) classification approach that could pave the way for the automatic classification of rotating machines faults. This preliminary examination of the classification accuracies of the networks at both stages of the algorithm offered encouraging results, as well as indicates a promising potential for this enhanced approach during field-based condition monitoring of critical rotating machines. View Full-Text
Keywords: rotating machines; condition monitoring; data fusion; artificial neural networks; poly composite spectra rotating machines; condition monitoring; data fusion; artificial neural networks; poly composite spectra
►▼ Show Figures 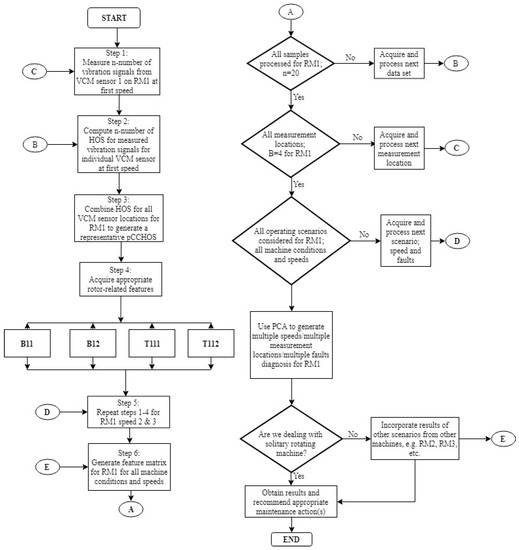