Timing of Paleozoic Exhumation and Deformation of the High-Pressure Vestgӧtabreen Complex at the Motalafjella Nunatak, Svalbard
Previous Article in Journal

Original Calibration of a Garnet Geobarometer in Metapelite

In many metapelitic assemblages, plagioclase is either CaO-deficient or even absent. In such cases, all the widely applied, well-calibrated plagioclase-related geobarometers lose their usage. Fortunately, it has been found that a net-transfer reaction including intracrystalline Fe2+–Ca2+ exchange in garnet is pressure-sensitive, therefore, a garnet geobarometer can be empirically calibrated under pressure–temperature (P–T) conditions of 430~895 °C and 1~15 kbar. The chemical composition range of the calibrant garnet is XCa = 0.02~0.29 and XFe = 0.42~0.91, and covers the majority of garnet in metapelite. The total error of this geobarometer was estimated to be within ±1.3 kbar. The application of this garnet geobarometer to metamorphic terranes certifies its applicability, and this geobarometer can play a unique role, especially when plagioclase is absent or CaO-deficient. Metamorphic P–T conditions can be simultaneously determined by the garnet–biotite pair through the application of the present garnet geobarometer in combination with a well-calibrated garnet-biotite geothermometer. View Full-Text
Keywords: application; calibration; garnet; geobarometer; metapelite application; calibration; garnet; geobarometer; metapelite
►▼ Show Figures 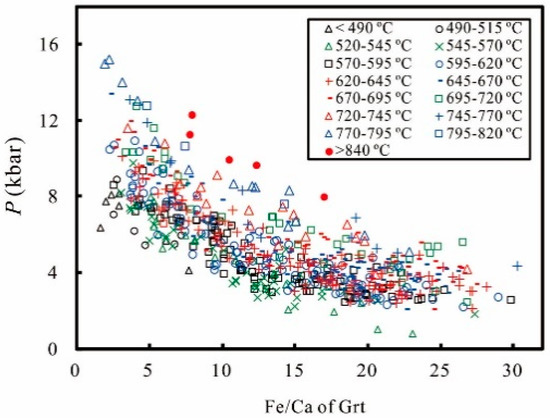