A Workflow to Define, Map and Name a Carbonatite- or Alkaline Igneous-Associated REE-HFSE Mineral System: A Case Study from SW Germany
Next Article in Special Issue

Gold Prospects in the Western Segment of the Russian Arctic: Regional Metallogeny and Distribution of Mineralization
Previous Article in Journal

The tracing of current-conducting channels of the Pechenga structure from Russian to Norwegian territory was the main task of this research. The study was carried out in the framework of the Soviet-Norwegian cooperation “Northern Region” to estimate the prospects for discovery of Cu-Ni deposits in northern Norway. In addition to previous publications of technical character, the emphasis here is on geological description. Experimental measurements have been performed in the field of the “Khibiny” dipole and with the use of DC electrical profiling. The “Khibiny” dipole consists of 160-ton aluminum cable flooded in the Barents Sea bays on opposite sides of the Sredny and Rybachy peninsulas. Measurements were implemented as in the mode of single pulses generated by 80 MW magneto-hydrodynamic (MHD) generator “Khibiny” (“hot” launches) and in the accumulation mode of rectangular current pulses of 0.125 Hz frequency generated by a 29 kW car generator (“cold” launches). From results of measurements, it was concluded that the most promising potential for Cu-Ni deposits Pil’gujarvi formation of the Northern wing of the Pechenga structure is rather quickly wedged out in Norway, while the conductive horizons of the Southern part of Pechenga, which have a weak prospect for Cu-Ni ores, follow into Norway nearly without a loss of power and integral electrical conductivity. View Full-Text
Keywords: Khibiny promising structures; conductive layers; MHD-source “Khibiny”, Pechenga structure; Kola Peninsula Khibiny promising structures; conductive layers; MHD-source “Khibiny”, Pechenga structure; Kola Peninsula
►▼ Show Figures 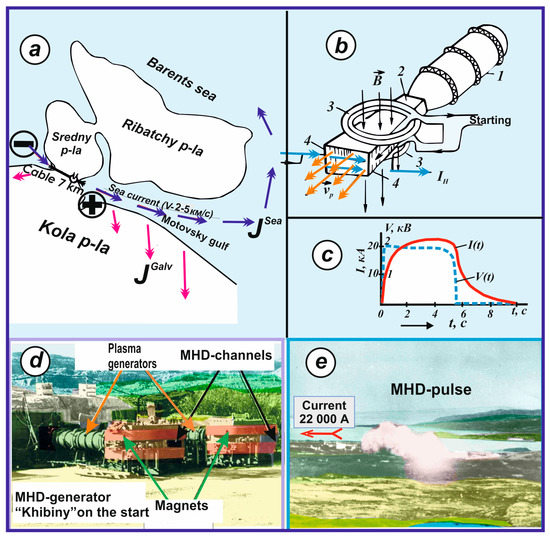 Zhamaletdinov, A.A. Study of the Cu-Ni Productive Suite of the Pechenga Structure on the Russian-Norway Border Zone with the Use of MHD Installation “Khibiny”. Minerals 2019, 9, 96.


Zhamaletdinov AA. Study of the Cu-Ni Productive Suite of the Pechenga Structure on the Russian-Norway Border Zone with the Use of MHD Installation “Khibiny”. Minerals. 2019; 9(2):96.


Zhamaletdinov, Abdulkhai A. 2019. "Study of the Cu-Ni Productive Suite of the Pechenga Structure on the Russian-Norway Border Zone with the Use of MHD Installation “Khibiny”." Minerals 9, no. 2: 96.