The composition, structure and formation features of the exogenous anomalous geochemical fields (AGFs) identified by lithochemical stream sediments (LSSs) are considered using the examples of the Dukat gold–silver ore-forming system and the deposit with the same name. The research was carried out in the Balygychan–Sugoy trough (Magadan region, north–east of Russia). Areal geochemical surveys on the 1:200,000 and 1:50,000 scales were conducted. Exogenous AGFs of basic element indicators of all known mineralization types were studied. It is shown that the surveys on the 1:200,000 scale are characterized by simplicity, relative depth and the possibility to obtain information operatively about the metallogeny of the area as a whole. At the same time, the anomalies were revealed as a result of surveys often making a relatively poor component composition and low contrast compared with ores. The violation of quantitative and sometimes qualitative relationships can be seen between elements, especially those related to gold–silver mineralization. In this situation, the most informative are surveys of LSSs on the 1:50,000 scale. The AGFs were revealed as a result of their performance to have a richer component composition and high contrast, conforming to different ore types. It is shown that, while prospecting for gold–silver mineralization with LSSs in cryolithogenesis zone conditions, the binding forms study of mineralization element indicators is effective. In watercourse heads, where alluvium is practically absent, mosses are proposed for sampling, as they hold the sandy silt material firmly. The obtained results are recommended for use at all stages of prospecting, not only in the north–east of Russia but also in other similar climatic regions. View Full-Text
Keywords: lithochemical stream sediments; anomalous geochemical fields; areal geochemical surveys; gold–silver mineralization; element indicators; element binding forms lithochemical stream sediments; anomalous geochemical fields; areal geochemical surveys; gold–silver mineralization; element indicators; element binding forms
►▼ Show Figures 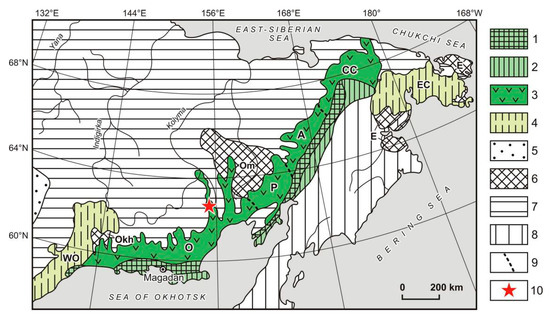