The Mössbauer spectroscopy method was used to study the ligand microstructure of natural arsenopyrite (31 specimens) from the ores of the major gold deposits of the Yenisei Ridge (Eastern Siberia, Russia). Arsenopyrite and native gold are paragenetic minerals in the ore; meanwhile, arsenopyrite is frequently a gold carrier. We detected iron positions with variable distribution of sulfur and arsenic anions at the vertexes of the coordination octahedron {6S}, {5S1As}, {4S2As}, {3S3As}, {2S4As}, {1S5As}, {6As} in the mineral structure. Iron atoms with reduced local symmetry in tetrahedral cavities, as well as iron in the high-spin condition with a high local symmetry of the first coordination sphere, were identified. The configuration {3S3As} typical for the stoichiometric arsenopyrite is the most occupied. The occupation degree of other configurations is not subordinated to the statistic distribution and varies within a wide range. The presence of configurations {6S}, {3S3As}, {6As} and their variable occupation degree indicate that natural arsenopyrites are solid pyrite {6S}, arsenopyrite {3S3As}, and loellingite {6As} solutions, with the thermodynamic preference to the formation of configurations in the arsenopyrite–pyrite–loellingite order. It is assumed that in the variations as part of the coordination octahedron, the iron output to the tetrahedral positions and the presence of high-spin Fe cations depend on the physical and chemical conditions of the mineral formation. It was identified that the increased gold concentrations are typical for arsenopyrites with an elevated content of sulfur or arsenic and correlate with the increase of the occupation degree of configurations {5S1As}, {4S2As}, {1S5As}, reduction of the share of {3S3As}, and the amount of iron in tetrahedral cavities. View Full-Text
Keywords: arsenopyrite; crystal lattice; ligand surroundings; non-equal positions; Mössbauer Effect; gold; “invisible” gold; gold ore deposits arsenopyrite; crystal lattice; ligand surroundings; non-equal positions; Mössbauer Effect; gold; “invisible” gold; gold ore deposits
►▼ Show Figures 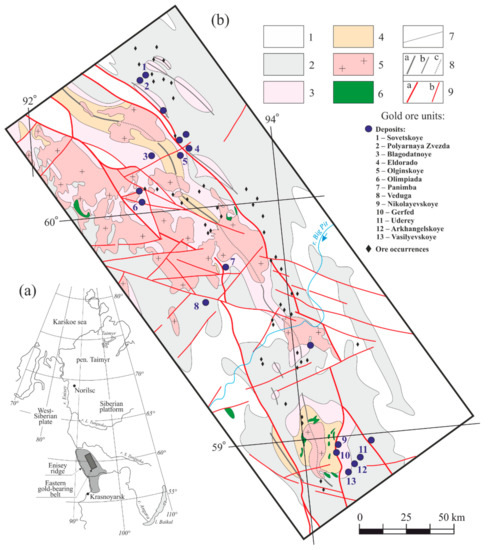