Re Sulfides from Zhelos and Tokty-Oi Intrusions (East Sayan, Russia)

Sulfide mineralization in the province of Trento (northeastern Italy) includes various mineral assemblages that are often silver-rich and have been exploited in different phases from the Middle Ages until the 20th century. This study investigates mineralized rocks from three historically important sites (Calisio mount, Erdemolo lake, and the locality of Cinque Valli), providing new analytical data (Inductively Coupled Plasma-Mass Spectrometry on bulk rocks, and Scanning Electron Microscopy on thin sections) that demonstrate that parageneses do not only include galena, chalcopyrite, and sphalerite but also accessory minerals, such as tetrahedrite, tennantite, acanthite, and sulfosalts (matildite/polybasite). This explains the high content of As (up to 278 ppm), Bi (up to 176 ppm), and Sb (up to 691 ppm) that are associated with Pb–Cu–Zn mineralization. Notably, trace-element ratios indicate that, although closely associated from a geographical point of view, the studied sites are not genetically related and have to be referred to in distinct mineralization events, possibly induced by three diverse magmatic and hydrothermal phases that occurred in the Variscan post-orogenic setting. Besides geological and petrogenetic reconstruction, the new data outline potential geochemical risks, as they reveal a high concentration of elements characterized by marked toxicity that can be transferred into the local soil and water. Therefore, future studies should be devoted to better investigating the metal distribution in the surroundings of ancient mining sites and their geochemical behavior during the weathering processes. View Full-Text
Keywords: sulfide mineralization; Trento; trace-elements; accessory minerals sulfide mineralization; Trento; trace-elements; accessory minerals
►▼ Show Figures 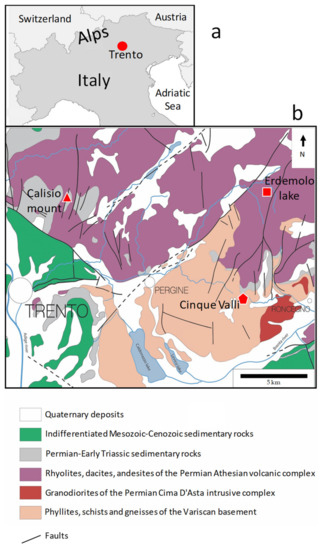