Age and Origin of Monazite Symplectite in an Iron Oxide-Apatite Deposit in the Adirondack Mountains, New York, USA: Implications for Tracking Fluid Conditions

Anton I. Yakushev
5 and

The unique and very large PGE–Cu–Ni Noril’sk deposits are located within the Siberian trap province, posing a number of questions about the relationship between the ore-forming process and the magmatism that produced the traps. A successful answer to these questions could greatly increase the possibility of discovering new deposits in flood basalt provinces elsewhere. In this contribution, we present new data on volcanic stratigraphy and geochemistry of the magmatic rocks in the key regions of the Siberian trap province (Noril’sk, Taimyr, Maymecha-Kotuy, Kulyumber, Lower Tunguska and Angara) and analyze the structure of the north part of the province. The magmatic rocks of the Arctic zone are characterized by variable MgO (3.6–37.2 wt %) and TiO2 (0.8–3.9 wt %) contents, Gd/Yb (1.4–6.3) and La/Sm (2.0–10.4) ratios, and a large range of isotopic compositions. The intrusions in the center of the Tunguska syneclise and Angara syncline have much less variable compositions and correspond to a “typical trap” with MgO of 5.6–7.2 wt %, TiO2 of 1.0–1.6 wt %, Gd/Yb ratio of 1.4–1.6 and La/Sm ratio of 2.0–3.5. This compositional diversity of magmas in the Arctic zone is consistent with their emplacement within the paleo-rift zones. Ore-bearing intrusions (the Noril’sk 1, Talnakh, Kharaelakh) are deep-situated in the Igarka-Noril’sk rift zone, which has three branches, namely the Bolsheavamsky, Dyupkunsky, and Lower Tunguska, that are prospected for discovering new deposits. One possible explanation for the specific position of the PGE–Cu–Ni deposits is accumulation of sulfides in these long-lived zones from the Neoproterozoic to the Mesozoic era during magmatic and metamorphic processes. Thus, trap magmatism, itself, does not produce large deposits, but mobilizes earlier formed sulfide segregations in addition carrying metals in the original magmas. These deposits are the results of several successive magmatic events, in which emplacement of the traps was the final event. View Full-Text
Keywords: Siberian traps; magmatism; geochemistry; PGE–Cu–Ni deposits; paleo-rift Siberian traps; magmatism; geochemistry; PGE–Cu–Ni deposits; paleo-rift
►▼ Show Figures 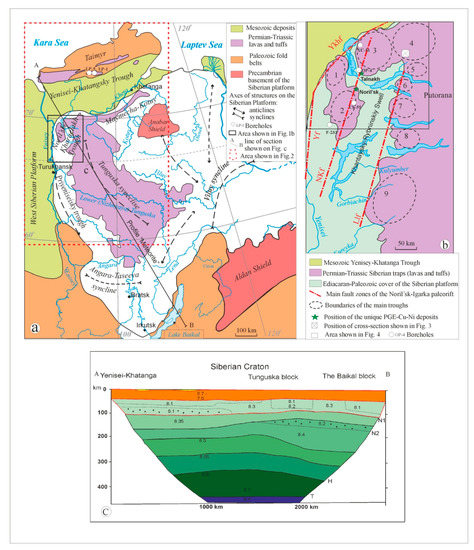