In this study, we assess the diamond exploration potential of the northern East European Platform based on aeromagnetic survey results and the morphologic and geochemical analysis of 1513 grains of kimberlite indicator minerals (KIMs), such as purple pyrope garnet, olivine, and Cr-diopside. These minerals were recovered from samples collected from modern river and stream sediments in four areas located in the north-eastern (within the Arkhangelsk Diamondiferous Province) and south-western (hundreds of kilometers outside of the Arkhangelsk Diamondiferous Province) parts of the Arkhangelsk region in the European part of Russia. All the studied areas are located within ancient cratons, including the Kola, Karelian, and Shenkursk cratons. Based on the major element compositions of the KIMs and thermobarometric calculations, this study confirms that the lithospheric mantle beneath the studied areas is suitable for the formation and preservation of diamonds. The high percentage of KIMs with primary magmatic grain surface morphologies is evidence of the presence of local kimberlite sources within all of the studied areas. The significant amount of diamond-associated KIMs indicates that the potential sources are diamondiferous. Hence, the results suggest that the studied areas can be recommended for further diamond prospecting activity with a high probability of discovering new diamondiferous kimberlites. View Full-Text
Keywords: diamond; exploration; kimberlite indicator mineral; geochemistry; morphology; East European Platform; Arkhangelsk region diamond; exploration; kimberlite indicator mineral; geochemistry; morphology; East European Platform; Arkhangelsk region
►▼ Show Figures 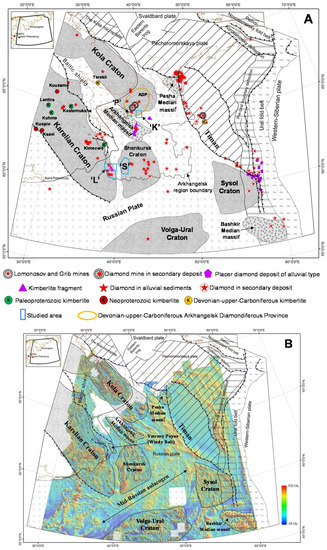