The Mayo Salah pluton, which is located in the North-Cameroon domain of Central African Bold Belt (CAFB), is emplaced as a laccolith in volcano-sedimentary schists of Poli series, and displays features of Rare-metal Granite (RMG). It is made of two main rock groups: (1) the metaluminous barren muscovite granite (MsG) and (2) the Nb-Ta bearing peraluminous leucogranite (MsL) which expresses four subtypes. The evolved Rare-element MsL is subalkaline, slightly peraluminous (ASI = 1.01–1.21), and it displays flat REE chondrite-normalized patterns with a strong negative Eu anomaly (Eu/Eu* = 0.02–0.20). It belongs to the peraluminous low phosphorus Rare-element Granites and L-type igneous rocks, as shown by the relatively low Zr/Hf (4.8–14) and Nb/Ta (1.4–9.0) ratios and the positive slope of the Zr-Hf-Nb-Ta profile in spider diagrams. The rare-element-bearing mineral is represented by columbite-group minerals (CGM) and other Nb-Ta-oxides (Nb-rutile and pyrochlore supergroup minerals). The CGM is classified as Mn-columbite, with Ta# and Mn# ratios increasing from core to rim. Two stages of mineralization are identified; the earliest stage (CGM-I) consists in scattered tabular or prismatic euhedral grains that were related to magmatic fractionation. The latest stage (CGM-II) is expressed as a Ta-rich Mn hydrothermal CGM episode represented as rims and/overgrowths around and/or as veinlet crosscutting CGM-I or in cleavage planes of muscovite. The U-Pb dating of columbite and monazite of the Mayo Salah leucogranite indicates a late-Neoproterozoic magmatic-hydrothermal mineralization event from 603.2 ± 5.3 to 581.6 ± 7.2 Ma, as consistent with both late D2 to D3 events that were recorded in the CAFB in Cameroon, and the associated continental collision environment. The Nb-Ta mineralization of the Mayo Salah pluton provides evidence for the presence of RMG in Northern Cameroon of CAFB, and its temporal association with the youngest period of metallogenic epoch of Nb-Ta-ore formation in Africa associated to Pan-African times. View Full-Text
Keywords: Mayo Salah; rare-metal granite; peraluminous leucogranite; Pan-African Nb-Ta mineralization; magmatic fractionation; U-Pb dating of columbite Mayo Salah; rare-metal granite; peraluminous leucogranite; Pan-African Nb-Ta mineralization; magmatic fractionation; U-Pb dating of columbite
►▼ Show Figures 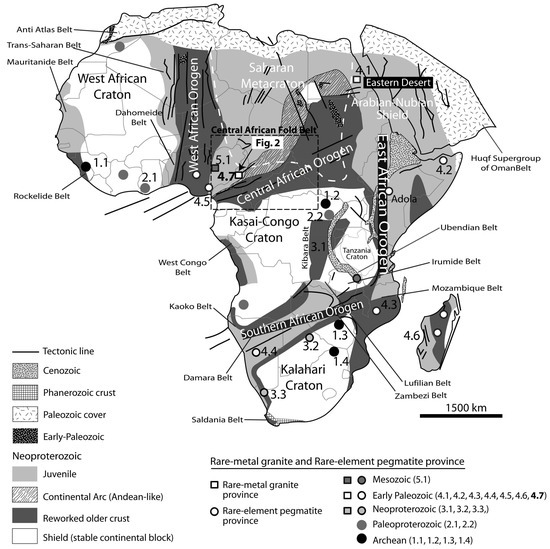