In the southern U.S. states, expansive soils are frequently encountered, presenting an important hazard in geotechnical engineering. This research relies on mineralogical and geochemical clues to explain the swelling behavior of smectite-rich, high-plasticity soils, documented in a series of geomechanical swelling tests that were performed on the soils stabilized with the metakaolin (MKG) and fly ash (FAG) based geopolymers. These geopolymers were mixed with the soil at several concentration levels. The lowest swelling percentage was shown to correspond to the sample stabilized with 12% FAG and was attributed to the neoformation of calcium silicate hydrates that acted as a cementitious material, preventing the soil from expanding by occupying the pore space, thus binding the clay particles together. Conversely, the 12% MKG-stabilized soil exhibited enormous expansion, which was explained by montmorillonite swelling to the point that it gradually began to lose its structural periodicity. The relatively high abundance of the newly formed feldspathoids in MKG-treated samples is believed to have greatly contributed to the overall soil expansion. Finally, the cation exchange capacity tests showed that the percentage of Na+ and Ca2+, as well as the pH value, exercised strong control on the swelling behavior of smectitic soils. View Full-Text
Keywords: smectite swelling; soil expansion; geopolymers; metakaolin; fly ash; calcium silicate hydrate; feldspathoids; stabilizers smectite swelling; soil expansion; geopolymers; metakaolin; fly ash; calcium silicate hydrate; feldspathoids; stabilizers
►▼ Show Figures 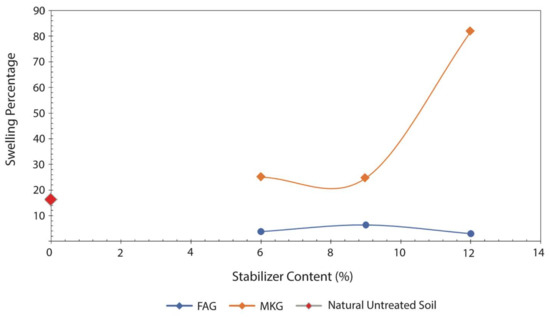