Effects of Metal Ions on the Flotation of Apatite, Dolomite and Quartz
Next Article in Special Issue

Source and Enrichment of Toxic Elements in Coal Seams around Mafic Intrusions: Constraints from Pyrites in the Yuandian Coal Mine in Anhui, Eastern China
Previous Article in Journal

Mineralogical and Geochemical Compositions of the Lopingian Coals in the Zhongliangshan Coalfield, Southwestern China

During a study aiming to recover strategic elements and minerals from coal fly ash and bottom ash (RAREASH and CHARPHITE projects funded, respectively, by the 2nd ERA-MIN and 3rd ERA-MIN Programs of the European Union Commission), it was found that in coal fly ash and bottom ash from Romania and Poland, several morphotypes did not fit into the general fly ash classifications, unless grouped together as “undifferentiated inorganics”. However, the combination of reflected light optical microscopy under oil immersion, scanning electron microscopy, and X-ray microanalysis (SEM/EDS) showed that many of these morphotypes not only have distinctive petrographic patterns but are also characterized by a chemical assemblage dominated by Ca, Mg, and P. In this paper, a survey of the literature is presented together with several detailed studies of samples from the RAREASH and CHARPHITE projects from which the following nomenclature are proposed: “calcispheres” for spongy Ca-rich morphotypes, “calcimagnesiaspheres” for (Ca + Mg)-rich morphotypes with visible MgO nodules and/or periclase (MgO) exsolved from Ca aluminate-silicate glass, and “magnesiaspheres” divided into “magnesiaferrospheres” for (Mg + Fe)-rich morphotypes with magnesioferrite, and “magnesiaoxyspheres” for magnesiaspheres mainly composed of (Mg + Fe)-rich amorphous material with visible MgO nodules and/or periclase. View Full-Text
Keywords: fly ash; bottom ash; petrography classification; magnesioferrite; periclase fly ash; bottom ash; petrography classification; magnesioferrite; periclase
►▼ Show Figures 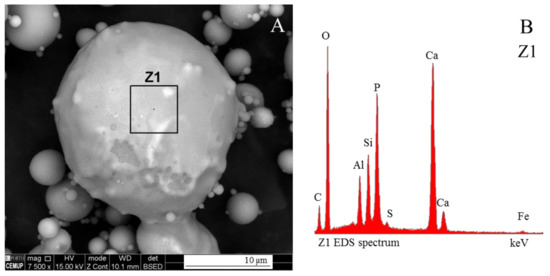