The explosion caused by detonation of explosive materials is followed by release of a large amount of energy. Whereby, a greater part of energy is used for rock destruction, and part of energy, in the form of seismic wave, is lost in the rock mass causing rock mass oscillation. Investigations of the character and behavior of the pattern of seismic wave indicate that the intensity and nature of the seismic wave are influenced by rock mass properties, and by blasting conditions. For evaluation and control of the seismic effect of blasting operations, the most commonly used equation is that of M.A. Sadovskii. Sadovskii’s equation defines the alteration in the velocity of rock mass oscillation depending on the distance, the quantity of explosives, blasting conditions and geological characteristics of the rock mass, and it is determined based on trial blasting for a specific work environment. Thus, this paper offers analysis of the method for determination of parameters of the rock mass oscillation equation, which are conditioned by rock mass properties and blasting conditions. Practical part of this paper includes the experimental research carried out at Majdanpek open pit, located in the northern part of eastern Serbia and the investigations carried out during mass blasting at Nepričava open pit, located in central Serbia. In this paper, parameters n and K from Sadovskii’s equation were determined in three ways—models in the given work environment. It was noted that, in practice, all three models can be successfully used to calculate the oscillation velocity of the rock masses. View Full-Text
Keywords: working environment; blasting; seismic effect; rock mass oscillation velocity working environment; blasting; seismic effect; rock mass oscillation velocity
►▼ Show Figures 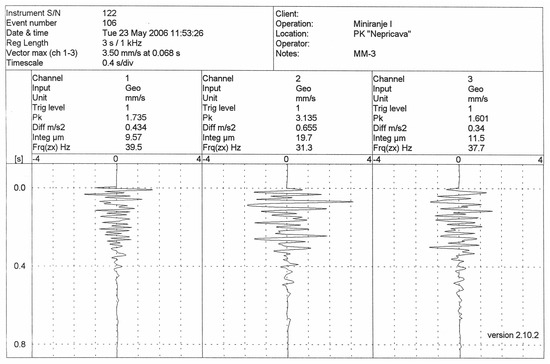