Bioelectrochemical Changes during the Early Stages of Chalcopyrite Interaction with Acidithiobacillus Thiooxidans and Leptospirillum sp.
Next Article in Special Issue

Fluid–rock interaction experiments between a biotite-rich schist (from Mt. Calamita Formation, Elba Island, Italy) and B-bearing aqueous fluids were carried out at 500–600 °C and 100–130 MPa. The experiments have been carried out in order to reproduce the reaction, which would have produced tourmalinisation of the biotite schist, supposedly by circulation of magmatic fluids issued from leucogranitic dykes. The reacting fluids were either NaCl-free or NaCl-bearing (20 wt %) aqueous solutions, with variable concentration of H3BO3 (0.01–3.2 M). The experimental results show that tourmaline (belonging to the alkali group) crystallise under high-temperature and upper crustal conditions (500–600 °C, 100–130 MPa) when H3BO3 concentration in the system is greater than 1.6 M. The composition of tourmaline is either dravitic (Mg-rich) or schorlitic (Fe-rich), depending if an NaCl-bearing or NaCl-free aqueous solution is used. In the first case, a significant amount of Fe released from biotite dissolution remains in the Cl-rich solution resulting from the experiment. By contrast, when pure water is used, Na/K exchange in feldspars makes Na available for tourmaline crystallisation. The high concentration of Fe in the residual fluid has an important metallogenic implication because it indicates that the interaction between the saline B-rich fluid of magmatic derivation and biotite-rich schists, besides producing tourmalinisation, is capable of mobilising significant amounts of Fe. This process could have produced, in part or totally, the Fe deposits located close to the quartz–tourmaline veins and metasomatic bodies of the Mt. Calamita Formation. Moreover, the super-hot reservoir that likely occurs in the deepest part of the Larderello–Travale geothermal field would also be the site of an extensive reaction between the B-rich fluid and biotite-bearing rocks producing tourmaline. Thus, tourmaline occurrence can be a useful guide during deep drilling toward a super-hot reservoir. View Full-Text
Keywords: tourmaline; synthesis; Elba Island; fluid–rock interaction experiments; schist; Mt. Calamita Formation tourmaline; synthesis; Elba Island; fluid–rock interaction experiments; schist; Mt. Calamita Formation
►▼ Show Figures 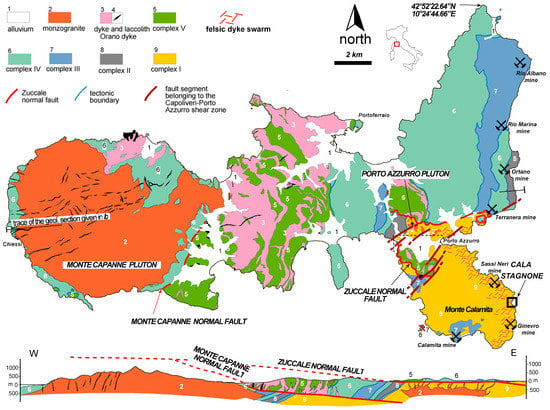