Geochemical Significance of Clay Minerals and Elements in Paleogene Sandstones in the Center of the Northern Margin of the Qaidam Basin, China
Next Article in Special Issue

Mineralogy and Geochemistry of Sr-Bearing Phosphates from the Nanping No. 31 Pegmatite (SE China): Implications for Sr Circulation and Post-Magmatic Processes in Granitic Systems
Previous Article in Journal

The Chemical State and Occupancy of Radiogenic Pb, and Crystallinity of RW-1 Monazite Revealed by XPS and TEM

Monazite ((Ce, La, Nd, Th)PO4) is one of the widely used minerals for U–Th–Pb dating in geochronology. To better understand the possible effects of radiogenic Pb on the in situ dating method, a natural monazite U–Th–Pb standard sample (RW-1) was chemically and structurally characterized down to atomic scales by using the combination of Raman spectrum (RM), X-ray photoelectron spectroscopy (XPS), and transmission electron microscopy (TEM). The experimental results revealed that radiogenic Pb exists as Pb2+ and substitutes for the Ce site in the monazite crystal lattice. Moreover, TEM imaging demonstrated that monazite is well crystalline revealed by an atomic structure in most areas except for a few tiny defects, which are likely attributed to alpha self-healing from an electronic energy loss of α particles. The characterization of the chemical state and occupancy of radiogenic Pb, and the distribution of Pb and Th in monazite at the nanoscale and atomic scale could provide insight for us to understand the mechanisms of the nanogeochronology. View Full-Text
Keywords: monazite; radiogenic Pb; TEM; XPS; nano-geochronology monazite; radiogenic Pb; TEM; XPS; nano-geochronology
►▼ Show Figures 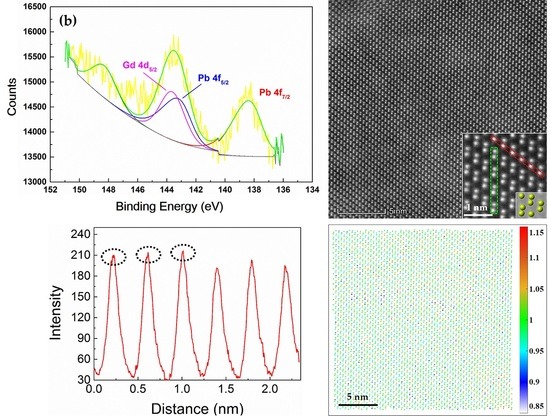