A rare massive yellowish-green serpentinized dunite, covering a minimum area up to ~50 m2, has been found in Ji’an County, Jilin Province, Northeast China. It contains primary olivine and secondary serpentine (antigorite) and brucite. Other primary minerals like orthopyroxene, clinopyroxene, and aluminum-rich phase (such as garnet, spinel, and plagioclase), frequently appearing in ultramafic rocks, have not been identified. The olivine is essentially pure forsterite, with an Mg# (100 × Mg/(Mg + Fe)) of ~99.6–99.7. Due to these distinct features, we especially name the protolith of this dunite as jianite (集安岩). The forsterite grains range up to ~2 mm, show clear equilibrium textures such as nearly straight grain boundaries and ~120° dihedral angles at their triple junctions, and display no intragranular or intergranular composition variations. They are extensively ruptured and hydrated (i.e., serpentinized), with the fractures (and the grain boundaries as well) filled by fine-grained antigorite (ideally Mg6(Si4O10)(OH)8) and brucite (ideally Mg(OH)2). These secondary phases are also extremely poor in Fe, indicating a good chemical equilibrium with the forsterite. The serpentinization reaction may have proceeded as forsterite + fluid = antigorite + brucite at temperatures of ~425(25) °C and at relatively low but undetermined pressures. The fluid was likely a B-rich, but Si-poor dilute aqueous fluid, as implied by the trace element characteristics and water-related infrared features of the forsterites in equilibrium. The petrogenesis of the jianite is presently unclear. View Full-Text
Keywords: antigorite; brucite; massive dunite; forsteritic olivine; hydration; jianite antigorite; brucite; massive dunite; forsteritic olivine; hydration; jianite
►▼ Show Figures 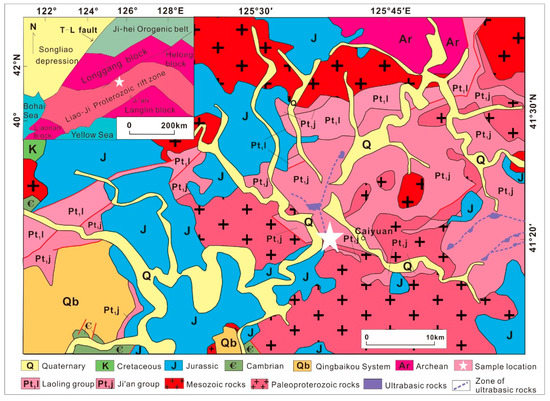