In the present study, the influence of the sampling density on the coestimation error of a regionalized, locally stationary and geo-mining nature variable is analyzed. The case study is two-dimensional (2D) and synthetic-type, and it has been generated using a non-conditional Sequential Gaussian Simulation (SGS), with subsequent transformation to Gaussian distribution, seeking to emulate the structural behavior of the aforementioned variable. A primary and an auxiliary variable with different spatial and statistical properties are constructed using the same methodology. The collocated ordinary cokriging method has been applied, in which the auxiliary variable is spatially correlated with the primary one and it is known exhaustively. Fifteen sampling densities are extracted from the target population of the primary variable, which are compared with the simulated values after performing coestimation. The obtained results follow a potential function that indicates the mean global error (MGE) based on the sampling density percentage (SDP) (). View Full-Text
Keywords: collocated ordinary cokriging; sampling density; regionalized; local stationary variables collocated ordinary cokriging; sampling density; regionalized; local stationary variables
►▼ Show Figures 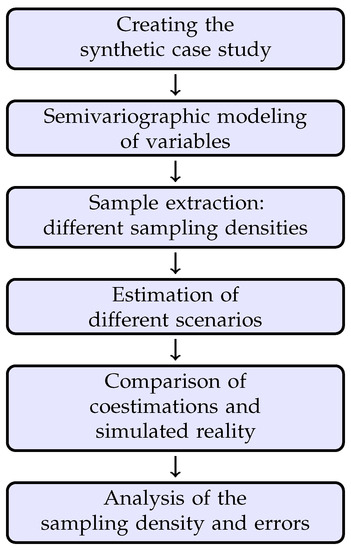