Volcanic and Saline Lithium Inputs to the Salar de Atacama

The Li-rich brine contained within the halite body of the Salar de Atacama is uncommon for two reasons: First, it has an exceptionally high Li concentration, even compared to other closed basins in the Li triangle of South America; and second, it is widespread within the halite nucleus and not restricted to a localized area. This study focusses on the southern half of the salar where Li production occurs and draws comparisons with its northern neighboring basin through which the Loa river flows. Concentration and isotope data for water inflowing to this part of the salar were obtained from surface inflow as well as wells located within the alluvial fans on its eastern margin. Lithium varies between 0.2 and 20 mg/L before reaching the salar where small amounts of the brine and or salts that precipitated from it can increase its concentration up to 400 mg/L or higher. The δ7Li of the inflow water varies between +4.9‰ and +11.2‰ and increases to +12.6‰ within the salar margin, consistent with salar brine based on reported measurements. Boron isotopes indicate that it is unlikely that solutes are derived from sedimentary evaporites or mineral cements, unlike the situation in the adjacent Loa basin. Water that flows through an aquifer laterally confined by a basement block and a line of volcanoes has a notably higher δ7Li than other inflow water, around +9‰, and increasing to +10.5‰. δ7Li values are overall higher than were measured in the adjacent Loa basin, indicating that here the water–rock reactions for Li are more evolved due to longer residence times. Lithium concentrations increased with sodium and chloride, but sedimentary evaporites are shown to be unimportant from δ11B. This is accounted for two ways: evaporated saline inflow leaks from higher elevation basins and inflows are partly derived from or modified by active volcanic systems. Active and dormant volcanoes plus the massive Altiplano–Puna magmatic body are important as heat sources, which enhance water–rock reactions. The large topographic difference between the mean elevation of Altiplano on which these volcanoes sit and the salar surface allows hydrothermal fluids, which would otherwise stay deep below the surface under the modern arc, to uplift at the salar. View Full-Text
Keywords: lithium isotopes; boron isotopes; volcanism; water–rock interaction lithium isotopes; boron isotopes; volcanism; water–rock interaction
►▼ Show Figures 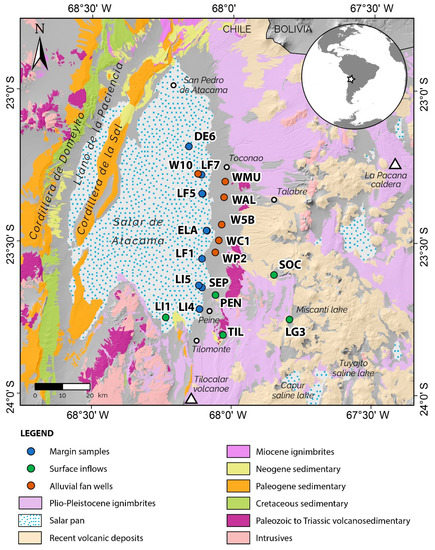