Microbial Interaction with Clay Minerals and Its Environmental and Biotechnological Implications

Miocene tuffs preserved in argillaceous sediment interbedded with lacustrine successions are commonly encountered throughout the Dinarides Lake System (DLS) in south-eastern Europe. In this contribution the volcanic glass degradation and co-genetic Mn-Fe precipitation were studied in a 14.68 Ma felsic tuff from DLS Livno-Tomislavgrad Basin. Microbial activity has been involved in both reactions thus adding the interest of revealing effects of biotic and abiotic processes taking place during tuff eogenesis. X-ray diffraction and electron microbeam analysis with energy-dispersive X-ray spectroscopy revealed the pitting or granular structures developed at glass rims along with smectite flakes protruding from a degrading glass. Mn-Fe mineralization emerges in the form of Mn-Fe coatings, an initial step to micronodule formation, where traces of biogenetic influence included a high content of phases rich in structural Mn (IV) (i.e., ranciéite and jacobsite) and presence of microbial microfossils. Co-genetic ties between glass degradation and Mn-Fe precipitation were established through the report of dioctahedral smectite formed out of altered glass; which then served as nuclei of the ongoing biotic and abiotic Mn-Fe mineralization. These processes manifest on a continuous involvement of microbial life in the course of eogenesis of pyroclastic material in lacustrine environments. View Full-Text
Keywords: felsic glass alteration; smectitization; Mn-Fe micronodules; biomineralization felsic glass alteration; smectitization; Mn-Fe micronodules; biomineralization
►▼ Show Figures 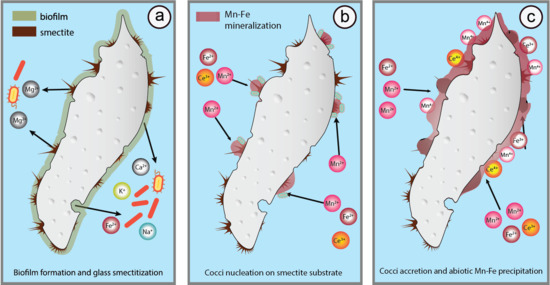