In this study, a facultative anaerobic strain isolated from marine sediments and identified as Citrobacter freundii, was used to induce the precipitation of carbonate and phosphate minerals in the laboratory under anaerobic conditions. This is the first time that the ability of C. freundii ZW123 to precipitate carbonate and phosphate minerals has been demonstrated. During the experiments, carbonic anhydrase, alkaline phosphatase and ammonium released by the bacteria not only promoted an increase in pH, but also drove the supersaturation and precipitation of carbonate and phosphate minerals. The predominant bio-mediated minerals precipitated at various Mg/Ca molar ratios were calcite, vaterite, Mg-rich calcite, monohydrocalcite and struvite. A preferred orientation towards struvite was observed. Scanning transmission electron microscopy (STEM) and elemental mapping showed the distribution of magnesium and calcium elements within Mg-rich calcite. Many organic functional groups, including C=O, C–O–C and C–O, were detected within the biominerals, and these functional groups were also identified in the associated extracellular polymeric substances (EPS). Fifteen kinds of amino acid were detected in the biotic minerals, almost identical to those of the EPS, indicating a close relationship between EPS and biominerals. Most amino acids are negatively charged and able to adsorb cations, providing an oversaturated microenvironment to facilitate mineral nucleation. The X-ray photoelectron spectroscopy (XPS) spectrum of struvite shows the presence of organic functional groups on the mineral surface, suggesting a role of the microorganism in struvite precipitation. The ZW123 bacteria provided carbon and nitrogen for the formation of the biotic minerals through their metabolism, which further emphasizes the close relationship between biominerals and the microorganisms. Thermal studies showed the enhanced thermal stability of biotic minerals, perhaps due to the participation of the bacteria ZW123. The presence of amino acids such as Asp and Glu may explain the high magnesium content of some calcites. Molecular dynamics simulations demonstrated that the morphological change and preferred orientation were likely caused by selective adsorption of EPS onto the various struvite crystal surfaces. Thus, this study shows the significant role played by C. freundii ZW123 in the bioprecipitation of carbonate and phosphate minerals and provides some insights into the processes involved. View Full-Text
Keywords: anaerobic environment; Citrobacter freundii; biomineralization mechanism; Mg/Ca ratio; struvite; vaterite anaerobic environment; Citrobacter freundii; biomineralization mechanism; Mg/Ca ratio; struvite; vaterite
►▼ Show Figures 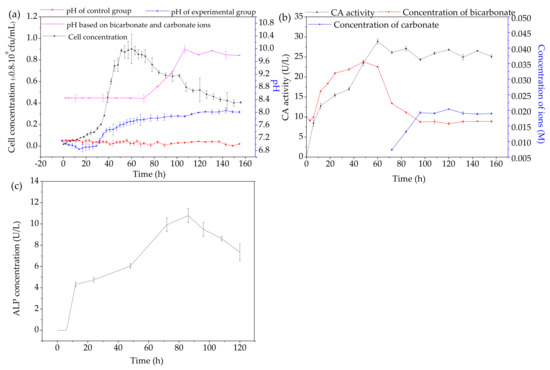