The deposit occurs in a mid-Miocene monzonite magmatic complex represented by three different intrusions, namely Intrusion 1 (INT#1), Intrusion 2 (INT#2, INT #2A), and Intrusion 3 (INT#3). Gold mineralization is hosted in all intrusions, but INT#1 is the best mineralized body followed by INT#2. SEM-CL imaging has identified two different veins (V1 and V2) and four distinct generations of quartz formation in the different intrusions. These are: (i) CL-light gray, mosaic-equigranular quartz (Q1), (ii) CL-gray or CL-bright quartz (Q2) that dissolved and was overgrown on Q1, (iii) CL-dark and CL-gray growth zoned quartz (Q3), and (iv) CL-dark or CL-gray micro-fracture quartz fillings (Q4). Fluid inclusion studies show that the gold-hosted early phase Q1 quartz of V1 and V2 veins in INT#1 and INT#2 was precipitated at high temperatures (between 424 and 594 °C). The coexisting and similar ranges of Th values of vapor-rich (low salinity, from 1% to 7% NaCl equiv.) and halite-bearing (high salinity: >30% NaCl) fluid inclusions in Q1 indicates that the magmatic fluid had separated into vapor and high salinity liquid along the appropriate isotherm. Fluid inclusions in Q2 quartz in INT#1 and INT#2 were trapped at lower temperatures between 303 and 380 °C and had lower salinities between 3% and 20% NaCl equiv. The zoned Q3 quartz accompanied by pyrite in V2 veins of both INT#2 and INT#3 precipitated at temperatures between 310 and 373 °C with a salinity range from 5.4% to 10% NaCl eq. The latest generation of fracture filling Q4 quartz, cuts the earlier generations with fluid inclusion Th temperature range from 257 to 333 °C and salinity range from 3% to 12.5% NaCl equiv. The low salinity and low formation temperature of Q4 may be due to the mixing of meteoric water with the hydrothermal system, or late-stage epithermal overprinting. The separation of the magmatic fluid into vapor and aqueous saline pairs in the Q1 quartz of the V1 vein of the INT#1 and INT#2 and CO2-poor fluids indicates the shallow formation of the Kışladağ porphyry gold deposit. View Full-Text
Keywords: SEM-CL imaging; fluid inclusion; porphyry Au deposit; Kışladağ; Turkey SEM-CL imaging; fluid inclusion; porphyry Au deposit; Kışladağ; Turkey
►▼ Show Figures 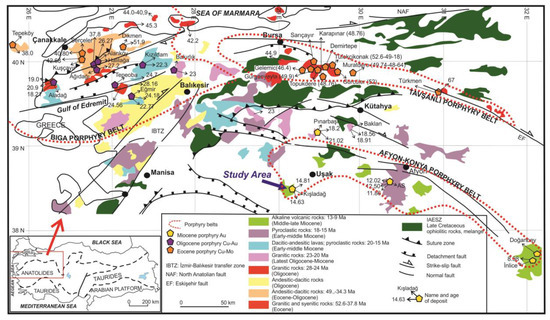