:
This study was conducted to evaluate the strength and volume change characteristics of a sedimentary residual soil mixed with bentonite (S1) when treated with three different enzymes. In addition, three reference clays including bentonite, illite, and kaolinite were also treated with enzymes to study the effect on their strength characteristics. Soil samples prepared at the optimum moisture content (OMC) were sealed and cured for four months. After curing, reference clays were tested for unconfined compressive strength (UCS). For swell tests, the S1 soil samples were placed on porous stones, which were immersed in water to allow capillary soaking of the samples. S1 samples were allowed to dry at ambient temperature for shrinkage test until the rate of reduction in volume became negligible. On completion of swell tests, the samples were tested for UCS to determine the decrease in strength due to saturation. No increase in strength and decrease in volume change were observed for any of the enzymes and dosages. Field Emission Scanning Electron Microscope (FESEM) showed some dense packing of particles for treated samples, whereas X-ray diffraction (XRD) did not reveal any change; in fact, the pattern for untreated and treated soil samples were indistinguishable.
Keywords:
soil; enzymes; swell; shrinkage; stabilization

The detail of three enzymes and soils (three reference clays and one blended soil) used in this study is as follows:

Enzymes are usually reformulated from other products; therefore, to eradicate the chances of obtaining the same product the three enzymes selected for this study were procured from three different countries. These enzymes are DZ-1X® (DZ) (Boron Innovations Pvt. Ltd. Ahmedabad, India), EarthZyme® (EAR) (Cypher Environmental Ltd., Winnipeg, MB, Canada) and TerraZyme® (TER) (Nature Plus, Inc., Stratford, CT, USA) respectively. The properties determined in laboratory and the information enclosed in Material Safety Data Sheet (MSDS) are given in Table 1 [14]. The enzyme dosages are designated as D1 (proposed by the supplier), D2 (two times of the proposed dose), D5 (five times of the proposed dose) and D10 (ten times of the proposed dose).
The recommended application rates of different enzymes by the suppliers are stated in different terms and units. For that very reason, it would be advantageous to describe the following two terms:
Since the proposed dosages by the suppliers were too low to accurately measure, it was therefore decided to dilute the concentrated enzymes with water before mixing with soil. Suppliers’ proposed dosages, DMR, AMR and diluted application ratios (DAR) for S1 (maximum dry density taken for these calculations was 1675 kg/m3) are given in Table 2. As different dosages (D1, D2, D5 and D10) of enzymes were used to prepare soil samples, the quantity of the DMR increased accordingly. For example, the “5/1000” DMR proposed for DZ by the supplier increased to “25/1000” to prepare DZ-D5 samples.

Three common reference clays namely kaolinite, illite, and bentonite were selected for the study. Kaolinite and illite clays were obtained from Kaolin (Malaysia) factory under the trade names of “S-300” and “KM800” respectively. Bentonite used in this study is a high swell sodium bentonite containing sodium montmorillonite, which was procured from Linachem Selangor Malaysia.
Different properties of three reference clays i.e., kaolinite, illite and bentonite as provided by the suppliers and additionally determined by conducting various geotechnical laboratory tests following the relevant American Society for Testing and Materials (ASTM) recommended procedures and equipment are listed in Table 3.

Another soil chosen for this study was Universiti Kebangsaan Malaysia (UKM) soil. The UKM soil is a sedimentary residual soil classified as CL by plasticity chart. Gradation curve of UKM soil is given in Figure 2. UKM soil was mixed with 10% bentonite for different tests and it is designated as S1 in this study. This mixing percentage was chosen due to very low hydraulic conductivity of bentonite. Higher quantity of bentonite would increase the time required for volume change tests considerably. Kabir and Taha [38] and Taha and Taha [39] used the UKM soil in their experimental studies. Some of the indices and properties of UKM soil and S1 (UKM soil + 10% bentonite) and different properties of UKM soil determined by Kabir and Taha [38] and Taha and Taha [39] are given in Table 4 for comparison. When the values are compared with the results of previous studies, there are slight differences among the values which are inevitable in these tests and thus are acceptable.
Enzymes may work well for soils containing 12 to 24% clay fraction with plasticity index between 8 and 35 [13]. Thus, UKM soil is quite appropriate for enzymes performance.

This section covers results of five tests conducted in the study including three-dimensional swell test, Shrinkage Test, Unconfined compressive strength test, Field Emission Scanning Electron Microscope (FESEM) and XRD to discuss the performance of soil before and after addition of enzymes.

UCS tests were conducted for S1 (UKM soil mixed with bentonite) and three reference clays. After considering the results of previous investigations where generally small sized samples (3.8 cm to 7.6 cm) were used due to easy availability of Shelby tubes, it was decided to prepare larger samples (stabilization of clay soils with non-traditional additives, stabilization of silty sand with non-traditional additives). The samples were prepared in Proctor mold and cured for four months before testing. After completion of swell test, the soaked samples were tested for UCS as well by following ASTM D2166 procedure (Standard Test Method for Unconfined Compressive Strength of Cohesive Soil). The unsaturated (unsoaked) UCS results of S1 are given in Figure 7. The UCS of untreated samples was 143 kPa. The maximum strength of 150.18 kPa was recorded for EAR-D5 and TER-D5 samples, resulting in an increase of 5%. This increase cannot be considered to be notable improvement in strength and similarly soaked UCS tests did not reveal any improvement in strength too (Figure 8). Figure 9, Figure 10 and Figure 11 show the UCS for three reference clays i.e., bentonite, illite, and kaolinite, respectively. The results are consistent and did not show any improvement in strength for different soils. Maximum increase in UCS was 3.94%, 7.78% and 8.68% for bentonite, illite, and kaolinite, respectively.
Shankar, Rai [24] and Venkatasubramanian and Dhinakaran [23] found considerable increase in UCS for soils treated with enzymes. A maximum increase of 450% and 400% was observed by Shankar, Rai [24] and Venkatasubramanian and Dhinakaran [23], respectively. Shankar, Rai [24] used TerraZyme in their study which is one of the enzymes used in this study. In their studies many-fold increase in strength was reported yet results were not supported by identifying any chemical reaction between soil and enzyme.

This study has been designed to analyze the performance of enzymes on strength and volume change characteristics of clayey soils. The effects of three enzymes on volume change (swell and shrinkage) and strength characteristics of clayey soils were evaluated. Standard Proctor test was conducted to determine optimum moisture content and maximum dry density of different soils. Then the same test was carried out to formulate controlled untreated and treated soil specimens (S1 and three reference clays) with four different dosages of three enzymes and cured for four months. Samples of UKM soil mixed with bentonite (S1) were tested for volume change (shrinkage and swell tests) and UCS on soaked and unsoaked samples, whereas for reference clays UCS test was carried out. XRD tests were conducted to identify any chemical change, if occurred. After completion of swell test, the soaked samples were tested for UCS as well by following ASTM D2166 procedure (Standard Test Method for Unconfined Compressive Strength of Cohesive Soil). The UCS of untreated samples was 143 kPa. The maximum strength of 150.18 kPa was recorded for EAR-D5 and TER-D5 samples, resulting in an increase of 5%. This increase cannot be considered to be notable improvement in strength and similarly soaked UCS tests did not reveal any improvement in strength too. Shrinkage potential of untreated samples was recorded 8.47%. Among the treated samples, the values are marginally higher but still lower than the shrinkage of untreated samples. It was observed that all three enzymes did not produce any significant improvement in different tests conducted for the study. Even, very high dosages of three enzymes did not bring any considerable improvement in three reference clays. Little improvement, in some cases, can be associated with the hypothesis that the enzymes do not produce any chemical change, though they only avert moisture absorption to carry the particles closer. Therefore, in case of using invalidated stabilizer it is essential to check its appropriateness before using it on larger scale.

This research was funded by Ministry of Education Malaysia through Universiti Kebangsaan Malaysia.

The authors gratefully acknowledged the Ministry of Education Malaysia for their initial financial support for the research project through Universiti Kebangsaan Malaysia under the project code DPP-2014-047 and the Centre for Research & Instrumentation Management (CRIM) for XRD and FESEM tests. 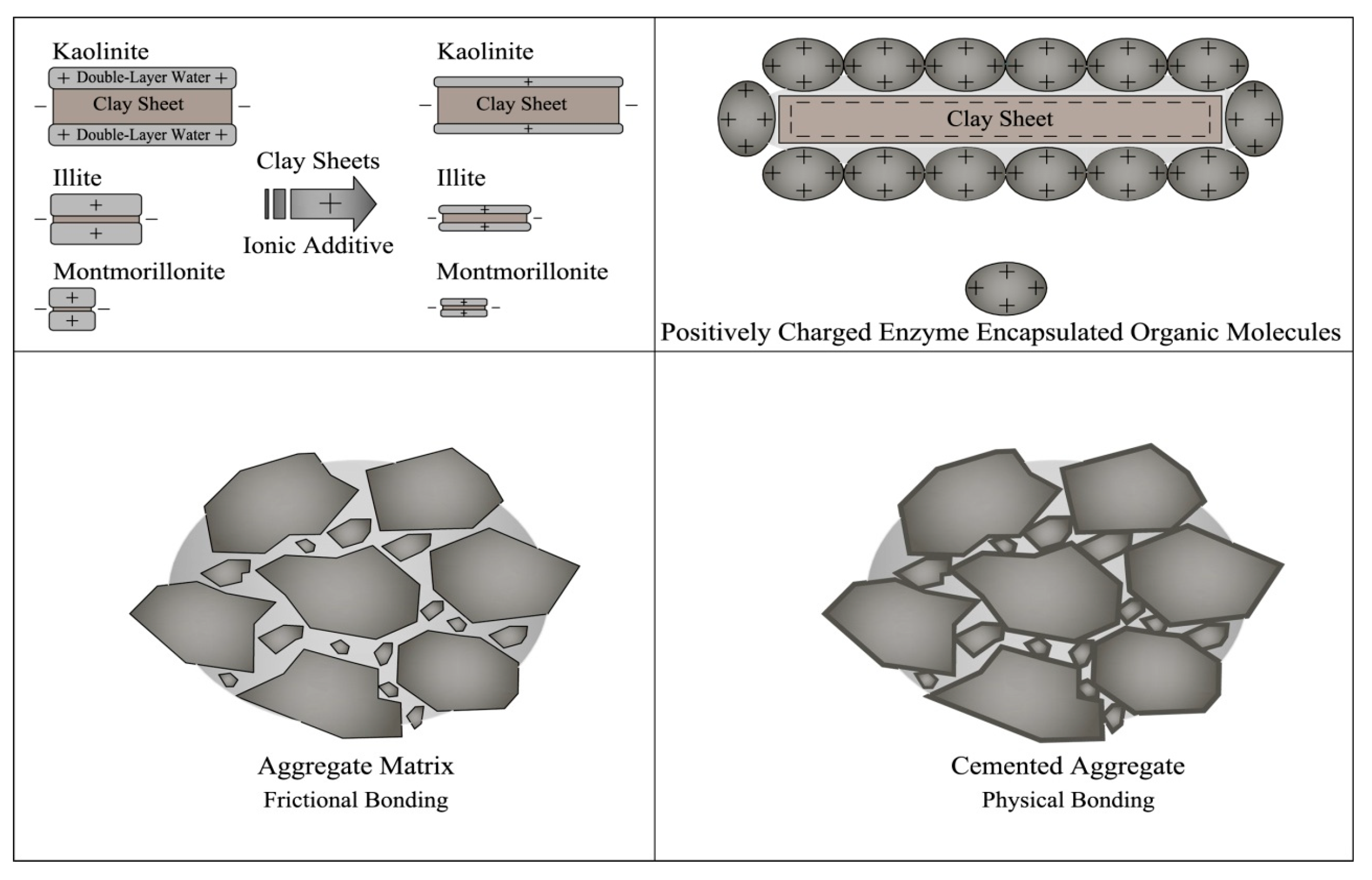 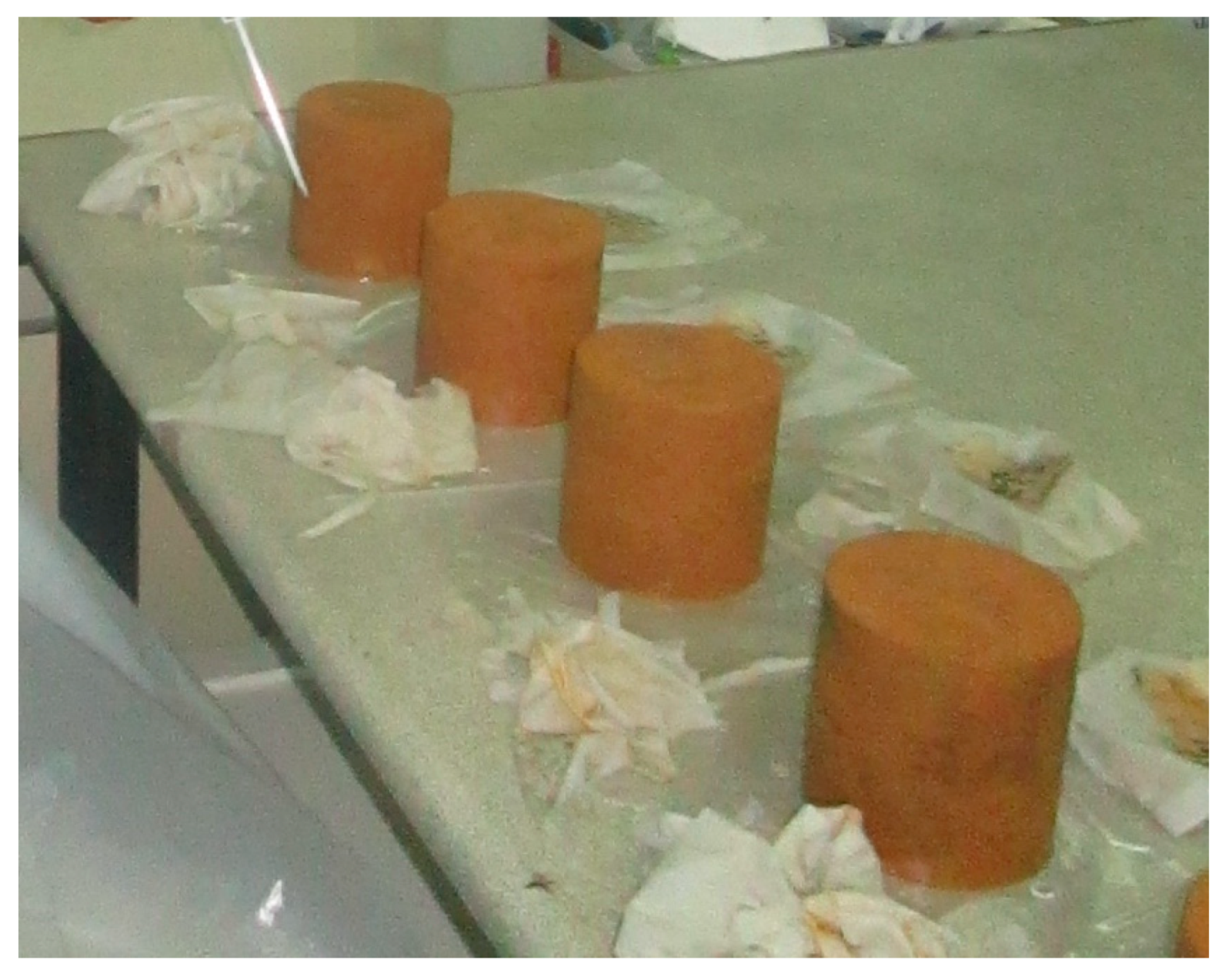 Table 4. Characteristics of UKM and S1 soil.
Table 4. Characteristics of UKM and S1 soil.
* Unified soil classification system (USCS). “---” means data not available.
© 2020 by the authors. Licensee MDPI, Basel, Switzerland. This article is an open access article distributed under the terms and conditions of the Creative Commons Attribution (CC BY) license (http://creativecommons.org/licenses/by/4.0/).
We use cookies on our website to ensure you get the best experience. Read more about our cookies here.
Accept
We have just recently launched a new version of our website. Help us to further improve by taking part in this short 5 minute survey here. here.
Never show this again