This study was conducted to evaluate the strength and volume change characteristics of a sedimentary residual soil mixed with bentonite (S1) when treated with three different enzymes. In addition, three reference clays including bentonite, illite, and kaolinite were also treated with enzymes to study the effect on their strength characteristics. Soil samples prepared at the optimum moisture content (OMC) were sealed and cured for four months. After curing, reference clays were tested for unconfined compressive strength (UCS). For swell tests, the S1 soil samples were placed on porous stones, which were immersed in water to allow capillary soaking of the samples. S1 samples were allowed to dry at ambient temperature for shrinkage test until the rate of reduction in volume became negligible. On completion of swell tests, the samples were tested for UCS to determine the decrease in strength due to saturation. No increase in strength and decrease in volume change were observed for any of the enzymes and dosages. Field Emission Scanning Electron Microscope (FESEM) showed some dense packing of particles for treated samples, whereas X-ray diffraction (XRD) did not reveal any change; in fact, the pattern for untreated and treated soil samples were indistinguishable. View Full-Text
Keywords: soil; enzymes; swell; shrinkage; stabilization soil; enzymes; swell; shrinkage; stabilization
►▼ Show Figures 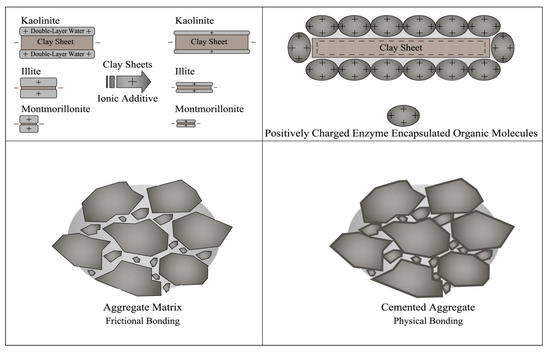