Critical Elements in Supergene Phosphates: The Example of the Weathering Profile at the Gavà Neolithic Mines, Catalonia, Spain
Previous Article in Special Issue

Making consistent and precise octahedral pressure media is crucial for reproducible high-pressure experiments in the multi-anvil press. Here we report a new approach of casting octahedra using 3D-printed molds, and pressure calibrations for octahedra both with and without pre-existing gaskets (“fins”). The 3D-printed molds for casting octahedra from either Ceramacast 584-OF or 646 cement improve the reproducibility of the octahedra and allow for a pre-existing central hole (for the high-pressure cell assembly) in the final cast product. Pressure and temperature calibrations of the octahedra have been performed based on phase transitions in bismuth (Bi) and silica (SiO2), respectively, in order to determine the efficiency and reproducibility of pressure generation and thermal insulation for cast octahedra designed for use with 18/12, 14/8, and 10/5 multi-anvil assemblies. The pressure-generating efficiency of the 14/8 and 10/5 octahedra with pre-existing gaskets, cast from the 584-OF cement, is similar to that of the corresponding COMPRES (Consortium for Materials Properties Research in Earth Sciences) octahedra, and more efficient than pre-cast octahedra made from the same material but lacking pre-existing gaskets. The efficiency of pre-gasketed 18/12 octahedra made of the 646 cement is markedly lower than those of the 584 cement. However, the 18/12 large-volume octahedra, cast (with fins) from the ZrO2-based 646 cement, also provides efficient thermal insulation. Casting octahedral solid pressure media for multi-anvil experiments using 3D-printed “injection” molds is a low-cost and low failure-rate alternative for conducting reproducible experiments at high pressure in the multi-anvil apparatus. View Full-Text
Keywords: mold; octahedron; bismuth; pressure calibration cell assembly; large volume press; 3D printer mold; octahedron; bismuth; pressure calibration cell assembly; large volume press; 3D printer
►▼ Show Figures 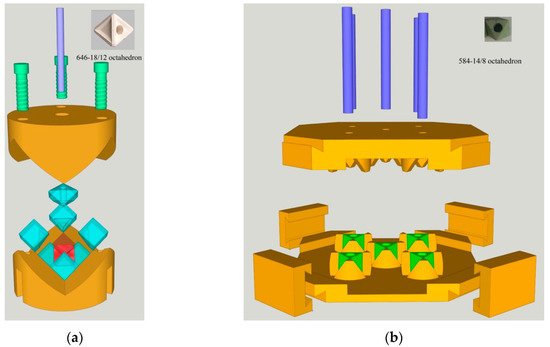