Cognitive radio (CR) has become a tempting technology that achieves significant improvement in spectrum utilization. To resolve the hidden terminal problem, collaborative spectrum sensing (CSS), which profits from spatial diversity, has been studied intensively in recent years. As CSS is vulnerable to the attacks launched by malicious secondary users (SUs), certain CSS security schemes based on the Dempster–Shafer theory of evidence have been proposed. Nevertheless, the available works only focus on the real-time difference of SUs, like the difference in similarity degree or SNR, to evaluate the credibility of each SU. Since the real-time difference is unilateral and sometimes inexact, the statistical information comprised in SUs’ historical behaviors should not be ignored. In this paper, we propose a robust CSS method based on evidence theory and credibility calculation. It is executed in four consecutive procedures, which are basic probability assignment (BPA), holistic credibility calculation, option and amelioration of BPA and evidence combination via the Dempster–Shafer rule, respectively. Our scheme evaluates the holistic credibility of SUs from both the real-time difference and statistical sensing behavior of SUs. Moreover, considering that the transmitted data increase with the number of SUs increasing, we introduce the projection approximation approach to adjust the evidence theory to the binary hypothesis test in CSS; on this account, both the data volume to be transmitted and the workload at the data fusion center have been reduced. Malicious SUs can be distinguished from genuine ones based on their historical sensing behaviors, and SUs’ real-time difference can be reserved to acquire a superior current performance. Abounding simulation results have proven that the proposed method outperforms the existing ones under the effect of different attack modes and different numbers of malicious SUs. View Full-Text
Keywords: cognitive radio (CR)networks; collaborative spectrum sensing (CSS); Dempster–Shafer theory of evidence; malicious secondary users’ detection cognitive radio (CR)networks; collaborative spectrum sensing (CSS); Dempster–Shafer theory of evidence; malicious secondary users’ detection
►▼ Show Figures 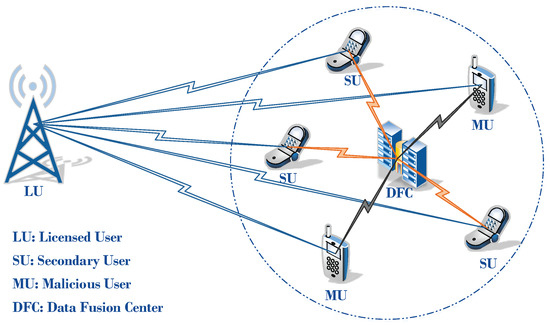