Article
Reconstructing Damaged Complex Networks Based on Neural Networks
by

Complex networks have received growing interest from various disciplines to model and study the network topology and interaction between nodes within a modeled network [1,2,3]. One of the important problems that are actively studied in the area of network science is the robustness of a network under random failure of nodes and intentional attack on the network. For example, it has been found that scale-free networks are more robust compared to random networks against random removal of nodes, but are more sensitive to targeted attacks [4,5,6]. Furthermore, many approaches have been proposed to optimize conventional networks against random failure and intentional attack compared to the conventional complex networks [7,8,9,10]. However, these approaches have been mainly concentrated on designing network topology based on various optimization techniques to minimize the damage to the network. So far, no work has been reported on techniques to repair and recover the network topology after the network has been damaged. Numerous solutions have been proposed on reconstruction of spreading networks based on spreading data [11,12,13], but the problem on the reconstruction of damaged networks due to random and targeted attacks has not been addressed before.
Artificial neural networks (NNs) have been applied to solve various problems in complex systems due to powerful generalization abilities of NNs [14]. Some of the applications where NNs have been successfully used are radar waveform recognition [15], image recognition [16,17], indoor localization [18,19], and peak-to-average power reduction [20,21]. In this paper, we propose a novel network reconstruction method based on the NN technique. To the best of our knowledge, this work is the first attempt to recover the network topology after the network has been damaged and also the first attempt to apply NN technique for complex network optimization. We formulate the network reconstruction problem as an identification of a network structure based on a much reduced amount of link information contained in the adjacency matrix of the damaged network. The problem is especially challenging due to (1) very large number of possible network configurations on the order of , where N is the number of nodes and (2) very small number of node interaction information due to node removals. We simplify the problem by the following assumptions (1) average number of real connections of a network is much smaller than all the possible link configurations and (2) link information of M undamaged networks are available. Based on these assumptions, we chose the multiple-layer perceptron neural network (MLPNN), which is one of the frequently used NN techniques, as the basis of our method. We evaluate the performance of the proposed method based on simulations in two classical complex networks (1) small-world network and (2) scale-free networks, generated by Watts and Strogatz model and Barabási and Albert model, respectively.
The rest of the paper is organized as follows. Section 2 describes the small-world network model and scale-free network, followed by the network damage model. In Section 3, we propose the reconstruction method based on NN technique. In Section 4, we present the numerical results of the proposed method, and conclusions are given Section 5.

Small-world network is an important network model with low average path length and high clustering coefficient [22,23,24]. Small-world networks have homogeneous network topology with a degree distribution approximated by the Poisson distribution. A small-world network is created based on a regular lattice such a ring of N nodes, where each node is connected to J nearest nodes. Next, the links are randomly rewired to one of N nodes in the network with probability p. The rewiring process is repeated for all the nodes n = 1 … N. By controlling the rewiring probability p, the network will interpolate between a regular lattice (p = 0) to a random network (p = 1). Figure 1 shows the detailed algorithm for small-world network construction in pseudocode format.

Scale-free networks, such as Barabási and Albert (BA) network, are evolving networks that have degree distribution following power-law model [4,5,6]. Scale-free networks consist of a small number of nodes with very high degree of connections and rest of the nodes with low degree connections. A scale-free network starts the evolution process with a small number of m0 nodes. Next, a new node is introduced to the network and attaches to m existing nodes with high degree k. The process consisting of new node introduction and preferential attachment is repeated until a network with N = t + m0 nodes has been constructed. Figure 2 shows the detailed algorithm for scale-free network construction in pseudocode format.

Neural networks are important tools that are used for system modeling with good generalization properties. We propose to use MLPNN employing backpropagation based supervised learning in this work. A MLPNN has three types of layers: An input layer, an output layer, and multiple hidden layers in between the input and output layer as shown in Figure 3. The input layer receives input data and is passed to the neurons or units in the hidden layer. The hidden layer units are nonlinear activation function of the weighted sum of inputs from the previous layer. The output of the jth unit in the hidden layer O(j) can be represented as [26] where A(j) is the activation input to jth hidden layer unit, w(i, j) is the weights from unit i to j, O(j) is the input to unit j, U(j) is the threshold of unit j, and ℑ (•) is a nonlinear activation function such as sigmoid function, as shown in Equation (3), hardlimit function, radial basis function, and triangular function. The number of units in the output layer is equal to the dimension of the desired output data format. The weights on the network connections are adjusted using training input data and desired output data until the mean square error (MSE) between them are minimized. To implement the MPLNN, the feedforwardnet function provided by the MATLAB Neural Network Toolbox was utilized. Additionally, the MPLNN weights were trained using the Levenberg-Marguardt algorithm [27].

To reconstruct the network topology of a damaged complex network due to random attack, we apply MLPNN as a solution to solve the complex network reconstruction problem. One of the key design issues in MLPNN is the training process of weights on the network connections such that the MLPNN is successfully configured to reconstruct damaged networks. Usually, a complex network topology is represented by an adjacency matrix describing interactions of all the nodes in the network. However, an adjacency matrix is inappropriate as training input data for MLPNN training process due to its complexity. Thus, we define a link list (LL) that contains binary elements representing existence of node pairs among all possible combination of node pairs , where N is the number of nodes in the network. For example, for a network with N = 4, possible node pair set is equal to, E = {(1, 2), (1, 3), (1, 4), (2, 3), (2, 4), (3, 4)}. If a network to be reconstructed has four nodes and four links given by E = {(1, 2), (1, 4), (2, 3), (3, 4)}, then LL = [1 0 1 1 0 1], where 1 s represents the existence of the four specific links among six possible ones. To obtain the training input data, M networks are damaged by randomly removing f percent of N nodes in a network. As shown in Figure 4, the proposed method consists of the following modules: Adjacency matrix of damaged network input module, adjacency matrix to link list transformation module, MLPNN module, and network index to adjacency matrix transformation module. In the second module, the adjacency matrices of the damaged networks are pre-processed into LLs that can be entered into the MLPNN. Note that the input dimension of the MLPNN is equal to the dimension of the training input data format. Thus, input dimension of the MLPNN is equal to . As for the desired output data, which is the output of the MLPNN module, binary sequence numbers are used to represent the indices of the original complex networks that have been damaged. The number of MLPNN output will depend on the number of training networks used to train the MLPNN. For example, eight binary outputs will be sufficient to represent 256 complex networks. Based on the training input data and desired output data, representing network topology of different complex networks, the goal of the MLPNN is to be able to identify, reconstruct, and produce node pair information of the original network, among numerous networks used to train the neural network. The detailed training algorithm of MLPNN is described in Figure 5.

We study and evaluate the proposed reconstruction method based on the probability of reconstruction error PRE described in Section 2. For the network damage model, we assume random attack process, where nodes are randomly removed with attached links. The MLPNN used in our method has two hidden layers with 64 neurons in the first layer and four neurons in the second layer. The nonlinear activation function in the hidden layer is chosen to be triangular activation function. The number of inputs to the MLPNN depends on the number of nodes in the network. To train and test the MLPNN, using complex networks with N = 10, N = 30, and N = 50, the number of inputs are set equal to the possible number of node pair combinations, which are 45, 435, and 1225, respectively. As for the number of outputs, eight are chosen to represent maximum number of 256 complex networks. The training input and output data patterns are randomly chosen from LL of M damaged complex networks with different percentage f of failed nodes out of total N nodes and corresponding indices of the complex networks.

This research was supported by Basic Science Research Program through the National Research Foundation of Korea (NRF) funded by the Ministry of Education (2017R1D1A1B03035522). 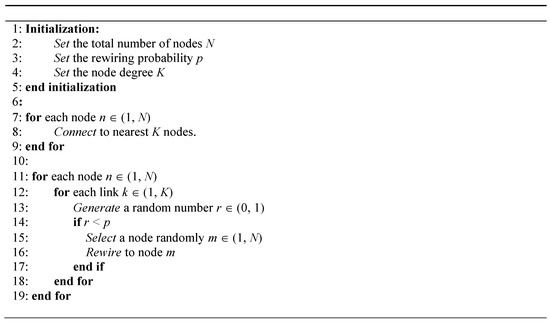 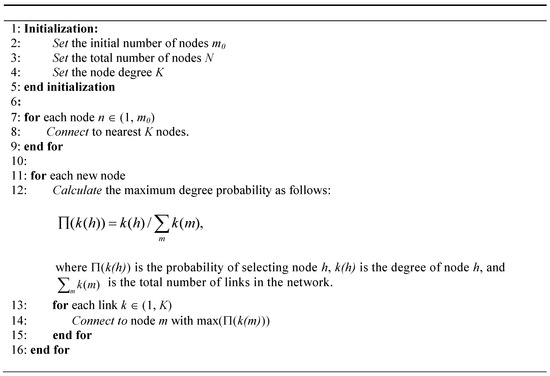 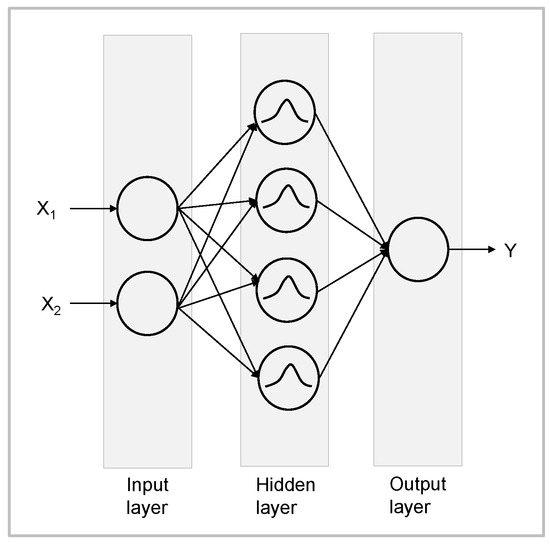 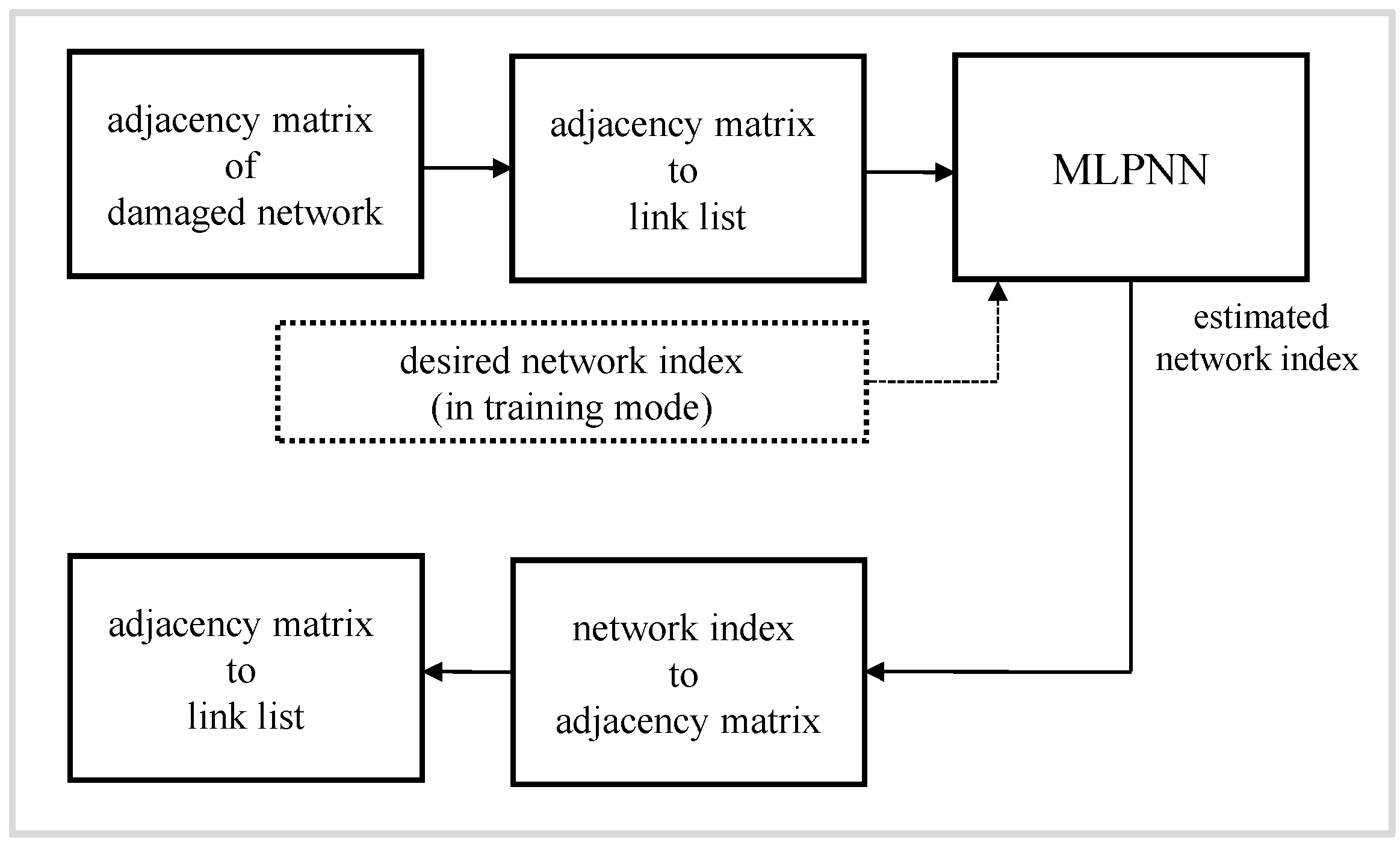 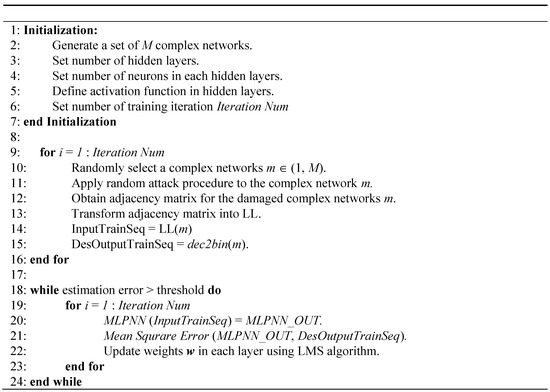 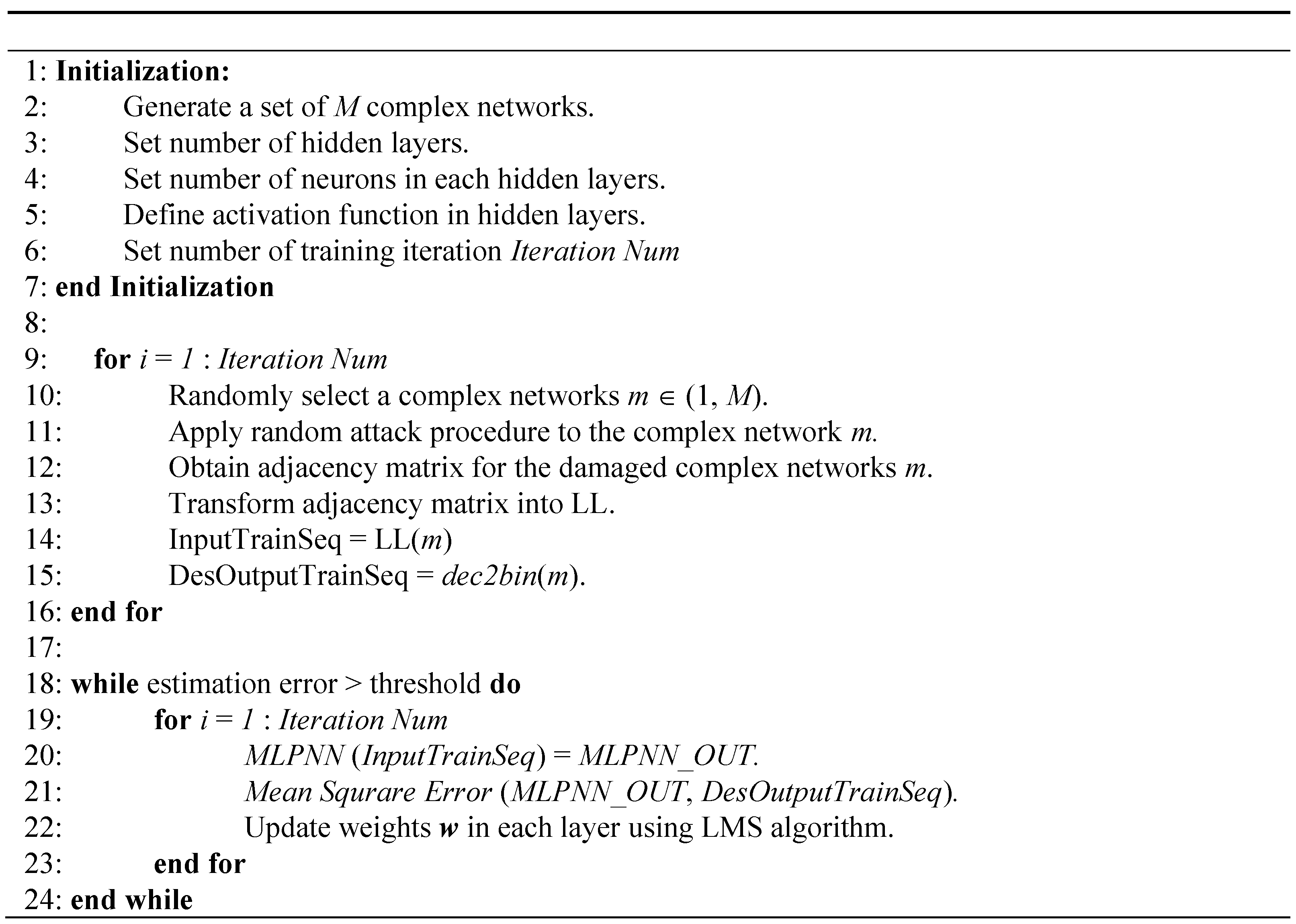 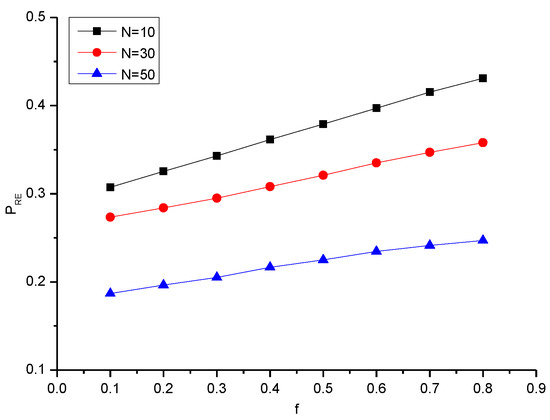 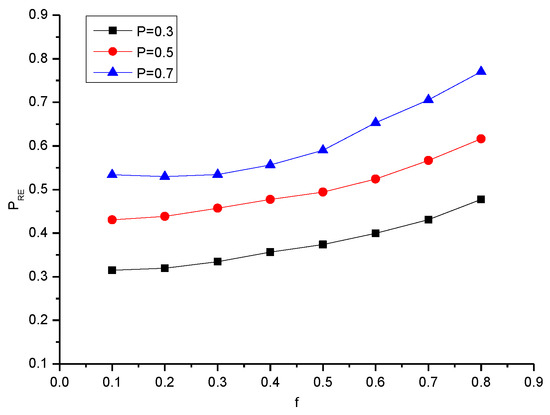 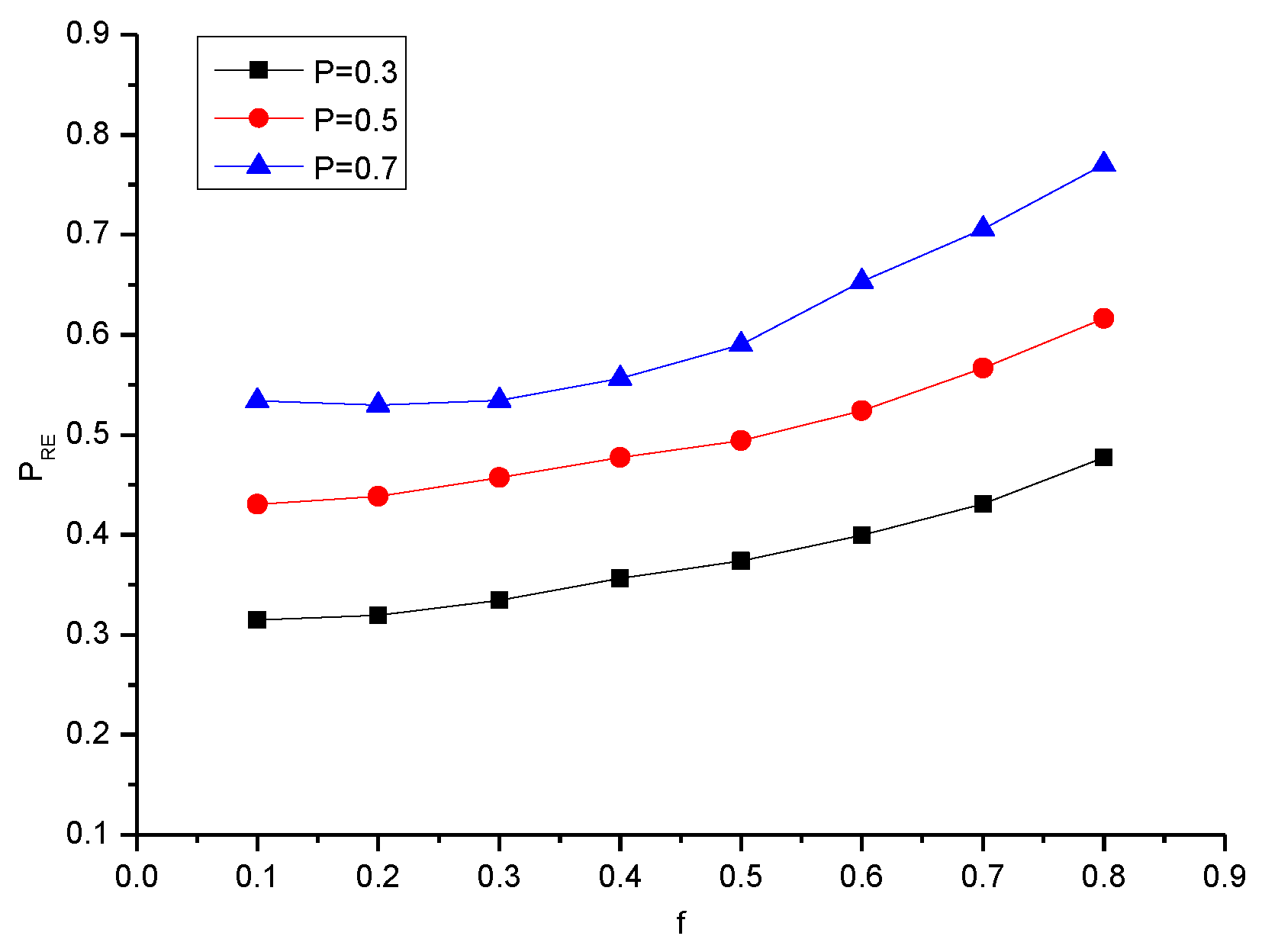 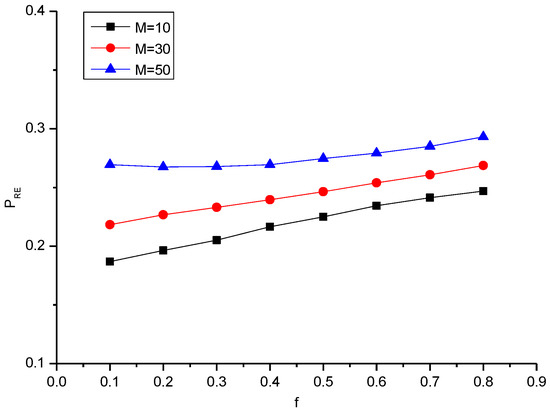 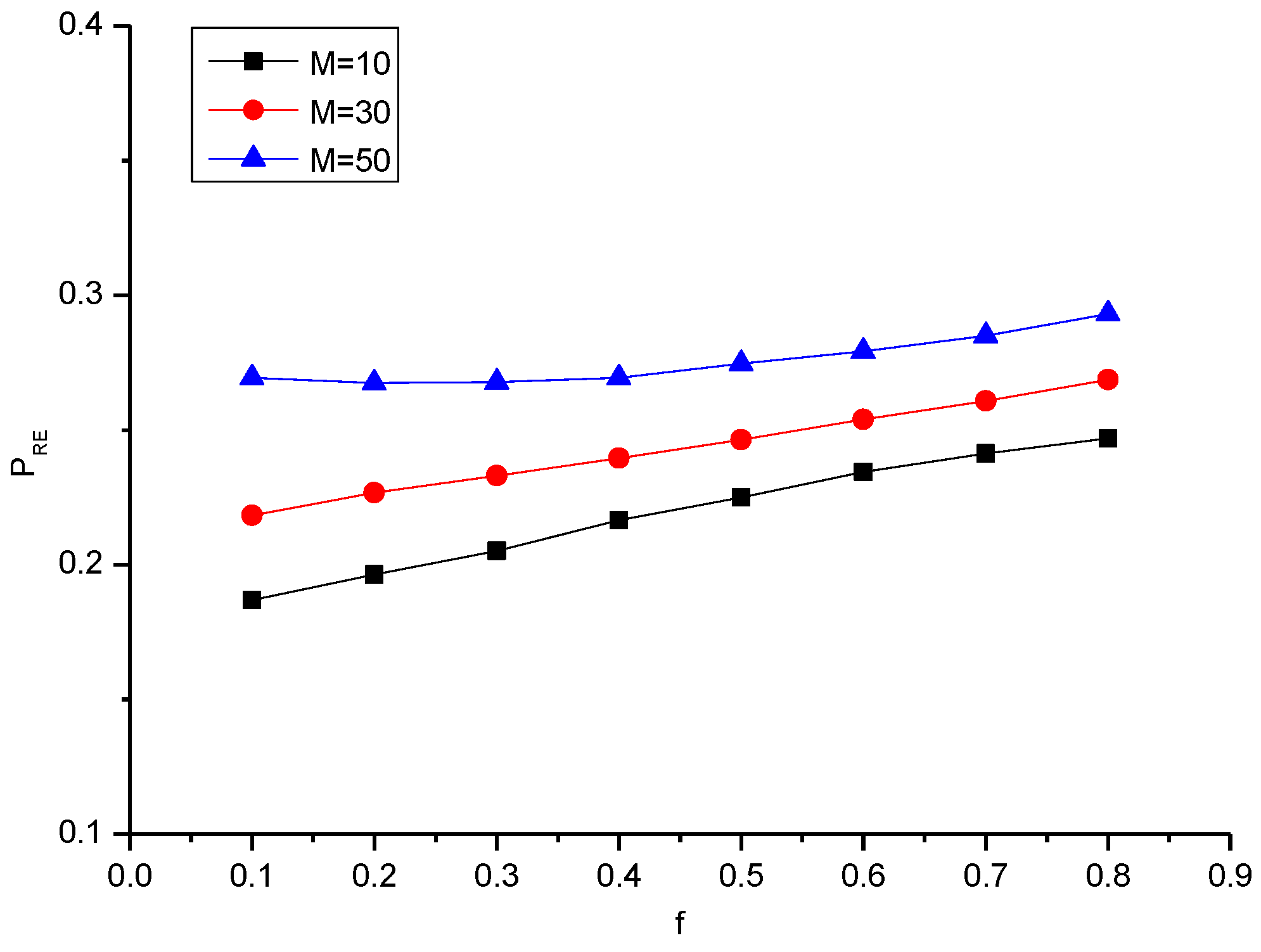 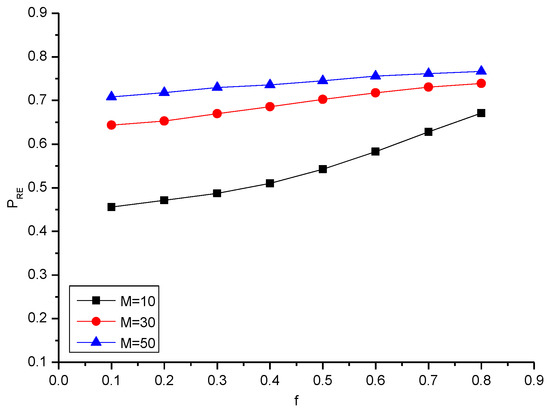 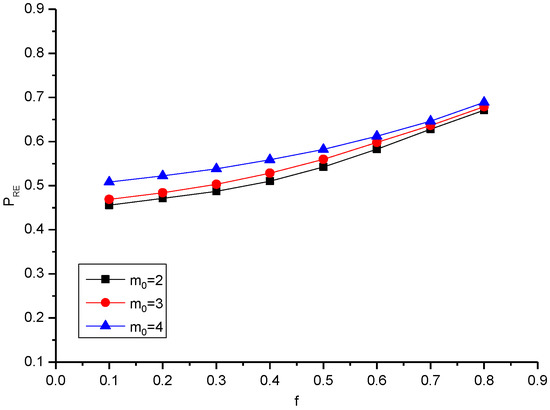 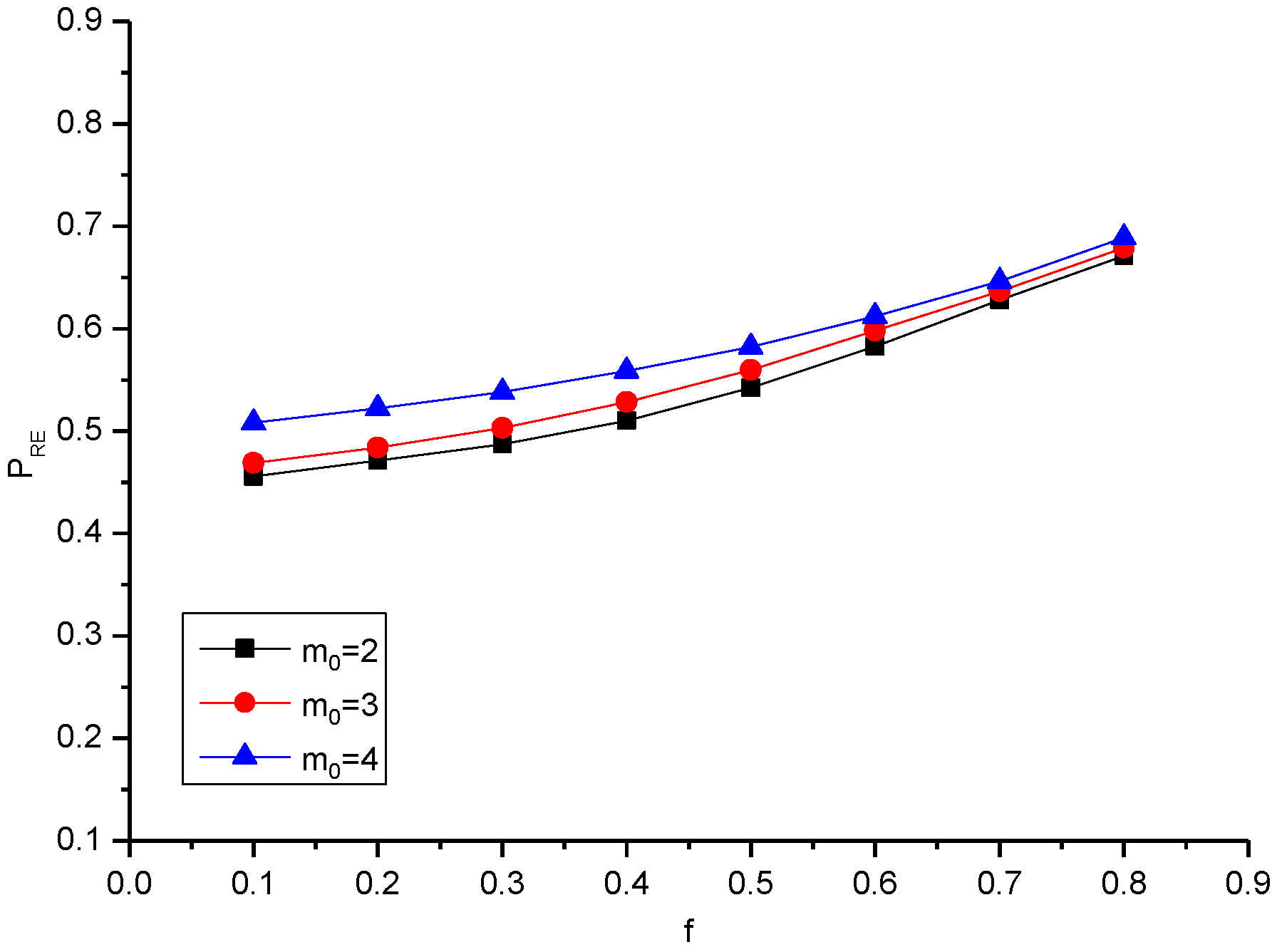